What's the difference between a nurse and an 'extremist'? Depends what you wear on your head - Canary 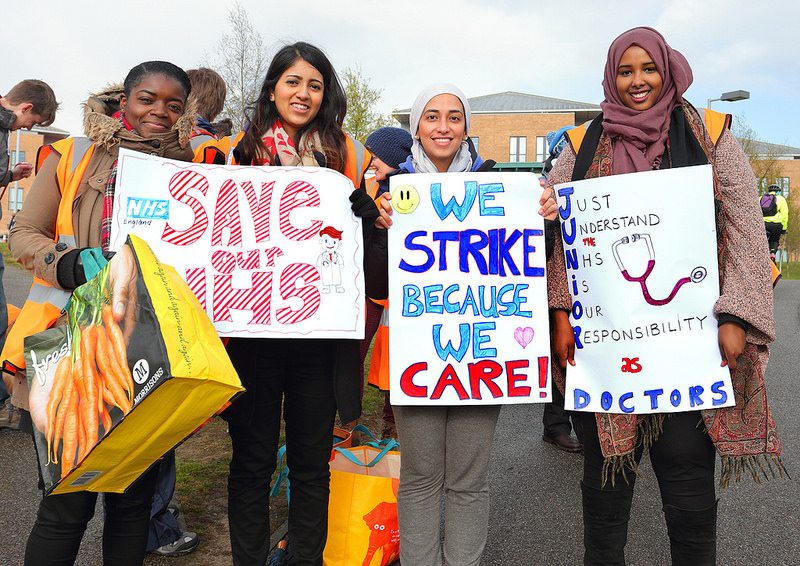 Britain’s under-resourced healthcare workers are under siege. So it’s no wonder they resort to strike action or protests to demand more funding, despite the risk of blacklisting or other sanctions. Now, in a shocking story, a health worker felt forced to resign from her job after being visited at home by the counter-terrorism police. Why? Simply because she had worn a head scarf at the hospital where she worked. That was enough to see her labelled a potential extremist.

But what is even more concerning is that the country’s largest health provider has incorporated a political monitoring culture. And it permeates every level, of every NHS Trust, throughout the country.

We’re in a time where the far right and the more xenophobic media are fostering hate and distrust. And these trends dovetail with the total surveillance systems boasted by GCHQ. So it’s not surprising if a version of McCarthyism is now apparent. Or that the government intends to force all patients to present identity documents when seeking healthcare.

A vast army of snoopers

Half a million civil servants have had training to spot what is loosely called an ‘extremist’, or someone who may become one. And 150,000 NHS ‘safeguarding’ staff are responsible for looking out for possible extremists. Not just among their colleagues, but patients too. This snooping programme is a core part of the British government’s Prevent strategy.

According to BBC 5 Live, the NHS has referred over 400 people to the Prevent programme. But the National Police Chiefs’ Council (NPCC) admits that only 10% of these referrals – i.e. 40 people – resulted in further preventative action.

The NHS’s Prevent sub-group is a core part of the ‘Safeguarding programme’ [controlled document]. That programme is essential in ensuring protection for vulnerable people – the elderly, the young, the disabled.

Pages 21 and 22 of the Safeguarding document refer to an NHS ‘toolkit’ called Health WRAP (Workshop to Raise Awareness about PREVENT). Every NHS Trust – as well as non-NHS providers – must have a Prevent lead, as well as Health WRAP facilitators. Many NHS staff have also had training in Health WRAP.

Here – exclusive to The Canary – is a decrypted copy of the Health WRAP workshop script. That script advises on how to spot ‘radicalisation’ by examining targets’ behaviour. This behaviour is split into three types: emotional, verbal, and physical/circumstantial. It all appears very crude and open to misunderstanding. (Read about the experience of one nurse who attended a Health WRAP training course here.)

The training varies in cost. Livewell Southwest, which charges £15 per person, explains how it will also roll the course out to staff in schools, colleges and universities.

Doctors, under the Terrorism Act 2000, must already contact police should they believe a patient is involved in terrorism. But not all NHS staff are happy with their new snooping role.

Dr Derek Summerfield, a consultant at South London and Maudsley NHS Trust and honorary senior lecturer at the Institute of Psychiatry, commented on how Prevent was leading to “a duplicitous deviation from the medical assessment, advice and treatment that has brought the patient to us”.

The government is trying to pitch Prevent as an extension of ordinary safeguarding practices, but in reality it’s a perversion of ethical medical practice. It encourages us to essentially spy on our patients.

And there could well be a knock-on effect from the deployment of Prevent in mental health.

In March 2016, the National Union of Teachers (NUT) called for the scrapping of Prevent over concerns that it causes “suspicion in the classroom and confusion in the staffroom”.

This is not surprising given examples of over-zealousness by teachers targeting youngsters as ‘extremists’. For example, one case saw a ten-year-old boy reported to the police for saying he would like a prayer room at his school.

Indeed, it’s been reported that, via Prevent, more than 400 children aged 10 and under have been identified as being at risk of extremism. And a further 1,424 youngsters aged 11 to 15 were identified as at risk of being radicalised.

Prevent came from the Association of Chief Police Officers (ACPO), later replaced by the NPCC. It is now run by the Office for Security and Counter Terrorism (OSCT). OSCT Director-General Thomas Hurd is the son of former Conservative minister Douglas Hurd and, according to one source, an intelligence insider. OSCT directly contributes to the Health WRAP training modules.

Prevent has also targeted protest groups, including the Occupy movement, which merely want a more equitable society, and anti-fracking protesters.

So are we indeed now witnessing a new form of McCarthyism? Or is this just a version of blacklisting? Or both?

– Read more on what the police are up to from Netpol.