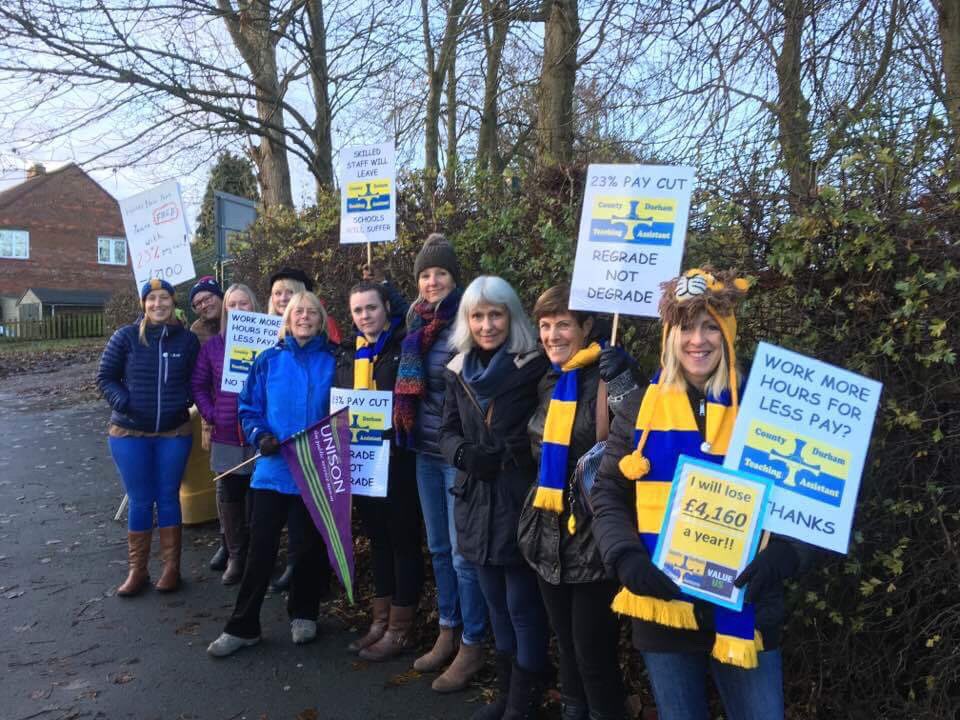 More than a thousand teaching assistants are on strike from 23 to 24 November in the latest skirmish of a long-running battle over new contracts with Durham County Council.

According to Unison, most of the strikers earn £16-18,000 a year, which is well below the current UK median salary of £27,600. But the Labour-controlled council is planning to sack them on New Year’s Eve and re-employ them the very next day on far worse contracts.

Under the new contracts, they could lose up to 23% of the salaries. This would mean the women would have to get by with up to £5,000 less a year.

A Unison official close to the dispute told The Canary that it was “extremely rare” for a Labour-controlled council to threaten to sack its own staff in pay disputes.

Birmingham and Derby are the only Labour local authorities that are known to have taken such an aggressive approach, more suited to anti-union corporations.

The dismissals are due to take effect on New Year’s Eve with them being immediately reengaged on 1 January. Not a pleasant start to the New Year for them.

But the women, who are Unison members, have refused to be cowed by the council’s tactics. This week’s action follows a strike earlier this month and a high profile campaign, which has met with Shadow Chancellor John McDonnell and Shadow Education Secretary Angela Rayner.

Caroline Neill, a Durham teaching assistant, told The Canary that the council’s actions were insulting to loyal staff, who regularly work over their contracted hours:

It’s a kick in the teeth after doing a job for eight years. It’s insulting and it’s disheartening.

She said she wouldn’t be able to afford to replace her ageing car or go on holiday if the council succeeded. And she said another teaching assistant was so afraid of the new contract that she had sold her home and moved in with her parents.

The mood among the strikers fluctuates, but they say they feel strong when they stand together on the picket line. Neill said:

The strike will affect more than 100 primary schools across County Durham. Lively picket lines will probably close some of them completely. And that’s not all. From Friday 25 November until the end of term, teaching assistants will only work to rule.

Teaching assistants hate the idea of inconveniencing parents but this is now the only way for school support workers to win the pay they deserve.

The council, however, argues that it has no choice. Jane Brown, Durham’s cabinet member for corporate services, argued that the teaching assistants’ existing contracts were “morally and legally not right”.

Teaching assistants were getting paid for more hours than they worked and were getting approximately six weeks’ holiday more than the rest of our staff.

She also claimed the council would face multi-million pound claims if it did not act.

Unison disagrees. It says it offered the council various ways to avoid such equal pay claims, but it didn’t take them up in talks.

Neill, meanwhile, believes the council doesn’t understand how hard she and her colleagues work.

We may not work during the holidays, but when we are at work we work above and beyond the hours we have been contracted to work. I’d love to be paid for the hours I work!

The teaching assistants are already low-paid, and fear more cuts would devastate them. That’s why their struggle continues.