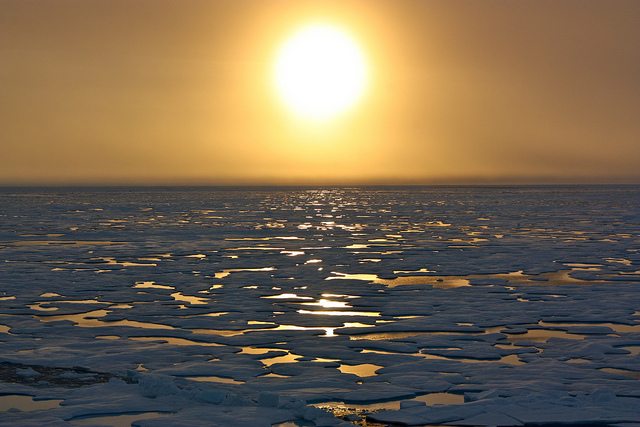 The slowing Atlantic current could contribute to temperatures plummeting in the northern hemisphere in as little as a century – much faster than we previously thought (although not quite The Day After Tomorrow). The new findings, published in Nature Geoscience, could mean it’s time for policy to step up its game.

By studying deep ocean sediments, the researchers showed that increasing surface temperatures caused oceans to slow in the last ice age, resulting in temperatures dipping fast. Given this new “paradigm shift” in the way we think about climate change, governmental approaches to its mitigation may not be taking effect quickly enough.

It’s time to get brave: the research is calling for a quicker response to climate change, and the public is ready for a tougher political stance.

Policy is often based on the best scientific knowledge we have of the likely course of climate change; the findings of the IPCC and the Kyoto Protocol have formed the basis for climate-related policy around the world. But targets that are set to meet or simply pay lip service to the Protocol, and those based on dated research, will fall short of what’s needed given today’s new findings. What can – or should – be done?

Politicians need not fear setting tougher targets: new research published in Environmental Science & Policy suggests that unilateral climate policy is unlikely to cost politicians an election. Based on experiments conducted in the USA and India, researchers from Switzerland found that 31% (US) and 64% (India) of people “support even the ‘most unilateral’ and costly policy design.”

When approaching climate change, governments tend to focus on reciprocal policies, in which they implement policies if others do too – take the Kyoto Protocol, for instance. Reciprocal policy gives governments a safety net: everyone’s doing it so they’re not risking losing voters by signing up to widely accepted policies.

On the other hand, politicians have shied away from tougher unilateral policies that may be more costly, for fear of losing favour with the public. But in their paper, the Swiss researchers conclude that politicians can afford to be brave: “Overall, these findings suggest that, in view of very slow progress in global climate policy, governments of rich and poor countries could politically afford to push ahead with more ambitious unilateral climate policies,” they say.

A “paradigm shift” in climate thinking

Today’s evidence supporting the role of ocean currents in climate change puts forward a new way of thinking that should have an impact on how we approach the mitigation of climate change.

Oceans are powerful climate controllers. Covering more than 70% of the planet, they store around 90% of the earth’s carbon dioxide (far more than the atmosphere) and can take up and release the gas slowly or quickly. Currents driven by winds and ocean temperature move carbon dioxide and heat around the world. Any changes at the poles – including an influx of water from melting ice – can therefore influence other parts of the world.

A team of scientists from the University of Cambridge studied ice cores and fossilised plankton shells to get a picture of how changes in the ocean influenced temperature in the last ice age,70,000 to 19,000 years ago. Taking samples from the deep South Atlantic, between the southern tip of South America and the southern tip of Africa, they found that during the last ice age ocean currents slowed and were connected to a drop in global temperature.

Water from the North Atlantic is less corrosive than water from the South Atlantic, so studying the way fossilised shells dissolve over time can indicate water movement and currents. During the ice age, temperatures in the northern hemisphere  fluctuated between cold and warm about every 1500 years – a phenomenon known as the Dansgaard-Oeschger variability.

To determine the link between ocean current and temperature, the team compared current patterns shown by the dissolution of fossilised shells with ice-core temperatures in Greenland. They found a strong link between the two, with changes in the current leading to temperature changes within 100-200 years.

So what was going on? As the atmosphere warmed, icebergs may have broken off the North American and Eurasian ice sheets and caused an influx of fresh water into the ocean. The currents would have slowed rapidly, leading to sea ice forming around Greenland and the temperature dropping in a matter of a century.

The researchers compared their findings with a climate model simulation by scientists at the University of New South Wales, Australia. The timescales revealed by the sediment analysis matched those of the model. However, they say more research is needed to determine exactly what caused the temperature drop.