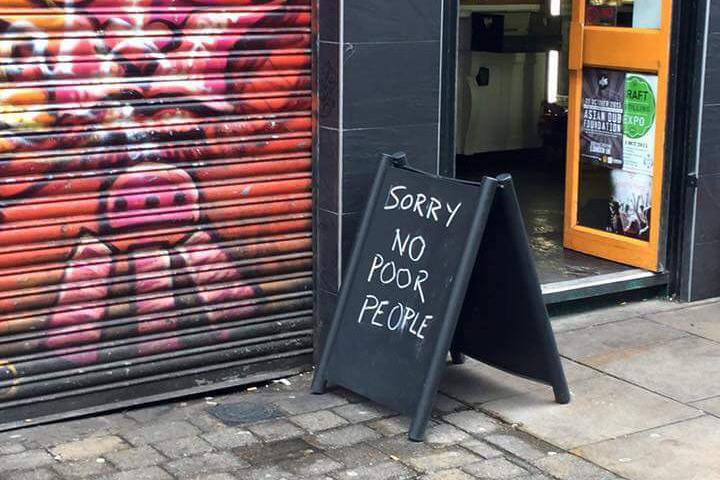 The winkle-picker shoes, novelty beards and compulsion to put every damn thing in a vintage jar were bad enough. But this latest hipster nonsense is a bridge too far. There’s nothing funny about this ‘ironic’ sign at Brick Lane Coffee.

The east London coffee shop is facing a massive backlash on Twitter and Facebook after a chalkboard sign was spotted outside the cafe earlier this week which read “Sorry, no poor people”.

The image was first posted on Twitter and Facebook by Kiko Loiacono, and has since been doing the rounds sparking up outrage wherever it lands.

“No poor people”?! Really? Are you trying for a bit of subversive newsworthiness on the backs of people who are starving?

“Or are you giant, over-privileged t***waffles? I’m guessing both .. PS I’m NEVER walking into your shop.”

Meanwhile, Sarah Alice More left a negative review for the cafe which read:

“I would go here again but their really witty and original chalk board outside says no poor people.”

“Shame. If you’re desperate for an average, overpriced coffee then there’s a Pret just up the street.”

Other users called on those expressing outrage to calm down and appreciate the apparent ‘irony’ in the sign.

The cafe claims it had no awareness of, or responsibility for the sign, but social media users are far from convinced. Earlier this year the same coffee shop displayed a chalkboard which read: “please don’t feed the crackies.”

The case comes amid wider concerns among Londoners (and the wider UK) over the rapid gentrification taking place in their high streets and residential areas. The average cost to rent a home in the UK reached an all time high of £937 per month (£11,244/year) this year, while the average in London also spiked to £2,583  per month (£30,996/year). With an average UK wage of £26,500 a year, a growing number of people are being priced out of whole cities – and the current government is taking no steps to alleviate the crisis.

With this in mind, it’s not hard to see why for those affected – and their advocates – ‘ironic’ signs are just no laughing matter.