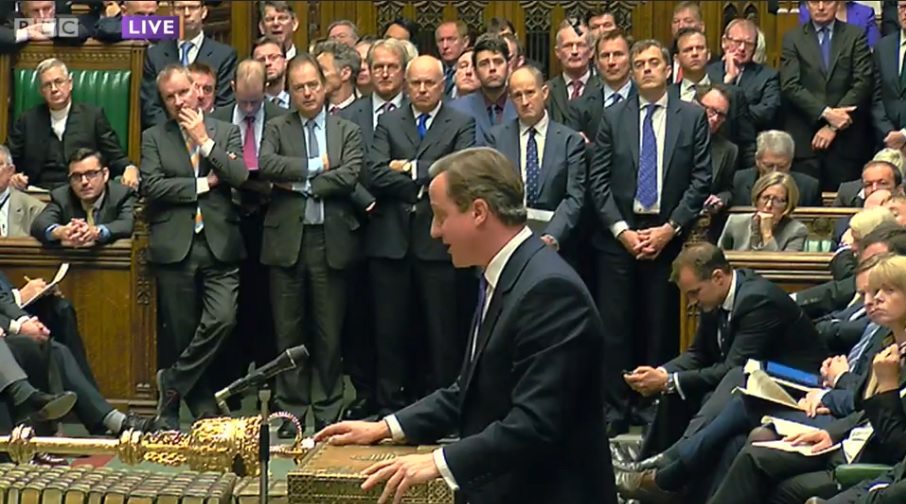 During this week’s Prime Minister’s Question time in the House of Commons, Labour Leader Jeremy Corbyn once more crowd-sourced his questions from the public and put them to David Cameron. The responses from Cameron, his front bench and the rows of heckling Conservative MPs revealed that the Nasty Party is back with a vengeance.

When Jeremy Corbyn asked a question from a single mother called Kelly who will be facing an £1800 a year loss in income due to Cameron cutting Working Tax Credits, the Prime Minister looked visibly agitated. Meanwhile, the benches behind him jeered like schoolboys: “Tom and Jerry!” someone shouted.

Next Corbyn moved on to a question on the housing crisis and spiraling rents. He’d received over 4000 questions on housing, and chose to read one from ‘Matthew’. However, the Labour leader was unable to finish the question due to the volume of laughter coming from Conservative MPs.

“This might be funny to some members, but it’s not funny to Matthew and many others.” he said before making a third attempt to get the question out.

After a blustering response from Cameron which denied any housing crisis exists, Corbyn issued a very calm: “Could I just bring the Prime Minister back to reality?” – and went on to outline the rising homelessness and rents, and the pitiful shortage of council house building.

Speaker of the House John Bercow had to step in shortly after this to silence the Conservative front bench who were crowing so loudly that PMQs couldn’t proceed.

Perhaps the entire exchange could be summed up by this comment from Corbyn in response to yet another evasive answer from Cameron.

“The Prime Minister is doing his best, and I admire that, but…”

“Inequality is getting worse not better. Shouldn’t he think for a moment about the choices he is making, and the reality for working people in the country.”

Back in October of 2002, Theresa May (then Deputy Chair of the Party, today Home Secretary) addressed a downcast Tory party conference in Bournemouth. The party had just lost its second general election in a row against New Labour, and it was difficult to see how they would ever gain power again. She said:

“There’s a lot we need to do in this party of ours. Our base is too narrow and so, occasionally, are our sympathies. You know what some people call us — the Nasty Party.”

It wasn’t until those words were heeded, and David Cameron came along with his hoodie hugging, husky riding, vote blue go green, pro-equal marriage, the NHS is “safe in my hands” rebrand that the party became electable again. Even then, with a financial crisis, and a Labour leader with all the charisma of a damp squib – they only scraped a coalition. Such was the retained association with the ‘Nasty Party.’

Five years later, with a slim majority, the party seems to have entirely scrapped all pretense at being anything else. It is as if, on news that they had defeated the moribund Labour party of Ed Miliband, the party breathed a collective sigh of relief.

“Thank god for that!” they cried. “Now we can stop all this touchy feeling nonsense and get back to being proper Conservatives!”

They seem to have already forgotten what happened the last time they made this calculation, and just how highly the British electorate made them pay for their hubris.

Just 24% of the electorate voted Conservative in the last election, 76% didn’t. The largest gains went to socially democratic populists the SNP, who killed Labour in Scotland. Even UKIP’s votes were around leveraging the cores issues, but pinning the blame on immigration rather than economic policy. The biggest losers were the Liberal Democrats, the only ‘centrist’ party in town.

Labour need to win an extra 106 seats at the next election to gain a majority, an almost impossible task. But if Corbyn’s Labour party continues to turn popular dissent on core issues – austerity, the housing crisis, poor wages and job insecurity, and income inequality – into a popular labour movement, that’s where landslides are made. As in the 1990’s, Conservative hubris is sowing the seeds of their own downfall. The nasty party is back, but they won’t be staying for long.