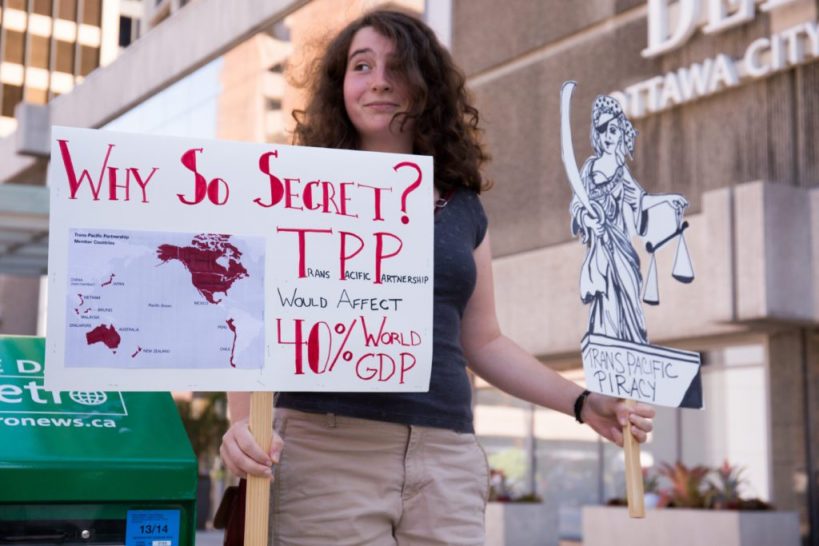 Last week, hundreds of thousands of activists marched in Berlin against the Transatlantic Trade and Investment Partnership (TTIP). A few days earlier, its sister-treaty, the Trans-Pacific Partnership (TPP), was signed.

Considered the ‘the biggest trade deal in a generation’, the latter TPP encompasses 12 nations – Vietnam, Peru, Mexico, Malaysia, Japan, Canada, Australia, US, Singapore, New Zealand, Chile and Brunei. Between them, these countries represent more than 40% of the global economy. Among the member states, the deal aims to lower trade barriers, create a common standard for intellectual property, enforce labour and environmental law standards and promote economic growth.

But critics warn that the deal is an attack on democracy which favours corporate interests, pointing to three main issues with the trade deal.

At the heart of TPP are the controversial Investor State Dispute Settlements (ISDS). These are secret tribunals in which transnational investors can sue governments for loss of profits caused by changes in legislation – even if the law concerned protects the environment or public health. These tribunals bypass domestic courts and exclude appeal.

ISDS already operates in some free trade agreements around the world. In one controversial case, tobacco giant Philip Morris sued the Australian government for millions of dollars over the introduction of plain cigarette packaging.

In 1996, the US Metalclad Corporation sued the Mexican government for closing a waste treatment facility after an audit indicated severe threats to the local water supply. The tribunal ordered the government to pay the company $16.7 million in damages.

All negotiations have been held behind closed doors. Hundreds of representatives from large corporations had direct access to the negotiations – but for elected officials, access was either limited or non-existent.

According to the Independent, in the US only members of Congress with a specific security clearance can access the documents in a special reading room. They cannot make copies or even take their own handwritten notes out of the room and are forbidden from telling anyone else what they have seen.

In Australia and New Zealand, trade representatives who gained access were to keep the text secret for four years, according to a document leaked to the Guardian.

The only parts of the deal the public has been able to read have been those that have been leaked.

Critics say the TPP seems to export some of the worst features of US copyright law to member states. One provision criminalizes revealing corporate wrongdoing “through a computer system,” which could potentially penalise whistleblowers for sharing important information, and discourage journalists from reporting on it.

Activists have also raised concerns over the effect it could have on the cost of medicines. By extending the intellectual property rights of certain branded drugs, there could be delays in the development of cheaper, generic versions of these drugs. Peter Maybarduk, Public Citizen’s Global Access to Medicines program director, says, “The new monopoly rights for big pharmaceutical firms would compromise access to medicines in TPP countries. The TPP would cost lives.”

TPP is the first of a trinity of US-backed economic treaties to be finalized. The other two are the Trade in Services Agreement (TISA), which covers 52 countries, and TTIP, the EU-US version of TPP. The same principles and processes underlie all three treaties. As Caroline Lucas, the Green MP for Brighton Pavilion, said:

In the face of a government that is unduly protective of the rights of powerful corporations, it is time to stand up for our rights as citizens.