Osborne knows nothing about Royal Mail, but that hasn’t stopped him from selling it to his friends in the City - Canary 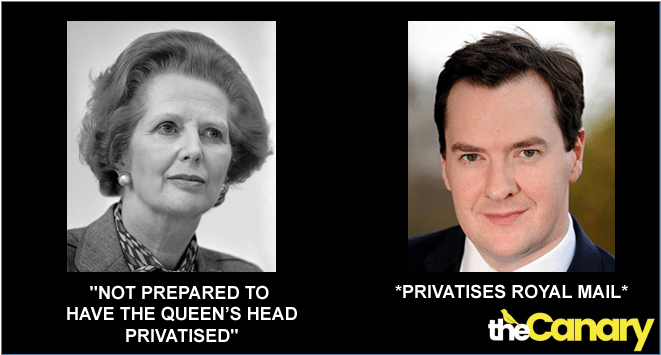 This week, Osborne has gone where even Thatcher wouldn’t go and sold off the last public stake in Royal Mail. He says the privatisation is a win for customers, the workforce and the taxpayer – but he’s wrong on every count. The only winners in this sorry tale are the hedge funds that have picked up a 500 year old institution on the cheap.

Royal Mail’s extraordinary history stretches back 500 years. During that time, it’s played a crucial role in our society, overwhelmingly as a force for good. This week, Osborne revelled in putting an end to all that:

We’ve finished process of returning @RoyalMail to private sector. Right thing to do for Royal Mail workforce, customers and the taxpayer

Osborne’s shocking grasp of history aside (Royal Mail has never been a private sector institution so it can’t be “returned” to the private sector), his Tweet is a brazen example of doublespeak: the last 30 years have shown us time and again that privatising public institutions is bad news for everybody – except the investors who buy them.

Take the railways. Since they’ve been privatised, taxpayer subsidies have skyrocketed, ticket prices have soared and the level of service has disintegrated: privatisation has simply meant the privatisation of profits and socialisation of losses.

The same will be true of Royal Mail. We can’t know what hidden subsidies it will receive in future, but we do know that the original justification for the sell-off – that it was a burden on public finances – was untrue. In the year to March 2013, Royal Mail was turning a healthy profit of £440m – profits that have now been privatised.

Meanwhile, losses in the form of pension liabilities, which the government kept hold of (complete with a £10bn deficit for future generations) have been socialised.

But we taxpayers lost out in other ways too. The first offerings of the shares were shamelessly undervalued, with MPs calculating they left the British taxpayer £1bn out of pocket. Meanwhile, the investors – including the hedge fund employing George Osborne’s best man – raked it in, prompting Simon Jenkins to write:

Never can the British taxpayer have been ripped off so soundly in so short a time.

Customers also suffer from privatisation, which is probably why two-thirds of British adults opposed Royal Mail’s privatisation. Time and again, we’ve seen privatised institutions put their costs up and lower their quality of service.

The verdict is still out on how much freedom Royal Mail will have to put up its pricing, at least in the short term (it’s being reviewed by Ofcom at the moment), but both the Royal Mail boss and its unions have expressed concern that regular postal deliveries to rural homes – in the kinds of communities that have already lost their post offices – may soon be a thing of the past, whatever the government claims about the universal postal service being protected.

Finally, members of the public were barred from buying shares in this week’s sell-off, which was only open to institutional investors – making this transfer of wealth from the many to the few Osborne’s most blatant yet.

Featured image based on images via HM Treasury and Nationaal Archief.