Tories ramp up the rhetoric ahead of massive cuts, but Labour are fighting back - Canary Workers’ Co-op 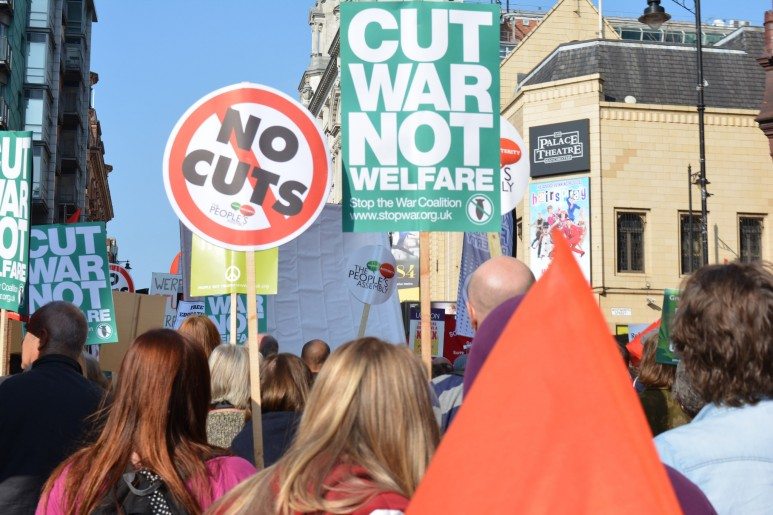 Since the general election in May, the Conservatives have become far more comfortable justifying their assault on the welfare state in more explicitly ideological terms. Their welfare policies have not changed – as the recent slashing of Tax Credits indicates – but their rhetoric has. On the other hand, Labour has drastically shifted its welfare policies since the election and has also opted to challenge the dominant narrative on benefits that they used to tacitly endorse.

When they first came into government, the Conservatives brought with them a narrative with ‘the deficit’ at its core. The arguments made by ministers were that ‘reckless’ Labour spending had resulted in a situation in which welfare needed to be curtailed because there was not enough money to fund it. Consider David Cameron’s defence of reductions in Child Benefit eligibility in 2010:

I think it is fair to ask families who are better off to make a bigger contribution to dealing with the deficit so we can protect the poorest and most vulnerable people in our country.

The line was that the welfare state exists to protect the poor and vulnerable, but that restrictions needed to be put in place because it was not possible to protect everyone in light of the deficit. Compare this to the comments emerging from the Conservative Party conference last week from a number of senior ministers and a different narrative can be observed.

That’s what the limit on child tax credit for more than two children is about – bringing home to parents the reality that children cost money and if you have more kids you have to make the choices others make and not assume taxpayers money lets you avoid the consequences of such choices. That’s taking responsibility, and that’s fair.

In a similar vein, Jeremy Hunt insisted that:

“we have to proceed with these tax credit changes because they are a very important cultural signal” that “work is at the heart of our success”.

These comments are not pragmatic arguments but are instead about the qualities of benefits claimants, and the consequences of allowing them to claim. They indicate that the Tories now feel much more confident in flaunting their true ideological colours.

On the other side of the despatch box, the Labour Party has undergone a more drastic transformation. Since the election, they have taken the ‘radical’ step of disagreeing with the government narrative on welfare. This has been a tentative progression and has been driven primarily by the Corbyn leadership. Nevertheless, a parliamentary Labour Party which predominantly abstained in the vote on the Welfare Bill in July is now certainly prepared to challenge the Tory line, as was demonstrated in today’s Prime Ministers’ Questions.

With the poorest in society set to lose on average around £1300 per year in Tax Credits after recent changes come into effect next April, the combination of more explicitly ideological Tory rhetoric and stronger policies of opposition in parliament creates an opportunity for a significant challenge to the direction of austerity politics. Let us hope that it can be seized.