Even our nuclear weapons are privatised, and it's a potential disaster - Canary 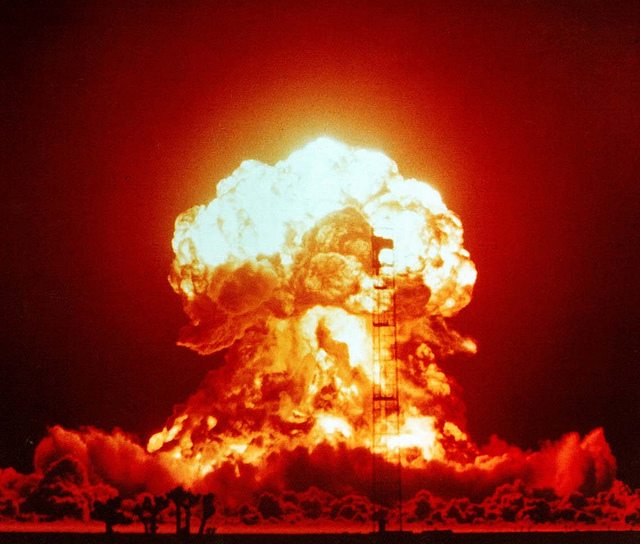 The UK, along with the US, Belgium, Germany, Italy, the Netherlands and Turkey, have private companies making and managing their nuclear weapons. Germany’s aim of reducing its arsenal was scuppered in September 2015, when the hard sell of new bombs from the USA went against the wish of the voters. One can’t help feeling that if Iran were serious about arming itself with nuclear weapons, they’d be getting a private company to do it, like everyone else.

The Nuclear Non-proliferation Treaty stipulates that signatories should work towards disarmament. However, according to Armin Krishnan, Assistant Professor for Security Studies at East Carolina University, specialising in military technology:

The next generation of nuclear weapons could be different from the submarine based system, for example low-yield nuclear gravity bombs or nuclear cruise missiles. It has been proposed by think tanks that the US should station low yield nuclear weapons in Europe and the US may supply such weapons to European allies.

Millions of people in the UK have no idea that neither the navy nor the government owns Trident, and that the maintenance, design and testing of Britain’s nuclear capabilities all come via US companies. The last of the UK’s shares in British Nuclear Fuels, and so any ownership of its nuclear fleet of two, were quietly sold off by Labour in December 2008. Essentially Trident is in private hands. In an email, Armin Krishnan confirmed that:

I don’t think that Britain’s nuclear deterrent is really independent or that it contributes much to British national security.

The arguments against private companies replacing state functions are the same whether or not it’s the NHS or nuclear weapons. Private companies have a poor record on observing the rules, and some throw money at lobbyists until they get what they want. One only has to look at the safety record of the post-Thatcher data-set amply demonstrates that the shareholder imperative means that quality and safety are not priorities. The safety scandals of Hinchingbrooke Hospital and Railtrack are small fry when compared to the scale of human suffering caused by bailing out the bankers and blaming the poor, both in the UK and the rest of Europe. The data proves that there isn’t room for profit when it comes to big expensive things on which millions of lives depend, National Health Services, the Welfare State and nuclear submarines.

Unsurprisingly, after years of being in grasping private hands, there are huge questions about the safety of these submarines. It was an open secret that they were leaking radioactive waste, and the full list of accidents makes horrifying reading, not least because there are bound to be more that they’re not telling us. Would we even know if one of these silent nuclear whales became a floating Fukushima? According to the Wikileaks testimony of William McNeilly:

We are so close to a nuclear disaster it is shocking

Tellingly, this brave whistleblower did not go to jail, despite fully expecting to. He catalogued several dangerous situations – fires, in particular, as rubbish sat by cables caught fire, as did fuel leaking from the missiles themselves. There were other examples of an almost slapdash attitude to safety and procedures. He also showed that failure to follow proper security protocols meant that almost anyone could get aboard a nuclear submarine. Not that you’d want to.

We can only hope that Corbyn is playing a long game for getting rid of Trident. After all, it isn’t even controlled by us.