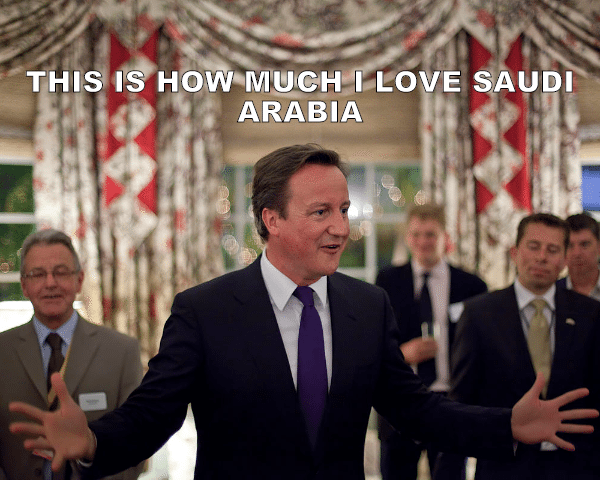 The British government is preparing to bomb Syria in support of ‘human rights and democracy’, as it did in Libya, Iraq and Afghanistan. At the same time the British establishment enacts an appalling double standard of continuing to support Saudi Arabia, a state that routinely abuses human rights.

The government recently ended its bid for a £5.9m prison deal with Saudi Arabia. This decision came to light at the same time as a British pensioner, who has served a one year sentence for having homemade wine in his car, was awaiting 360 lashes as part of his punishment. His children fear this will kill him.

Yet the Saudi state has received an abundance of British weapons since the sixties. These deals were intensified in 1985 when Margaret Thatcher negotiated the al-Yamamah deal, enabling Saudi Arabia to purchase £43bn of arms from BAE Systems. Since then, successive governments have continued trading arms with Saudi Arabia and supporting the Saudi state, despite its abhorrent abuse of the most fundamental rights.  In 2013, Saudi Arabia had more than 400 arms licenses from British firms worth £1.8bn.

Saudi abuses include sentencing a blogger to 10 years in prison and 1,000 lashes, for blogging about free speech. Human Rights Watch has a detailed list of abuses that the Saudi state has inflicted upon its people including children, who can be tried when there are signs of puberty. Charges can be brought against people for merely “breaking allegiance with the ruler” or “trying to distort the reputation of the kingdom.”

When Jon Snow recently interviewed David Cameron, he asked about Ali Mohammed al-Nimr, a 17 year old, arrested  for protesting against the government. He will be punished by crucifixion, and there are allegations he has been tortured. Snow asked Cameron as to why the UK supported Saudi Arabia joining the UN human rights council (UNHRC), when they have such a terrible record. After Cameron’s unease and inability to answer the question the first few times, he resorted to one of the favourite Conservative party lines – it was for “security” and “to keep us safe”. In essence, we need to send weapons to Saudi Arabia, vote them onto the UNHRC, and turn a blind eye to their human rights abuses for our own “security” and safety.

It is incompatible to be a proponent of democracy and human rights while still supporting and arming Saudi Arabia. Cameron is well aware of that, which is why he looks so uncharacteristically uncomfortable.