Woman drives her 4X4 into an autistic cyclist - Canary 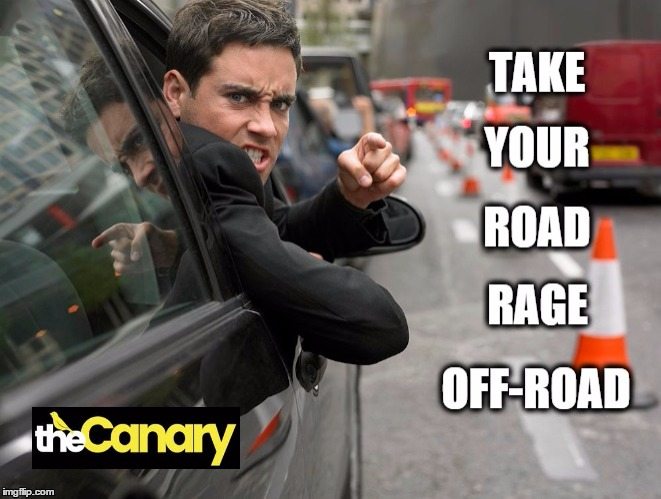 Cyclist Simon Edgley was lucky to be alive after an altercation with Natalie Pyne left his bike mangled and a shop-front completely wrecked.

What began as an argument about a near collision on Park Road, Kingston, quickly escalated when Pyne returned to her vehicle and purposefully drove at Mr Edgeley, Kingston Crown Court found on 9 October. There were five children in the car at the time of the incident.

[Pyne] intended to cause Mr Edgley very serious harm. She was reckless. She got back into the car, in anger, the red mist descended and she chose to drive into Mr Edgley.

Witnesses say that the powerful Audi Q7 collided with Edgley and his bike, he rolled over the bonnet, and the bike was crushed. The 4×4 crashed through the bay window of Park Salon causing £25,000 worth of damage. Simon Edgley escaped with only minor injuries.

Mrs Pyne was found guilty of dangerous driving, causing damage in excess of £5,000 and attempted grievous bodily harm. She will be sentenced on 5 November.

I suppose the police picked the charge of attempted GBH because they thought that is the one that would stick. I have some sympathy for people who think it should have been a harsher [charge.]  All I know is it could have been a lot worse for the cyclist involved.

Numerous reports of cyclists being pushed into oncoming traffic, pins and high wires being set in the path of bike races, intentional ramming, as well as minor, everyday experiences of abuse suggest that Britain has a persistent problem of Cyclist hatred. Some experts say that this sort of targeting mirrors the discrimination usually experienced by minorities.

A BBC article ‘The psychology of why  cyclists enrage car drivers’ suggested that drivers are enacting ‘altruistic punishment’ on cyclists who do not obey the rules of the road, that they feel generalised anger at free-riding cyclists who do not pay vehicle excise duty. Articles such as this seem to provide justification and pander to the prejudices of enraged motorists.

It’s worrying that with more cyclists on the road than ever this ‘victim blaming’ mentality abounds in the mainstream media and could be contributing to this sort of cyclist directed road-rage.

Our neighbours in the Netherlands have a very different attitude towards cycling and appear to be reaping the benefits through improved public health, quality of life and associated industries. A recent report quantifies the benefits of Dutch cycling and estimates that it has contributed to a half year improvement in life expectancy, and that the 0.5 billion euro infrastructure investment pays off 19 billion euros in national healthcare savings.

The Netherlands has an extensive cycle network that means fast moving cars and bicycles are kept separate, in the town centres it is not uncommon to see slow moving cyclists riding two or three abreast, and this is considered normal and acceptable. There are also clear rules for cyclists and fines for violations.

We need to recognise that incidents like those between Mr Edgeley and Mrs Pyne are becoming far too common on our streets and improve the cycling infrastructure. But crucially, we also need to accept the one-sidedness of the debate and recognise that the media is endangering lives by pandering to anti-cyclist prejudice.