Manchester cop tells whining Tory MP to 'get over himself' - Canary 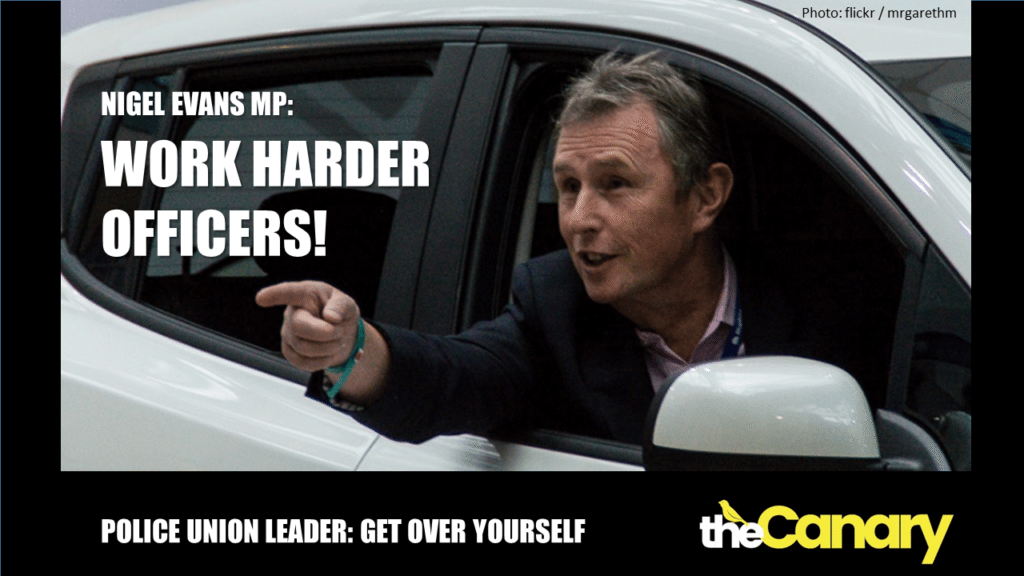 “Get over yourself Mr Evans, you are no more important than everybody else in Manchester who gave up their police officers to keep you safe.” This was the withering response from Inspector Ian Hanson to Tory MP Nigel Evans following his whining complaint in the House of Commons that police didn’t do enough to protect Conservative Party Conference delegates from public rage on the streets of Manchester. Inspector Hanson, branch Chairman of the Police Federation for Greater Manchester, reminded the Ribble Valley MP that the thin blue line would have been a bit thicker if the nearly 2,000 Greater Manchester Police officers laid off since 2010 had still been employed.

‘I think the police were incredibly even handed and fair. Many ordinary police we spoke to disliked the Tory government and its policies as much as the protestors.’ – Jan McLachlan, Norfolk People’s Assembly

Maybe the police were a bit tired after helping with the Tory conference’s booze delivery.

Mr Evans also drew criticism for his suggestion that some delegates were the victims of “hate crimes”. “Evans really needs to use his language more carefully,” said Jan McLachlan of Norfolk People’s Assembly, who was in Manchester for the duration of the conference. The view of Justice Minister Mike Penning that “no-one needed to go through the type of abuse [delegates] had to” will draw hollow laughs from anyone on the wrong end of benefit sanctions, housing discrimination or disability prejudice.

The anti-Tory gathering was determined but largely good-humoured and activists noticed a quite surprising atmosphere: “I think the police were incredibly even handed and fair,” said McLachlan. “Many ordinary police we spoke to disliked the Tory government and its policies as much as the protestors.”

Chief Superintendent John O’Hare, declaring himself proud of his officers, pointed out that “this year there has been a far greater amount of protest and direct activism than ever before which created significant challenges to an already difficult operation.” Inspector Hanson echoed these sentiments in his retort to Mr Evans: “Things got a bit uncomfortable and we dealt with it. You should be thanking the communities and police officers of Greater Manchester – not attacking them.”