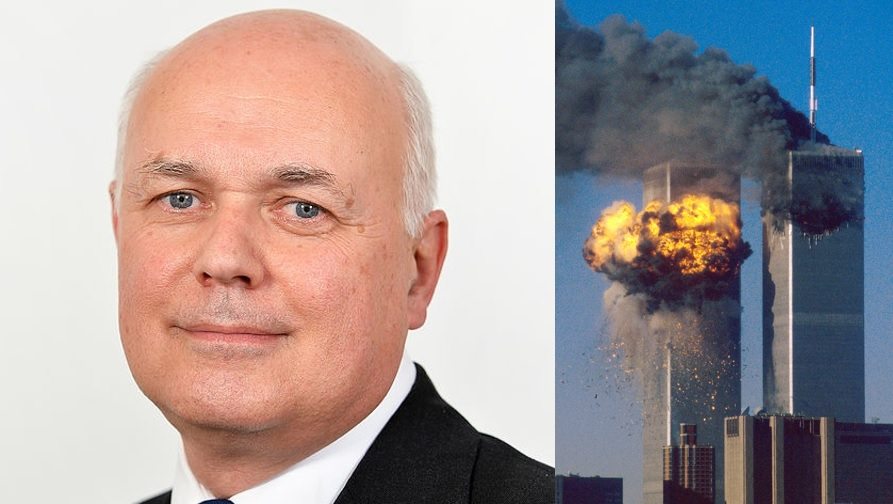 Iain Duncan Smith, the architect of austerity in the Department of Work and Pensions, has stated that he believes his ambitions to lead the country were thwarted by the terrorist attacks on the United States on September 11 2001.

Speaking at a fringe event at the Conservative party conference in Manchester this week, he said:

“The day before I got elected the twin towers were struck. So first of all we got no lift on my announcement. It had to be buried the following day, hardly anybody was paying attention.

“The following day I appeared for the statement in the House, straight in. I didn’t sleep that night, had to sort out shadow cabinet positions, got them all done, got in there and we were straight in.”

“When the nation is at war there is only one person [the public] look to. It is the prime minister because the prime minister is powerful. He is the one that directs it and Blair of course milked that for all it was worth. It was impossible for weeks and months to get anywhere near any domestic debate.. it is very difficult to make headway as leader of the opposition unless you have the playing field to fight on and that is domestic policy.”

For those who are not aware, Iain Duncan Smith spent a fairly disastrous few years as leader of the Conservative Party during the premiership of Tony Blair. He is largely considered the worst Conservative leader of all time, and that includes the shambles of William Hague’s ’24 hours to save the pound’ bus tour. He took over as leader following Hague’s defeat in the 2001 general election, and ran the party for just two years before being ousted in a Vote of No Confidence in October 2003.

As you can see in the video below, the reason IDS was ousted from his leadership and failed to become PM had nothing to do with terrorist attacks anywhere in the world. Instead, it was down to the fact that he is well to the right of much of the Tory party, let alone the public.

There are plenty of other reasons IDS will never be Prime Minister – but key among them is his sheer unlikability. He is a man who seems to ooze contempt from every pore, and have very few redeeming features. He also seems quite content to enjoy the largesse of the taxpayer and his father-in-law rather a lot for a man who claims to be opposed to ‘something for nothing’ culture:

This behaviour is made all the more contemptible in light of the bitter cuts Iain Duncan Smith has made to lifelines supporting the most vulnerable members of UK society. This string of cuts to wages and welfare have resulted in some dire outcomes. To name just three:

Iain Duncan Smith is the poster boy for bogus austerity – a mindset that endorses poverty for the many to ensure patronage for the few. Mr Duncan Smith, there are many reasons why you are not Prime Minister today, but 9/11 is not definitely not among them.