The 'sugar tax' should be swallowed by companies, not consumers - Canary 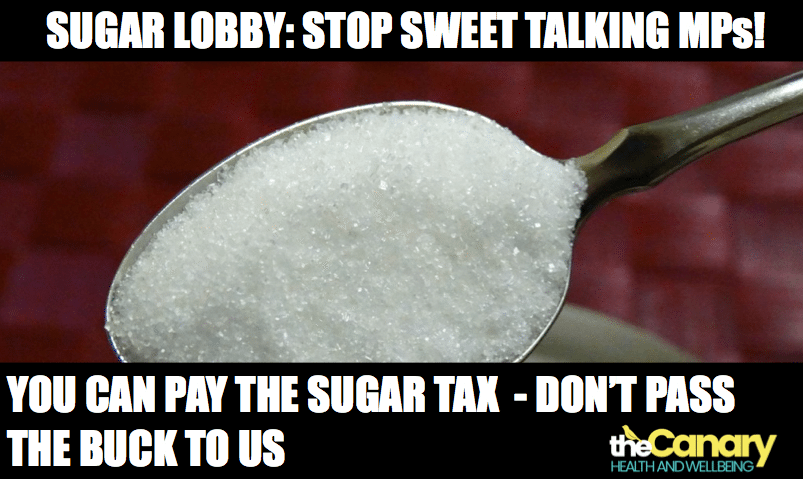 Jeremy Hunt is in the spotlight again for refusing to publish a review of the evidence on what measures could help to reduce the UK’s sugar consumption.  The review includes a proposed tax on sugary drinks –  a major improvement on the toothless ‘voluntary responsibility’ agreement that companies sign currently up to, in which businesses claim work on making their products more healthy. Faced by food lobbyists reportedly using ‘Big Tobaccco tactics’ to fight any regulation, Hunt faces a dilemma.

The question however is not whether taxation should happen (it definitely should), but instead how it should be taxed.

Parliamentary advisers have claimed the studies suggest a tax of 20p per litre on sugar-sweetened beverages. This figure is also recommended by Malcolm Clark, spokesperson for the Children’s Food Campaign. This measure (sources say) could prevent 180,000 cases of obesity in the UK and raise between £300m and £1bn of revenue.

Some experts suggest even higher tax rates. In July this year, the British Medical Association published a study on the state of healthy eating, which says:

“The use of taxation measures on unhealthy food and drink products has consistently been found to have the potential to improve health, with relatively high taxation levels (in the region of 20 per cent) needed to achieve positive health outcomes.”

But ultimately, what we’d like to see in this report is more information on exactly how this tax will be levied. Some food manufacturers use sugar as a cheap ‘filler’ or flavour enhancer, instead of using quality ingredients. As such the tax needs to be levied on the company as a penalty for taking these cost cutting measures. Safeguards need to be added so that these businesses don’t just pass on additional costs to the consumer.  The focus needs to be on encouraging the food lobby to increase the quality of the ingredients in the products their customers are currently buying. Otherwise all that will be created is a new tax on poverty.

When sugary food becomes more expensive, those who have neither time nor the money to eat healthy who suffer. If you’re working two jobs and have a limited time window to feed children, looking for new healthy products is often a stretch too far. Especially because healthy food is often more expensive. A report by the London School of Economics explains that:

“Individuals on low incomes are less likely to consume wholemeal bread and vegetables, but are more likely to consume fat spreads and oils, non-diet soft drinks, pizza, processed meats, and table sugar…There is no escaping the fact that poor dietary health, like poor health in general, is more prevalent against the poor.”

That same report makes it clear that that food taxes tend to do the opposite of what taxes are supposed to do, and are ineffective when there are no additional safeguards protecting the public from inflated prices:

“Taxes are supposed to transfer wealth from the rich to the poor. Food represents a declining proportion of household expenditure as incomes increase. As a result the burden of any tax on food falls disproportionately on the poor, who spend a much greater percentage of their household budgets on food. This is why food is VAT exempt. When the tax is increasingly targeted on foods which are unhealthy, things get worse: unhealthy food consumption is concentrated in low income households.”

These taxes, if not properly observed could also attack those who legitimately rely on sugary drinks for health reasons, such as type 1 diabetes patients. To avoid hypoglycemia, sugary drinks are a cheap, fast-acting way to raise blood glucose levels.

So what’s the answer? Healthier food has to be made much cheaper and easier to access. Processed food needs to be made less damaging and restrictions placed on marketing them – especially to children. We need to place controls on sugar’s producers, not its consumers. Trying to impose the tax as a means to force the public to make alternative choices won’t work, it’ll just drive more people to the food banks.