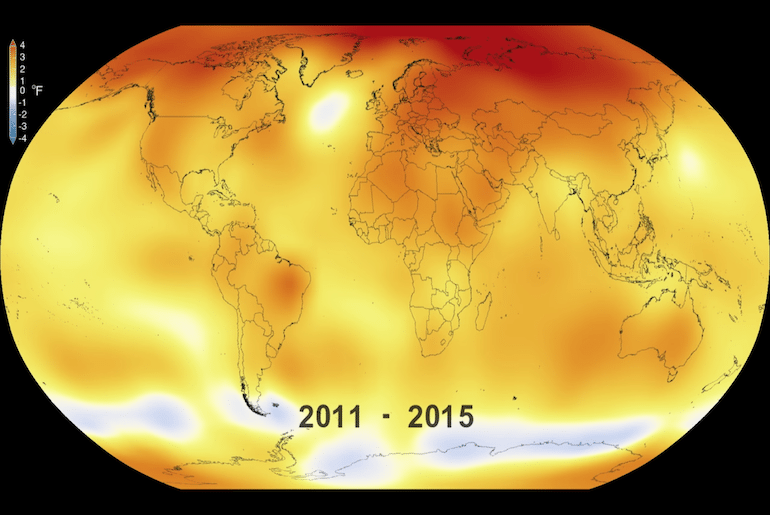 2015’s average global temperature was the highest since records began in 1850, according to new figures released by the Met Office, and NASA and the National Oceanic and Atmospheric Administration (NOAA).

In December, world leaders committed to curbing the global rise at a maximum of 2C (and ideally 1.5C). But they’ll have to do more than sign an agreement to slow down the temperature rise. NASA Administrator Charles Bolden said the new global temperature data:

should make policy makers stand up and take notice – now is the time to act on climate.

The average surface temperature of the planet has risen by around 1C (1.8F) since the late 19th century, mainly due to an increase in greenhouse gas emissions caused by human activity.

2015’s average temperature shattered the previous record set in 2014 by 0.13C (0.23F). That might not sound like much, but it’s the biggest increase we’ve ever seen in a year and it sits at the top end of the Met Office’s estimate.

Experts believe the year’s particularly dramatic rise could be in part down to the El Niño system, marked by warm waters in the Pacific Ocean. Prof Katharine Hayhoe, director of the climate science centre at Texas Tech University told the BBC:

The reason that 2015 has not just broken the record but has blown past it is because we are seeing a long-term temperature trend interact with the strongest El Niño of our generation. What we have this year is the long-term rate of change with an extra spike of El Niño on top.

It’s not just temperatures that caught our attention last year: droughts and floods dominated the weather news, causing devastation in countries like India and the UK, where we had “both the wettest and the warmest December in our records going back to 1910, but also globally,” according to Dr Peter Stott from the UK Met Office Hadley Centre.

So what’s in store for 2016? More of the same, according to meteorologists. As Gavin Schmidt, director of NASA’s Goddard Institute for Space Studies explained to Nature:

2015’s record temperature might have been an unusually big increase, but scientists say it’s not a surprise; unless something drastic changes, we’ll continue to see the temperature climb. Whether the agreement made in Paris in December will make a difference remains to be seen, but in the meantime, there are a few things we can all do to help stop the rise.