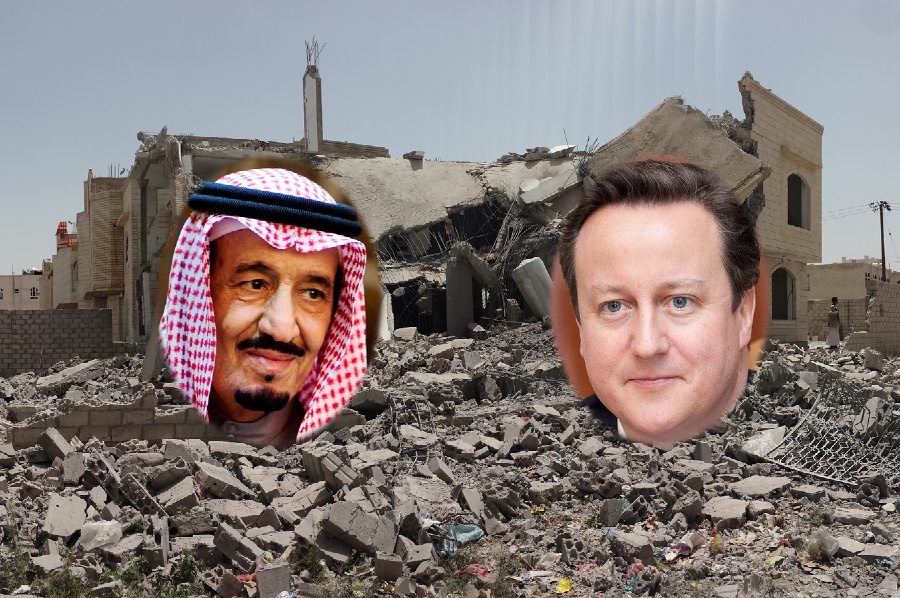 Have you heard the one about the government calling its opponents terrorist sympathisers, while it helps its allies to spread terror around the world? Well, this dark humour is definitely not funny, but it’s probably the only kind we’re going to get from the current Conservative government. While its media allies seek to portray it as the saviour of humanity, there is clear evidence of British support for Saudi war crimes in Yemen.

Why is Saudi Arabia suddenly in the news so much?

The kingdom of Saudi Arabia, whose biggest mass execution for decades at the start of 2016 was met with near silence by the British government, is no stranger to human rights violations. But why has it been appearing in the news more and more often in recent months?

First of all, the state ideology of Saudi Arabia – Wahhabism – is the driving force behind the Daesh (Isis/Isil) insurgency in Syria and Iraq. And according to one senior Qatari official, Daesh actually began as “a Saudi project” to weaken Iranian influence in both Syria and Iraq.

But, arguably, it has been Saudi Arabia’s involvement in the civil war in Yemen that has drawn the most media attention in the last year. After months of killing Yemeni civilians and destroying hospitals, schools, and refugee camps, the Saudis have all the evidence stacked against them. And continued British support for Saudi war crimes in Yemen has attracted particular criticism from human rights organisations.

The irony of Cameron and other Western politicians talking about fighting terrorism, while propping up the likes of Saudi Arabia – which the Canary has referred to as Daesh with an embassy – has not been lost on those following the war in Yemen.

Saudi atrocities in Yemen in the spotlight

In September 2015, the Guardian described how the air campaign in Yemen – launched by a Saudi-led coalition of Arab states in March 2015 – was aimed at defeating Iranian-backed Houthi militias who had overthrown Yemeni president Abdu Mansour Hadi in 2014. The paper explained how the airstrikes had been “dismally indifferent to the plight of civilians” and had regularly seen “indiscriminate targeting of populated areas”. The United Nations claimed that, as a result, around 80% of Yemeni citizens are “on the brink of famine”.

With Yemen’s security vacuum opening up more and more space for Wahhabi groups like al-Qaida, the Guardian stressed that a negotiated settlement was long overdue, but would only come about as a result of strong international pressure being placed on the authoritarian regime in Saudi Arabia. The western complacency and silence regarding the war crimes and atrocities being perpetrated in Yemen, it said, would “only bring more chaos and strife”.

But according to Oxfam’s deputy chief executive Penny Lawrence, the reality in Yemen was even worse, with the British government actually:

And that flies in the face, Lawrence insisted, of the British government’s claim that it has “one of the most rigorous… export control regimes in the world”.

If British elites were genuinely worried about how their weapons are used, however, there would be a much stronger reaction to the allegations that around 3,000 civilians have been killed in the Saudi-led bombing campaign – including as many as 10 children a day, according to Unicef.

In the absence of firm action from the Conservative government, says Save the Children’s Yemen director Edward Santiago, we are left with the very distinct impression that:

The British government’s collaboration with the carnage

Although New Labour did not shy away from arms sales to Saudi Arabia (approving around £1.7bn-worth of transactions in 2009 alone), David Cameron’s government has licensed almost £7bn of arms sales to Riyadh since coming to power in 2010, according to figures from Campaign Against Arms Trade (CAAT).

And these figures have not fallen since the start of the Saudi-led assault on Yemen. In fact, government statistics released this month show that between July and September in 2015, Britain sold Saudi Arabia over £1bn-worth of bombs. BuzzFeed notes that this was “more than a hundredfold increase on the previous three-month period”. And documents seen by the Observer showed that this was not just a coincidence, revealing that the government had identified Saudi Arabia as a “priority market” and encouraged UK businesses to step up their bids for lucrative Saudi contracts.

In other words, rather than exercising caution over the Saudi slaughter of Yemeni civilians, the Conservative regime has actually stepped up its efforts to fuel the carnage. According to CAAT spokesperson Andrew Smith, this shows that:

So, there is definitive proof that UK-made arms have been used to destroy civilian targets during the Saudi-led campaign in Yemen. And we know that, if anything, Britain’s arms sales to Saudi Arabia have increased in the last few months. In other words, there is tacit British support for Saudi war crimes in Yemen.

But apart from fuelling the civil war, UK arms sales have also broken laws both domestically and internationally. This is according to Amnesty International and other human rights groups. In fact, CAAT has even prepared a legal case against the Conservative government in relation to the matter.

On 9 January, the Guardian referred to a legal ultimatum that CAAT’s lawyers sent to the government. If licences allowing military equipment to be exported to Saudi Arabia were not suspended within 14 days, it read, legal proceedings would begin and the government would be forced to explain what it had done to ensure British arms were not being used in breach of international law.

The particular article in the EU Council Common Position on arms sales referred to by the lawyers insists that countries must “exercise special caution and vigilance in issuing licences” to states where “serious violations of human rights have been established”.

Andrew Smith elaborates on why the Conservative government has violated this article:

UK weapons have been central to a bombing campaign that has killed thousands of people, destroyed vital infrastructure and inflamed tensions in the region… The UK has been complicit in the destruction by continuing to support airstrikes and provide arms, despite strong and increasing evidence that war crimes are being committed

To make matters worse, British and US military officials have even been present in the command centre for the Saudi-led airstrikes, and have seen the list of targets. Again, clear evidence of British support for Saudi war crimes in Yemen.

David Cameron is now starting to feel the pressure over British arms sales to Saudi Arabia. And rightly so. The fierce conflict in Yemen has now been going on for many months, and it seems very far from ending. But while human rights groups are trying to hold the Conservatives to account for their involvement in the war, there is so much more that needs to be done. That’s why we must keep up the pressure.

Write to David Cameron to ask why there is so much British support for Saudi war crimes in Yemen.

Demand our MPs take a stand on the issue.

Support the Canary so we can keep holding the government to account for its actions.