This police officer was sentenced to 263 years in prison, he got off lightly (TWEETS, VIDEO) - Canary 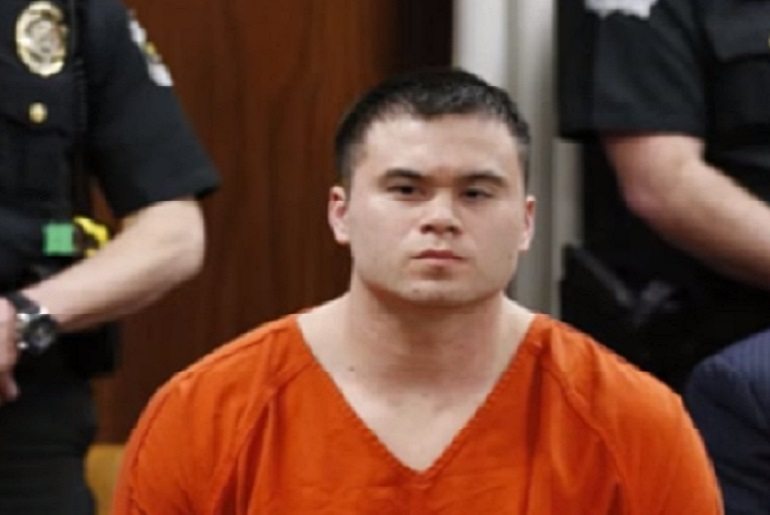 Convicted rapist Daniel Holtzclaw was sentenced on 21 January for his crimes against 13 black women. He committed vile sexual assaults while on duty as an Oklahoma City police officer. He singled out black women, checked if they had criminal records by running their names through police databases, and threatened them with jail unless they complied with his increasingly twisted demands. The women were demeaned during his trial for not being ‘perfect victims‘. Their status and sometimes tragic personal histories were used against them again and again.

As a member of the police department, Officer Holtzclaw saw himself as an unassailable. He was a ‘perfect perpetrator’. Then he made the mistake of stopping Janie Liggons. She was only passing through the neighbourhood and after her assault, went home, gathered her family and reported him.

Shockingly, Holtzclaw was not without his supporters, and his team did everything they could to portray him as an innocent preyed up on by unscrupulous liars. They even dredged Facebook for grounds for a mistrial. His legal team challenged the hearing that found him guilty in December 2015, saying that the  DNA evidence mentioned in the tweet below never made it to Holtzclaw’s defence team. The counternarrative wasn’t enough to convince the judges.

Once the Oklahoma Police Department became suspicious of Officer Holtzclaw, they checked his database queries and GPS records. Victim testimonies were corroborated by Holtzclaw’s own log sheets.

Investigators say there were likely more victims in #Holtzclaw case than those who came forward. More next on @ajam. pic.twitter.com/GuGnUnq2g9

After the trial, jurors recommended that the predatory officer serve his terms consecutively. No one knew how the circuit judge would rule.

According to the Associated Press, attorney Benjamin Crump said:

Every one of these women, from the 17-year-old teenager to the 57-year-old grandmother … survived a horrific experience.

Crump further heralded the ruling as a “landmark victory”.

Despite being largely ignored by the media when it first came to light, many hope that Holtzclaw’s victims will not have suffered in vain. These women were canaries in the coal mine of police brutality. Abuses of power by police are on the rise. Departments have yet to catch up with the increasing frequency of these crimes against women. Many US police departments have no policies for dealing with sexual offences by officers. Surely, that must change now.

Holtzclaw’s sentence breaks down as follows.

These are the charges that delivered guilty verdicts. Just as many again were not substantial enough for a conviction. Who knows how many women did not want to re-live their awful experiences with Holtzclaw by testifying at his trial.

This is the stare down I was talking about earlier, #holtzclaw glaring at victims as they read the impact statements pic.twitter.com/QCUnPLGphJ

With 263 years to go, perhaps Holtzclaw will live long enough to face himself.