Obama is worried about Zika, should we be too? - Canary 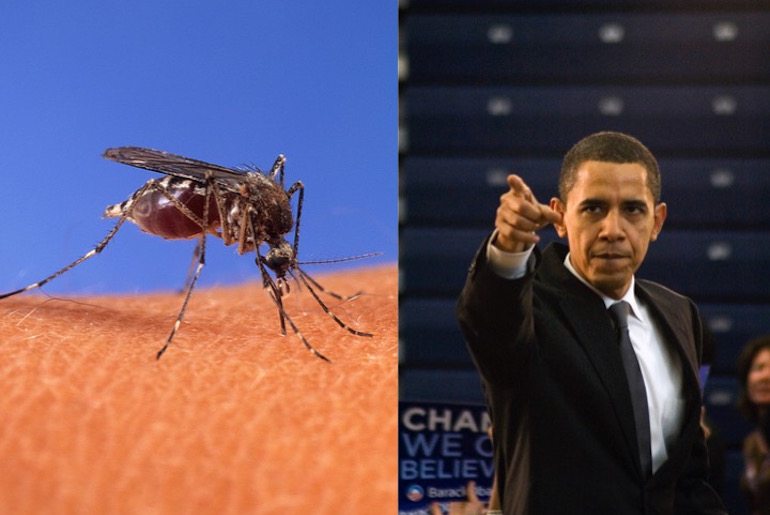 This week, President Obama called for “urgent action” against Zika virus, which is now spreading in 21 countries in the Caribbean, North America and South America.

Zika virus is transmitted via Aedes aegypti mosquitos, which live in warmer regions. It causes mild symptoms in only one in five people. However, infection during pregnancy has been linked to babies being born with microcephaly – small heads and brains – with almost 4,000 cases being reported in Brazil since October, a huge increase from the average of 160 cases.

Experts believe there is a risk the mosquitos – and the virus – will spread further as summer approaches, including to highly populated areas in the US. In a statement, the White House said:

The president emphasised the need to accelerate research efforts to make available better diagnostic tests, to develop vaccines and therapeutics, and to ensure that all Americans have information about the Zika virus.

Dr Francis Collins from the US National Institutes of Health warned the virus could spread to parts of the US in which 60% of the country’s population lives. In a recent blog post he talked about research published in The Lancet:

According to the researchers’ calculations, about 200 million Americans—more than 60 percent of the population—reside in areas of the United States that might be conducive to the spread of Zika virus during warmer months through biting mosquitoes, including areas along the East and West Coasts and much of the Midwest.

The wave of Zika-related microcephaly cases is already devastating thousands of families in Latin America. In Salvador, Brazil, Mila Mendonça and Rodrigo Gomes found out their baby had microcephaly when Mila was six months pregnant. She knew she had contracted the virus, but at the time it wasn’t something to be concerned about, as she explained to BBC News:

I had zika, but like everyone else I didn’t give it any thought. It felt like a flu, or not even… At the time, I told my obstetrician, but she didn’t even write it down.

Getting the diagnosis was a shock, and continues to have a big impact on the family. Mila said:

The day I found out, on August the 11th, was the worst day of my life. It was horrible. We didn’t know anything about it. It was just bad news. I cried myself to sleep. I was exhausted from crying… Gabriel was born on December the 4th and his microcephaly was immediately confirmed… He has to see many doctors, almost daily, and gets a bit tired and stressed.

Gabriel’s case is not unusual – although Zika virus has not yet been proven to be the cause of microcephaly in babies, the spread of disease coincides with the increase in microcephaly cases. Experts are suggesting that pregnant women should avoid affected areas, and even that women in those areas who are planning to have a baby should consider not getting pregnant for the next two years. Dr Collins advised:

With no vaccine or treatment currently available to prevent or treat Zika infection, the best way for individuals—and pregnant women in particular—to protect themselves is to avoid traveling to places where Zika is known to be spreading.

Here’s what you need to know about the virus, and how you can avoid infection.