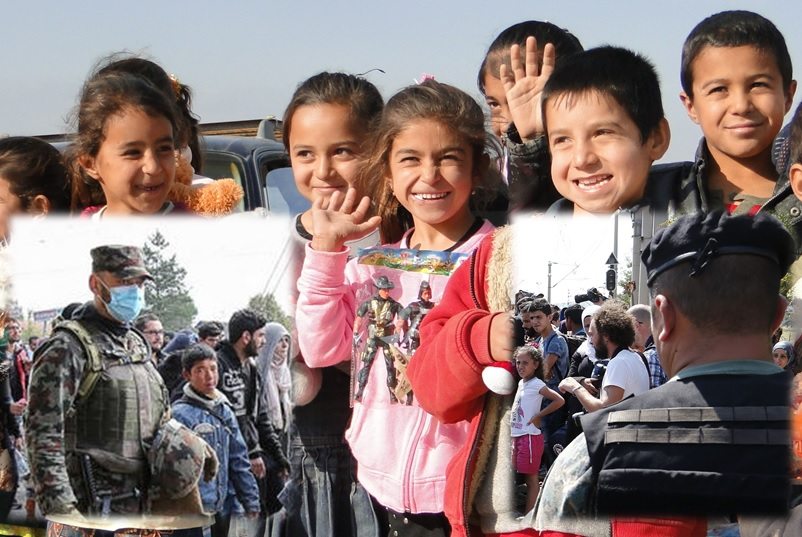 What kind of a welcome should Europeans give to refugees who’ve fled from death and destruction? After unimaginably long and treacherous journeys, one might think a smile would be a good place to start. We could even meet and support those seeking asylum while fighting against hateful anti-migration myths – as Labour leader Jeremy Corbyn has done recently. Or alternatively, we could confiscate migrants’ money and possessions – as the current Danish government plans to do.

An act of solidarity

Corbyn visited two refugee camps in northern France on 23 January to “understand the nature of the refugee crisis” and “reach out to fellow human beings”. Making a powerful statement of both empathy and solidarity on what was his first official journey abroad as Labour leader, he has been praised for undermining the racist demonisation of migrants in the right-wing media by drawing attention to the disgraceful conditions in the Calais and Grande-Synthe camps.

Although 73% of Brits apparently oppose taking refugees from the French camps, the New Statesman’s Liam Young reminds us that “migrants establish one in seven British businesses” and “have contributed more in taxes to the Treasury than they have taken in benefits”. In other words, there is good reason to think people’s fears are based largely on scaremongering by politicians and corporate media outlets.

But by bringing rare publicity to the camps and calling for action to be taken – both to stop global conflicts and show compassion to their victims – Young asserts that Corbyn:

is not bending to the will of misinformation or political spin.

Instead, he is taking a stand to address misconceptions.

This in a political environment where prime minister David Cameron think it’s ok to dehumanise refugees by referring to them as “a bunch of migrants”.

A shameful assault on refugees

The current government in Denmark has gone even further than Cameron, transforming anti-migrant rhetoric into action.

The right-wing Liberal party, which has ruled Denmark for around 10 of the last 15 years, passed a law on 26 January which will allow authorities to take any money and valuable possessions worth over £1,000 away from refugees. (Switzerland and southern states in Germany have already opted for similar laws.) The argument is that the excess money raised will be put towards paying for their stay. But critics argue that the measure is an attack on the “human dignity” of refugees.

While further feeding into the myth that refugees are scroungers, this new measure adds to other anti-immigration steps taken by the current government and its allies, like:

The most heavily criticised element of the new law, however, is the requirement for successful refugees to wait three years (instead of one) before they can apply for family members to be reunited with them in Denmark. Jonas Christoffersen from the Danish Institute for Human Rights strongly condemns this change, saying:

The right of refugees to be reunited with their family is protected by numerous international conventions… We believe the government is overstepping international law by implementing this bill.

Amnesty International’s John Dalhuisen, meanwhile, claims the measure is “plain wrong” because it will “prolong the suffering of vulnerable people who have been ripped apart from their families by conflict or persecution”. And such a “dismal race to the bottom” regarding the treatment of refugees, he stresses, is a worrying attack on both the rights and dignity of refugees.

Some citizens worry that their welfare state, which gives them free health care and education, will be put under increased pressure if migration to Denmark continues. In 2015, for example, around 21,000 people claimed asylum in the country. But in the current attempt to “solidify Denmark’s reputation as Western Europe’s least attractive country for refugees”, says Edward Delman at the Atlantic, the previous Danish record of humanitarianism is rapidly disappearing. In the words of Danish art collector Jens Faurschou, the Danish government has chosen to be at “the forefront of symbolic and inhuman politics” instead of leading the search for a real solution to the refugee crisis.

The roles of the UK and Europe in fuelling migration

Jeremy Corbyn’s visit to French refugee camps came just a day after the country’s prime minister Manuel Valls claimed (at 2016’s meeting of business and political elites at the Swiss ski resort of Davos) that refugees were destabilising Europe. Not internationally-funded armed conflicts. Not systemic and globalised economic exploitation. Not Europe’s insistence on propping up repressive regimes abroad out of self-interest. Refugees.

Just let that sink in for a few seconds.

No wonder Charles B. Anthony at Middle East Eye calls the Labour leader’s visit a “masterclass” in solidarity and humanity. As the rich, powerful, and bigoted use immigrants as scapegoats to distract us from more pressing issues like fair wages, dignified living standards, and a brighter future, Corbyn aims to keep our eyes focussed on precisely these issues.

Yes, immigration is a worry for many people in Britain and across Europe, but primarily because we have been misinformed and confused. Are migrants really the cause of all our social ills? Will dehumanising them and treating them like criminals really change anything? Or are we pointlessly focussing our energies on the victims rather than the aggressors?

Refugees didn’t create their own perilous condition and migrants seldom contribute to a global economic inequality that forces them to migrate. Many refugees… have fled wars that we in the West have either indirectly supported or directly created. They’re certainly not dismantling the NHS or closing down your local library.

So the next time so-called moderates in parliament talk about launching a “suicide bomb mission” to defeat Corbyn, let’s ask ourselves who the real extremists are. And the next time a politician or media outlet portrays refugees as a destabilising force, let’s ask who is really doing all the destabilising.