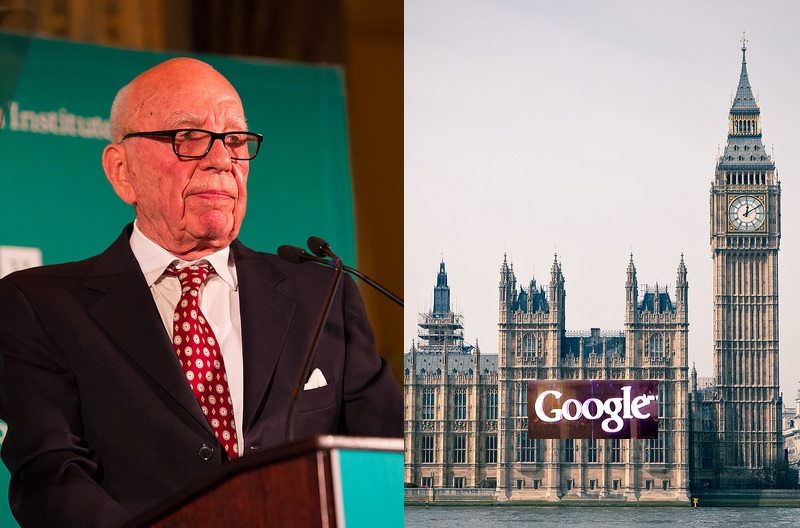 Rupert Murdoch has caused a stir on Twitter, after responding to the Google tax deal announced earlier this week. The media magnate expressed his opinion of the arrangement, which effectively means Google will have paid a mere 3 per cent in tax on their earnings over the last decade, in a series of tweets on Wednesday.

On the surface, Murdoch appears to condemn the ‘sweetheart’ deal, blaming tax laws, tax havens, and Google’s cosy relationship with governments for the astonishingly low rate of tax. But, as always with this wily tabloid tsar, when his arguments are broken down, a very different view emerges.

Murdoch identified what he sees as a major factor in the tax decision:

Google has cleverly planted dozens of their people in White House, Downing St, other governments.
Most brilliant new lobbying effort yet.

These statements, coming from Murdoch, attracted some reaction:

@rupertmurdoch you are literally batshit crazy.

In light of Murdoch’s own history, such incredulous reactions are unsurprising, as others pointed out:

@rupertmurdoch Unlike you sir, who planted Andy Coulson through the front door of No.10 & gave yourself & Rebekah unlimited back door access

Murdoch’s habit of cosying up to politicians is well known. His close relationship with the current Conservative government in the UK is a case in point. They party together, they have regular off-the-record meetings, some of which suspiciously happen at moments with immense political poignancy – such as on the weekend Jeremy Corbyn became leader.

Another dazzling hypocrisy in his criticism here is his own company’s record on tax evasion. As The Economist detailed in 1999, over the previous 11 years Murdoch’s Newscorp Investments had made £1.4 billion in profits – yet  paid no corporation tax at all. This is largely due to, as Bloomsberg Business alleges, Murdoch’s company having 23 tax haven subsidiaries, which allow profits made in the UK to be transfered to countries where tax rates are extremely low. But despite indulging in this practice himself, Murdoch condemns Google for doing the same:

Faced with such blatant duplicity, Twitter users tried to get to the bottom of Murdoch’s motivation:

Whilst Murdoch is likely aware of the irony of his statements, it is certainly jealousy that comes closer to the mark. This is obvious in the language he uses. He identifies the “brilliant” move Google has made, in “cleverly” planting lobbyists in governments. Does that sound like criticism? No, despite his standard slippery narrative, it sounds like he’s congratulating Google.

And if anyone knows the benefits of having influence in politics, it’s Murdoch. In 2011, his enterprise came within a hair’s breadth of securing control of BSkyB, because of its cosy relationship with the then culture secretary, Jeremy Hunt. The takeover plan was only thwarted by the phone hacking revelations that exploded that same year. Despite the BSkyB bid being dropped, and News of the World folding, very little has been done to chastise Murdoch for the despicable practice, under his leadership.

However, there are fresh phone hacking allegations on the horizon, for Murdoch’s Sun newspaper, so he may get his day of judgement yet.

Regardless of Murdoch’s intentions in this latest twitter outburst, he has succeeded in drawing our attention to the corruption that takes place when governments get close to corporations. We should heed this warning, and do all we can to sever the links between politicians and big business. Google should be shown the parliamentary door, and Murdoch should be booted out with it.

Sign this petition to demand that all corporations pay their tax.

Write to your MP to express your views on corporate tax responsibility.