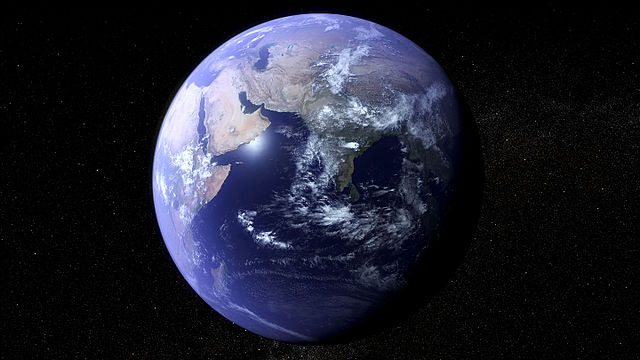 Women only account for 11% of all astronauts, regardless of the fact that they are actually overall better built for space than men are. Before the launch into space of the first female American astronaut in 1983, journalists asked Sally Ride if she would wear makeup in space, if her reproductive organs would be damaged or if she wanted children. To what she replied, “It’s too bad this is such a big deal. It’s too bad our society isn’t further along.” But now that our society is (hopefully) further along, an ancient question is still being asked : “What happens when women menstruate in space?” According to science, not enough to make such a huge fuss about it.

Women have the advantage in space

The human body goes through a lot of changes when in space. Not having gravity to constantly work against, it loses bone density and muscle mass. The cardiovascular system gets lazy and the body’s balance control mechanisms have to completely readapt to find a new norm. But there is a sex bias for the adaptation to space.

Women are more comfortable in space, according to science. A big part of it depends on how males and females differ physiologically. Research has shown that women can have stronger hearts, which means they could potentially handle low oxygen and low gravity environments better than their male counterparts. And experiments have shown that their bodies are also better equipped to withstand the vibrations they’ll face when space-travelling.

But there are also disadvantages in being a woman in space. According to physiological models used by NASA, female astronauts have a lower threshold for space radiation than their male counterparts, meaning opportunities for extravehicular activity are more limited for them. In fact, the risk of a female astronaut developing cancer nearly doubles the risk of males.

Women also seem to be psychologically fitter to handle space adventures. Research has shown that women might actually deal better with the isolation and lack of sensory input that comes from a long duration of interplanetary travel.

But, probably the most important factor, especially for the people sending humans up in space is money. Women astronauts are more economical. Women are on average lighter, and the Mars simulation that has been running in Hawaii has found that they expend less than half the calories than their male peers. This means you only have to stock half as much food and resources for women, meaning the spacecraft could be lighter and consume less fuel.

So why are we still looking at female discrimination in outer space. Probably because issues such as menstruating in space are still newsworthy.

Menstruating in space – the timeless question

Fifty years ago, NASA dealt with the issue of menstruation in space by avoiding it all together. Clearly, little was known about sending a menstruating person to space. In fact, periods delayed American women from entering space programs because scientists thought it would be bad for their health, or bad for the program.

In 1964, a paper warned of the dangers of putting “a temperamental psychophysiologic human” also known as “a woman on her period” in charge of a “complicated machine”. Others cautioned that zero gravity might induce retrograde menstruation, when blood flows backward up the fallopian tubes and into the abdomen.

Doctors didn’t have evidence for any of these claims, but they still helped shutting down the Lovelace Women in Space Program in the early 60s. This up-to-date program was already suggesting sending women in space as it was more practical from an engineering standpoint due to their lower body weights and oxygen requirements. Unfortunately, no American woman would journey into space until Ride’s flight two decades later.

Engineers once asked Sally Ride if 100 tampons were enough for a week-long stint in space, she recalled in a 2002 interview. “No, that would not be the right number,” was her straight-faced reply. It turns out Ride’s period posed no problems. Studies later confirmed that women can have periods as normally in space as they do on Earth. Menstrual blood flow isn’t actually affected by the weightlessness experienced in space, and it doesn’t just float back in – the body knows it needs to get rid of it. There is even some evidence that floating in microgravity can actually reduce some of the cramping associated with menstruating. That said, having your period is a pain, in space or not.

But the ‘menstruation’ question is still up to date since scientists are still discussing the different options female astronauts have in space regarding their extra-terrestrial periods.

In a new study published in the journal npj Microgravity, space gynecologist Dr. Varsha Jain and space pharmacologist Dr. Virginia Wotring (please take some time to appreciate that these jobs exist! ) call for more analysis on how to help menstruating people in space stop their period.

It’s common for menstruating astronauts to choose to suppress their periods on long missions. It cuts down on waste and the challenges of changing a tampon in zero-gravity. On shorter missions, astronauts adjust the time of their periods around the flight.

How exactly to stop periods is what’s in question here. According to the study, the birth control shot is out because it can cause loss in bone density that can be exacerbated by space flight. Some pills don’t always induce a full bleeding stop and can be too bulky to pack for long-term space trips.

The authors believe the best options are certain kinds of birth control pills, the implant, and IUDs. The only problem is that there haven’t really been studies on how these act in space and withstand the change in environment. There are still practicality issues: for a three-year mission (say, to Mars and back), you’d need about 1,100 pills to keep periods away – and the flight needs to cope with carrying and disposing of all the packaging. The same problem applies to sanitary products.

More work needs to be done on periods in space but apparently ‘menstruation problems’ seem to be about the same on land and among the stars. Moreover, the place of women in space has evolved quite a bit. For the first time in history, in 2013, NASA boasted about its first ever gender-equal training class of astronauts. And, with the evidence supporting female astronauts, the first human on Mars might just be a menstruating female!