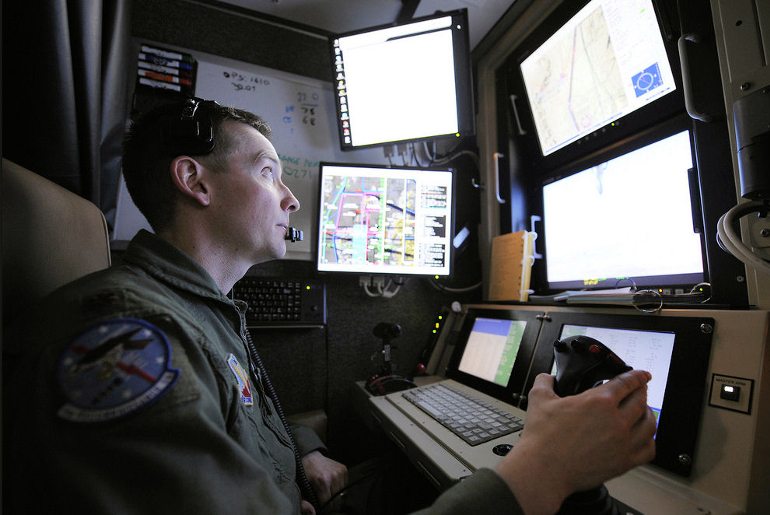 Military scientists have enhanced the mental abilities of air force personnel using electric shocks to the brain. The research aims to increase the performance of military drone pilots and air crews during missions.

The study took place at the Wright Patterson Air Force Base in Ohio. Researchers zapped the brains of 20 airbase personnel using a technique called transcranial direct current stimulation (tDCS). Five electrodes attached to the scalp passed small electric currents through the skull and into specific parts of the brain. The trial results demonstrated that tDCS significantly improves multitasking skills. Those receiving it were also less prone to drops in performance from information overload.

Drone operators and air crews have to make life or death decisions. So optimum mental performance is critical to reducing civilian deaths during military operations. Previously, stimulant drugs like modafinil and amphetamines have been used to enhance and extend the performance of air service personnel. The United States Air Force (USAF) hopes tDCS will be a safer alternative to drug use by pilots. Amphetamine use was implicated in a deadly ‘friendly fire’ incident by a US pilot in Afghanistan.

Scientists at the Wright Patterson Air Force base have carried out many studies on drone pilot stress. One in 2011 concluded that around half of them had ‘high operational stress’. In the tDCS study, the authors state how a pilot’s abilities begin to fail on operations:

Within the air force, various operations such as remotely piloted and manned aircraft operations require a human operator to monitor and respond to multiple events simultaneously over a long period of time. However with the monotonous nature of these tasks, the operator’s performance may decline shortly after their work shift commences.

The study involved the participants taking a multi attribute task battery (MATB), a test NASA developed to evaluate multitasking skills. The MATB, carried out on a computer screen, requires keeping a cross hair inside a moving circle while simultaneously watching and reacting to three other tasks.

The MATB results showed that the group receiving tDCS started to outperform the control group just four minutes into the test. The authors of the study write:

The findings provide new evidence that tDCS has the ability to augment and enhance multitasking capability in a human operator,

For the US War on Terror to continue, the air force needs to get the most from its drone pilots, as they are losing them faster than they can be replaced. In one 12-month period 180 drone pilots graduated from the USAF training program, yet 240 pilots quit.

General Herbert Carlisle commented on the manpower crisis, saying he was “extremely concerned” and the drone force was at “breaking point”. Deborah Lee James, Secretary of the Air Force, shared Carlisle’s concerns and told a press conference:

The exodus of Drone pilots could be due to overwork. They log 900 to 1,800 hours a year compared to 300 hours annually for a typical Air Force Pilot. Or it could be the increased exposure to psychological stress caused by the drone’s mode of operation. Drones often circle and observe targets before they attack, receiving far more information on their human targets than a fast moving jet-fighter pilot would. After the attack the drone’s advanced sensory systems allow the operator to see the devastating affect of its lethal attacks:

How many women and children have you seen incinerated by a Hellfire missile? How many men have you seen crawl across a field, trying to make it to the nearest compound for help while bleeding out from severed legs?

This is how Helen Linebaugh, a former drone imagery analyst, described the horrors she experienced.

The study only observed the effects tDCS had on the multitasking abilities of the participants. But some scientists are worried tDCS could have unobserved negative consequences.

Roi Cohen Kadosh, a scientist from Oxford, carried out a tDCS study in 2014. The results showed that while some people experienced enhanced mental abilities, others had a decrease in function. Kadosh also advised people not to experiment with tDCS at home due to its unknown effects.

Deputy Director of the Oxford Centre for Neuroethics, Neil Levy, is concerned about the ethical considerations raised by the use of tDCS. Levy was worried about the possibility of a lack of informed consent if tDCS was used in the military, saying:

Even for those jobs where attention is absolutely critical, you want to be very careful about making it compulsory, or there being a strong social pressure to use it, before we are really sure about its long-term safety.

The studies of the Wright Patterson Air Base scientists into drone pilot operations may soon become irrelevant. Plans are under way to replace the weak human pilot link in military drones with autonomous drones controlled by artificial intelligence algorithms. These robotic killing machines will be able to fly missions non-stop, only returning to base for refuelling and rearming. The autonomous drones will not suffer from burnout – they will feel no stress or sorrow when they decide to pull the trigger.

– Keep up with The Canary’s coverage of Science and Technology and Health by liking our dedicated Facebook page. – Read more articles from The Canary on Drones.
– Support The Canary if you appreciate the work we do.
– Read more about the use of military drones at Drone Wars UK.