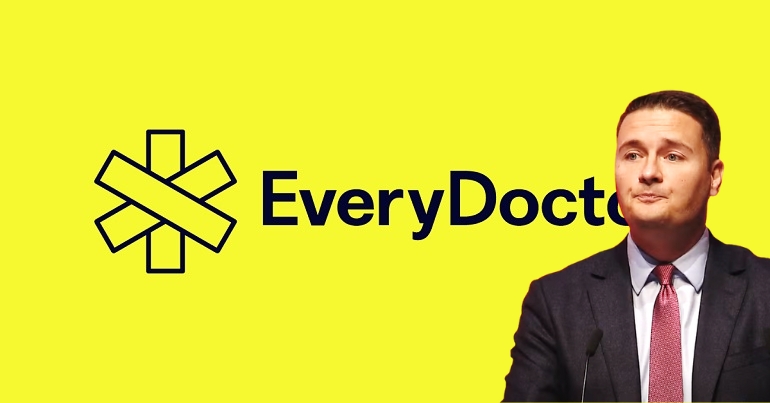 Labour’s shadow health secretary Wes Streeting has caused uproar among medical professionals. He laid out his plans for NHS GPs in an interview with right-wing newspaper the Times on 7 January. So the Canary spoke to a frontline GP who responded to many of Streeting’s claims and ideas. They were, at best, unimpressed – and at worst ‘deeply sad’, ‘fearful’ and felt like the Labour frontbencher had delivered a “kick in the teeth” to GPs.

Streeting has some interesting plans if the public elect the Labour Party in 2024 and he becomes health secretary. Right-wing newspaper the Times published an interview with him on Saturday 7 January. As the Canary previously reported, his proposals have left many people angry and disdainful. So, we reached out to a frontline group to get its reaction.

The Canary spoke to a grassroots NHS GP and media spokesperson for campaign group EveryDoctor UK. You can find out more about the group here. We’re keeping the GP’s identity anonymous at the request of the group, due to the amount of abuse, on- and offline, medical professionals currently receive. The GP told us:

‘Disappointing’, was my first thought on reading the article in the Times by Streeting. Then, as his words sunk in that turned to deep sadness, and fear.

It starts off well with an interesting anecdote, but then descends into inaccuracy, ignorance and incitement. It has already been shown that what is currently overwhelming A&Es across the country is not difficulty in accessing a GP, yet Streeting repeats this claim here anyway. He also notes that seeing a GP costs a tenth of an A&E appointment. Unsurprising, given the investigations that patients attending A&E usually need. So although he implies it, it is clear that GPs cannot deal with most of the patients attending A&E. It is like comparing apples and oranges.

The GP then went on to address some of Streeting’s main points.

As the Canary previously reported, Streeting wants the NHS to let patients self-refer to specialists. He said:

Sometimes it’s pretty obvious that you don’t need to see the [family] doctor. I had a lump on the back of my head, during the pandemic. I needed to see a dermatologist but in order to get an appointment with a dermatologist, I had to go through the GP. What a waste of my GP’s time. I think there are some services where you ought to be able to self refer.

However, the GP the Canary spoke to vehemently disagreed with Streeting’s assertion. They said:

Where the article really starts to alarm is where Streeting asserts that “GPs should no longer be the sole gatekeeper to the NHS”: a statement followed with the suggestion that patients should self-refer to specialists. Many of my hospital colleagues are aghast at the suggestion.

An enormous part of what GPs do is risk management: taking symptoms, making diagnoses, calculating the risks of it being cancer or something else needing urgent treatment. Take bloating for example. Is this IBS, bowel cancer, helicobacter pylori infection, ovarian cancer etc? Which specialist do you need? How quickly? This is core to what we do. Allowing anyone to self refer means that hospital consultants will waste an enormous amount of time on patients they should never have seen, and patients may come to harm through delay. We already have long waiting lists, how much longer would they be under this scheme?

I can well understand why there are GPs who look with anxiety at [this]… but that’s because they’re thinking about their own income and their own activity. Vaccinations are money for old rope, and a good money spinner, and not unreasonably GP partners are thinking about the finances of their own practice. That’s totally reasonable but what matters to the patient is fast, accessible care, wherever that is.

The sentence “GP partners are thinking about the finances of their own practice.” is deeply depressing, with Streeting apparently believing patient care is of secondary importance to the profession. If I were thinking purely of my own financial position, I wouldn’t be a GP partner. Income has dropped over the last 10 years, and every wage increase for my staff comes out of this dwindling pot. That means my income goes down. I could earn far more as a locum, and have a better work-life balance if I became salaried.

Streeting goes on to say that “the way GP practices operate financially is a murky, opaque business” – an assertion belied by the ease with which the Times managed to show it in a small diagram as part of the article. He also appears to have forgotten we have to publish our earnings. It’s about as transparent as it gets. This is just a lie.

But moreover, the GP highlighted how Streeting’s comments are both dangerous and very anti-Labour Party – or rather, what the Labour Party should stand for:

Not only is this another kick in the teeth for GPs who have been singled out on a number of occasions by politicians, the NHS England CEO, and media for uninformed criticism, but it is likely to increase the abuse encountered by staff and clinicians in their work environments. We are still seeing waiting rooms trashed, and verbal abuse being levelled at staff daily. This article from an MP will be seen to legitimise it. It is further astonishing to see a Labour MP picking a fight with a union. Accusing them of having a “vested interest”? The only interest a union has is to support its members, and the BMA of recent years past can hardly be accused of having done that. Streeting quotes Nye Bevan’s “stuffed their mouths with gold” speech, seemingly oblivious to the fact that the doctors to who he refers are long gone, and visiting the sins of the father on the sons is insulting and gratuitous.

The truth of the matter is that the NHS is in its current parlous state after 12 years of underfunding. Of course aspects can be improved, but to suggest we do not continuously strive to do that is nonsense. Many people suggest it is ‘not fit for purpose’, few have a fully costed alternative. We spend about £3,000 per person per year on health in the UK; it is £7,500 in the US.

A “responsibility to patients” in the NHS

Why is the GP Partnership model worth retaining? Because what you have is a group of people who have decided to take on a responsibility to patients. They manage the practice and provide the clinical cover. As it is their practice, if ill they will continue to work unless they pose a risk to patients. They won’t call in sick – they would have to find the cover. They work as many hours unpaid overtime as is needed to ensure all the letters, discharge summaries, blood test results, prescriptions and other paperwork are dealt with. This often involves another five hours or more work once the last patient is seen. They know their patients and have committed to continuity of care by anchoring themselves to partnership. If you take that away, you will be paying more for managers, and need significantly more GP time to get the work done. There are 7,000 too few GPs in the current system. In the long term a salaried workforce would certainly improve GP working conditions significantly, but we simply don’t have enough GPs. The service relies on partner GPs working ludicrously long hours to take up the slack. And it takes 10 years to train a GP, at a time when they are leaving in increasing numbers because of the cumulative strain.

Streeting has enraged many medical professionals and members of the public alike. As the EveryDoctor GP summed up:

Having said all this about GPs and doctors and the BMA, Streeting closes by saying he “love[s] and appreciate[s] people working in [the NHS]”. Presumably just not GP partners, eh?

It remains to be seen how, if Labour got into government, Streeting would convince GPs his plans are well-intentioned and workable. Moreover, he’d have to convince us all they were good for patients, too. And based on the reaction of the GP the Canary spoke to, it seems like the shadow health secretary’s ideas would fail on both counts.

Support EveryDoctor UK by donating to the group here.