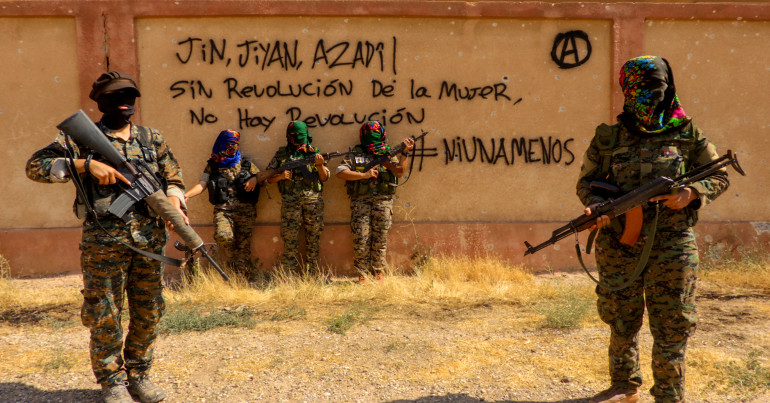 An anti-fascist fighter has spoken to The Canary about how he and his comrades-in-arms solve their problems while fighting against Daesh (Isis/Isil).

Joining the fight to defend a progressive revolution from fascist invaders

In 2012, a revolution began in the majority-Kurdish region of Rojava in northern Syria. People organised themselves into communes, declared autonomy, and began practising stateless direct democracy. And hundreds of women and men from around the world volunteered to help defend the revolution. The Canary recently spoke to one of these fighters – Argeş – and over the coming weeks we’ll be releasing his account in several parts. [Read Part 1 here.]

The Rojava revolution is based on the values of popular grassroots democracy, women’s freedom and living a communal life. And The Canary asked Argeş if life in Kurdish-led People’s Protection Units (YPG) lived up to these values, and how problems were solved between the people fighting in his battalion (the International Freedom Battalion – or IFB).

The Canary: How did the ideas of the revolution manifest themselves in the International Freedom Battalion?

Argeş: One of the really cool things about it was that there was a horizontal structure. We had commanders, but there was a rotation. We had a battalion commander who was rotated every three months and was chosen by our administration, which was made up of a representative from each of the [political] parties [that are represented in the IFB], and then an international representative. They would choose who would be the next battalion commander.

We [also] had commanders who would rotate every few months and were selected by the administration and the internationals.

You could question your commander. There was no ‘yes sir, no sir’. There was always room for suggestions.

We had a balance of men and women comrades. The balance kept us all in check and accountable.

Then, the most important part was the [at least daily] ‘Tekmîl’ process. Tekmîl, from what I understand of the literal translation, means ‘report’.

Tekmîl is based on criticism, self-criticism and suggestions. The idea is that we develop a culture of constructive criticism where we learn how to give and also to take criticism without making it personal, without getting into a polemic, without debating it or feeling like we’re under attack or that there’s a competition.

The idea is that we get into the habit of saying, [for example] ‘today I saw Comrade ‘A’ exhibiting patriarchal behaviour’, and make criticism and suggest that he be more careful. And the idea is that the person won’t immediately respond to it – he will absorb it, think about it, and think: ‘even if I don’t really agree with it, maybe there is something there. Maybe I should consider how I have been behaving and try to correct that and be more conscious of it.’

In the YPG, there was a commander who would facilitate the tekmîl. We would go one by one, giving self-critique or critique to comrades, whether they were in our little team, or in the commune in general, or even if it was someone else you had seen during the day.

During the criticism, no one can respond and no one can repeat the same criticism… We can’t just go around in a circle and say ‘yes, I also criticise this person for that: they should be more conscious’. It should be just that the criticism is said and the comrade knows. You don’t need to repeat it, because you have to protect this culture of tekmîl so people don’t feel that they’re under attack. So we try to say it in a very neutral, objective way. If you’re [speaking with] too much emotion then the criticism just won’t be received – people naturally put up a defensive mechanism when we feel under attack.

So in a nutshell, that’s tekmîl. After the self-criticism, criticism, and then people can give suggestions. Afterwards, everyone considers it, and if the problem continues you just keep bringing it up in tekmîl. If something is not addressed, you can bring it up in a ‘platform’, which is a more intensive mechanism for addressing behaviours or criticisms. And then you can get into the full discussion of why. The person can accept, or not accept, and each comrade can give their criticism of the behaviour.

So it was a great way for us all to be very honest with each other; to live in an environment where we could be very transparent – where we could just focus on working together without allowing resentment to build up, where we can always diffuse the internal issues.

I don’t think you have that in state militaries – this culture of positive constructive criticism where everyone is accountable.

Tom is part of the Shoal Collective, a cooperative producing writing for social justice and a world beyond capitalism. Twitter: @ShoalCollective