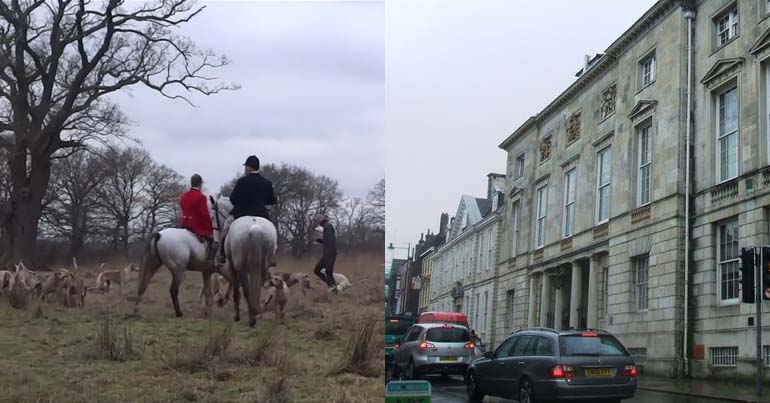 In early February, a hunt saboteur went through a five-day crown court trial for serious stalking and harassment. But jurors took less than an hour to find her not guilty. Now she speaks out about the ordeal that made her life “unbearable”.

Maggie, a 64-year-old monitor and saboteur with West Sussex Hunt Sabs, was in Lewes Crown Court between 4 and 8 February. She faced two charges of “serious harassment and stalking” against a member of the Crawley and Horsham Hunt. Sussex Police brought charges following a voluntary police interview in July 2017. But the story began nearly two years earlier.

In December 2015, Maggie raised concerns on Twitter about a person she had seen out with the hunt. Maggie asked their employer – an animal-related business – what its policies are on staff being part of a hunt. The employer responded that it doesn’t dictate to employees what they can or can’t do outside of work. As a result, Maggie dropped the issue and forgot about it. But, she told The Canary, that changed a month later:

In January 2016, I had a phone call from a police officer saying did I do the tweet [because] a complaint had been made against it by [the person concerned]. I… said it was just a tweet. I said there was nothing horrible, I didn’t name them. And he said, ‘they’ve also been complaining that you’ve been standing outside their home’.

Maggie said this was a lie. She didn’t even know where the person lived.

Sussex Police invited Maggie to a voluntary interview in July 2017. This came after multiple allegations by hunt members that she’d been standing outside their homes, photographing and harassing them. Police even presented video of one such alleged incident during the interview.

Maggie described to The Canary the footage she saw:

They showed me a small piece of video which was taken of me with a small child, out of the hunting season, walking along the South Downs Link. It does go past [the Crawley and Horsham] kennels but it’s actually a public area as well. There’s a car park. … I was so far away, you could hardly even see it was me [in the video].

At the time of this footage, Maggie said one of the hunt’s terriermen also approached her. He claimed that she had been using binoculars and a camera to film the kennels. Maggie said she had nothing of the sort and later reported the incident to the police. The police didn’t do anything about her complaint, she claimed. On the other hand, the brief video from a member of the hunt formed the basis of Maggie’s court trial.

That year’s cub hunting began the following month, August. Although police hadn’t yet charged her, Maggie conferred with her solicitor about monitoring the hunt. The solicitor advised Maggie to steer clear of the kennels, which she did. But the terrierman found other ways to claim harassment, Maggie said:

I just went out with other hunt monitors… and the terrierman who had put the complaints in started to ride up to me on his quad bike… filming me saying: ‘You’re stalking me in my place of work’. And he did that all the time, every time he saw me.

Then, in January 2018, Maggie found out the Crown Prosecution Service (CPS) had authorised charges against her. She faced two charges under Section 4A of the Protection from Harassment Act. The CPS describes this charge as necessary when actions cause “serious alarm or distress” or “fear that violence will be used”.

The charges covered a period of time between 17 October 2014 and 9 November 2017. In addition to the tweet and video, Maggie said the hunt also alleged she had been outside of the kennels “four or five times a week”.

She told The Canary how surprised she was:

The police know that we monitor the hunt. They know we go to the kennels. We go to meetings with the police and talk about things. Not once in them three years did any police officer say to me, ‘You’re harassing people and you’ve got to stop.’ … Nobody mentioned it.

At Maggie’s plea hearing on 7 February 2018, the magistrate gave her unconditional bail and the choice of magistrate or crown court for the case to be heard. Owing to concerns over bias at the magistrates court, she chose to go to Lewes Crown Court.

The allegations and legal proceedings began having an effect on Maggie’s personal life. After the CPS authorised her charges, Maggie was suspended from her job as a childminder. Ofsted suspended her registration and investigated her. The children in her supervision had their schedules disrupted as their families made last-minute alternative arrangements.

Ofsted’s investigation found no wrongdoing by Maggie. It reinstated her registration in January 2018, after just a week. But the post-Christmas timing, plus the alternative arrangements that were already in place, meant she had no work – and no income – for nearly three months. This, as well as the looming threat of a major trial, changed her life. The stress led to physical ailments as well. Maggie’s psoriatic arthritis flared up and led to a “massive outbreak” of psoriasis. She said her GP ascribed this directly to the stress of the proceedings. And, in February 2017, she went onto anti-depressant medication, which she takes to this day.

It’s certainly had a really big impact on my life. Financially, health-wise, mentally. Because, you know, at the end of the day I couldn’t figure out what it was that I had done that was wrong and why I suddenly found myself with two charges of serious harassment and stalking… you can go to prison on these charges… It’s been quite a struggle overall for not actually doing anything. For just monitoring a hunt that has got two convictions and they’re still illegally hunting.

Less than one hour

The trial began on 4 February and lasted five days. Her December 2015 tweet was mentioned in court, with the person it concerned giving evidence that the tweet upset them. In addition to this, the allegations of Maggie outside the Crawley and Horsham Hunt’s kennels were provided. But ultimately, the prosecution only offered one piece of documentary evidence: the brief video of Maggie on the South Downs Link.

On the other hand, Maggie was able to present two videos of harassment by the same terrierman that made allegations against her. One of them even showed him attacking Maggie. As a result, it took less than an hour for the jury to reach a not guilty verdict.

The Canary asked Maggie how she felt when the jury’s decision was given:

I felt like I was suddenly floating because all this worry had gone and if it’d been appropriate I would have hugged everybody in that court…. Because for three years I thought I was guilty. That’s how they made me feel. Also my family, my daughters, they’ve suffered as well. My mum, who is 87, I told her and she has been so worried about this whole thing.

Her whole family, she said, was “over the moon” at the verdict.

The Canary asked Maggie why she believed she was targeted by these allegations:

She also suggested that the Crawley and Horsham Hunt’s links to Tory MP Nicholas Soames put pressure on the police to continue with the case despite a lack of evidence. In fact, she said, they may not have wanted to go to court at all:

I think they really thought that, because of my job and all the other things that I would just go, ‘I just want this out of my life’.

Maggie didn’t, though. She chose to challenge these allegations knowing the hunt’s claims were false.

Sussex Police confirmed to The Canary that the prosecution presented only one piece of video footage in court. It said there were also “items of evidence including written statements relating to a number of allegations over a period of several months”.

And when asked whether the link to Soames placed pressure on the police, a spokesperson said:

We investigate fairly and without bias, balancing the rights of all those involved.

For sabs and monitors everywhere

Hunts claiming harassment by saboteurs is a dirty tactic that attempts to squash legal protest. The Canary asked a number of saboteur groups if they’d experienced allegations of harassment by hunts. Three groups said they had, and one more said it “fully anticipates” being on the rough end of such allegations at some point. Furthermore, a number of hunts have tried taking out injunctions including the Fitzwilliam Hunt and – incredibly – the Crawley and Horsham Hunt.

By taking the case to crown court, Maggie forced the hunt’s opinions into the general public. And the jury showed the hunt just how ridiculous the wider public actually find its beliefs. But first and foremost, Maggie should be praised for the brave choice of fighting this all the way. And this was driven, she told The Canary, not just by thoughts of herself but for anti-hunting campaigners everywhere:

If I had accepted that, every other hunt monitor and hunt sab, the League Against Cruel Sports, would have been faced basically with the same thing. So I couldn’t do that to them or the foxes.