Despite Washington's best efforts, Venezuelans are resisting the return of neoliberalism - The Canary 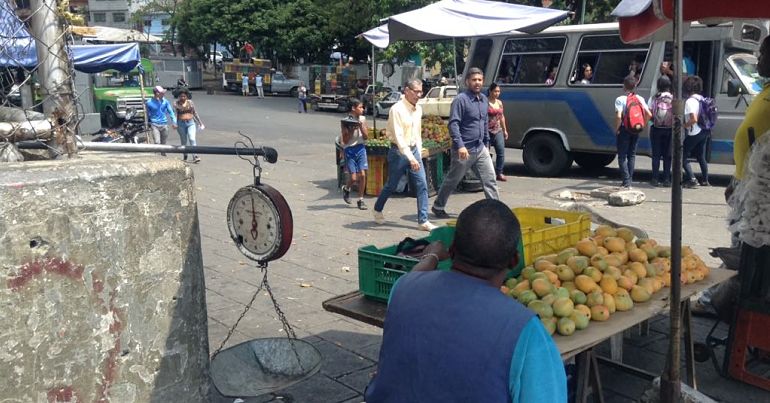 Like a precision laser, most coverage of Venezuela in recent years has focused on the Bolivarian governments of Hugo Chávez and his successor Nicolás Maduro. What came before is largely overlooked. But if we focused on Venezuela’s previous years of neoliberalism, we’d find that the economic project sourly missed by Washington was not a pretty picture. In this sense, ‘change’ can often sound appealing until you find out what it actually means.

The Canary spoke with Iván Padilla Bravo and Juan Contreras about life before Chávez, the links between past and present social movements, and whether the progressive gains of the Bolivarian revolution can survive Venezuela’s crisis. Bravo is a renowned social activist in Venezuela with past links to revolutionary movements; Contreras is the co-founder of the Coordinadora Simón Bolívar social movement (colectivo) in Caracas.

Today, the US and its ‘coalition of the willing’ seem to be offering Venezuela a cruel ultimatum: neoliberalism or death.

In the words of author Alan MacLeod, however, Venezuela’s period of neoliberalism prior to Chávez:

led to significant increases in inequality, poverty, and unemployment, which in turn raised the temperature in an already volatile political climate. The 1990s in particular was a decade marked by coups, impeachments, scandals, near-daily protests.

Many Venezuelans don’t want a return to these days. Indeed, for Venezuela’s poorest people, structural inequalities associated with neoliberalism often indirectly meant death. For them, Washington’s ultimatum may be otherwise read as: death now, or death later.

The same media outlets acting as cheerleaders for Washington’s coup attempt today largely ignored the major socio-economic achievements of the Chávez government. According to a study by the University of the West of England, out of 304 BBC reports published between 1998 and 2008:

only 3 of those articles mentioned any of the positive policies introduced by the Chávez administration.

The result, it seems, is a significant misunderstanding about what came before Chávez, and what might come after Chavismo.

The Canary asked Padilla about Venezuela’s political system before Chávez. He said:

After the fall of the Pérez Jiménez military dictatorship in the late 1950s, we re-began with a false democracy named a ‘representative democracy’. We had the same domination that existed before; the same as the dictatorship.

The most horrible persecution – the disappearances, murders, and imprisonments – occurred in this period. And this provoked the creation of movements that aimed to fulfil the ideology of our liberators – of Simón Bolivar, Ezequiel Zamora.

Padilla continued by talking about the role of revolutionary social movements in this struggle, and their links with the rise of Chávez:

I don’t doubt that these movements had some type of indirect influence on the movement that brought Chávez to power. But the direct link is less significant.

Contreras began by speaking about his colectivo’s “immortalised” history:

The colectivo is based in one of the poorer neighbourhoods of Caracas, named 23 De Enero. Like many such areas, it is demonised in the international media for violence and reported lawlessness. Locals nonetheless speak of the tightness of their community. On evenings, for instance, the area’s sports fields – built during the Chávez administration – are filled with children playing baseball and football.

Reclaiming spaces is important. During the fourth republic [prior to the 1999 Venezuelan constitution], public spaces were taken over by crime. But our community turned them into places that the community could use.

By focusing on sports, we can help young people integrate into their communities. Our quality of life has improved here. We’ve undone lots of the harm done by privatisation.

I believe there’s an international campaign to criminalise and demonise our communities: workers, rural workers, indigenous groups, and people from poor neighbourhoods. They stigmatise people organising inside the community. Why? Because grassroots organisations are the guardians of the popular revolutionary processes.

He then spoke about repression in such areas before Chávez:

Areas like here were repressed; for decades, this area was subject to repression. People came here and fought us.

They never speak about that in the press. They don’t speak about the guarimbas [opposition-aligned violent protests] that attack public spaces – that wasn’t colectivos assassinating police or harming public buildings.

Colectivos, he said, form one of the front lines in Venezuela’s battle against imperialism:

Obviously, there’s direct European involvement with US imperialism in Latin America. The UK government, for example, stole our gold, and the UK population should criticise their government for that. We have the right to choose our own governments, while the Western governments want to elect their own junta.

Even if the Bolivarian government doesn’t survive the current crisis, the progressive process it helped to set in motion may well survive through Venezuela’s mass social movements. And these may be key in resisting the neoliberal onslaught that many expect if the US-backed opposition takes power.

It is “the people’s engagement,” that holds the key to the success of the Bolivarian revolution in Venezuela.