US chose 'the violent and illegal path' against peace activists, embassy protector tells The Canary - The Canary 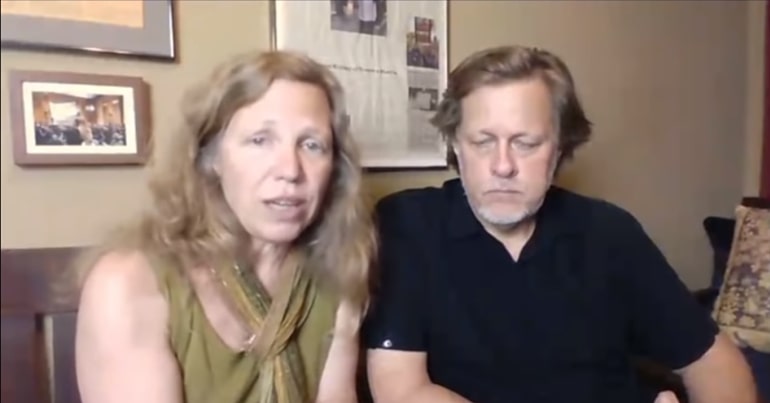 For 37 days, a group of peace activists stayed in the Venezuelan embassy in Washington to resist threats from the country’s US-backed opposition to seize the premises. By 14 May, only four activists remained inside the embassy, claiming defiantly: “we are not going to leave voluntarily”. But on 16 May, heavily armed police evicted them, breaking international law in the process.

One of the final activists was Margaret Flowers – a paediatrician, social justice activist, and co-director of Popular Resistance. And she spoke exclusively to The Canary about the Embassy Protection Collective, and where the struggle goes from now.

Events in Washington seemed to play out like a perfect metaphor for the ongoing coup attempt in Venezuela itself, with an elite- and media-backed campaign trying to suffocate the collective by blocking vital resources. Opposition supporters, meanwhile, spouted racist and sexist insults at those inside; activists from peace group CODEPINK even received death threats. And after the illegal eviction of the remaining activists, coup representative Carlos Vecchio reportedly “suspended the building’s inviolability & agreed to “waive any & all claims” of damage to its property by US agents”. Similar pillaging of Venezuela could be expected should the US-backed opposition gain power.

Flowers began by explaining her experience inside the embassy:

Initially, the experience inside the embassy was busy but simple. We were free to come and go. We organized public educational and cultural events and painted and hung banners. We organized to bring more people to the embassy and to orient them when they arrived. We had working groups focused on different tasks such as managing food, cleaning, assigning offices for sleeping, building maintenance and security. We had nightly organizing meetings, regular non-violence training and chat groups for communication with those inside and outside the embassy. We had a leadership group composed of CODEPINK, Popular Resistance and the ANSWER Coalition, but many of our decisions were made collectively in the meetings and chat groups. We had people on watch 24 hours a day. We expected police to raid the building at some point, although we made it clear we were there legally, with the permission of the elected Venezuelan government.

When we heard about the coup attempt on April 30, we anticipated the pro-coup people coming, but we were not prepared for the complicity between them and the police and the police’s lack of regard for the integrity of the embassy and the safety of embassy protectors. After April 30, we were no longer free to come and go or to get supplies inside. On May 9, the electricity was turned off and the water stopped a few days after that. We, on the inside and outside, were subjected to constant noise – loud music, sirens, air horns – insults, taunting and threats of rape and death, and strobe lights. The pro-coup people damaged the building and broke in a few times. We watched our allies on the outside being physically assaulted and arrested while the ones doing the assaulting had no consequences. It was stressful, but when we met and talked about it, we felt greater solidarity with Venezuelans who have been living under these conditions for a long time and it deepened our resolve to stay.

Like in Venezuela, those inside the embassy were forced to respond to circumstances and develop new ways of living:

Much of our time was spent securing the building, trying to get supplies in, and gathering what supplies we had in the building. We rationed the food to two small meals a day and discussed fasting if necessary. We collected water and built two rainwater collectors on the roof. We experimented with soaking pasta and lentils to soften them for eating. We charged our phones using the few cars we had in the garage and experimented with cooking on the engine. And we created a toilet in the garage since we didn’t want to waste water flushing toilets.

“We were forcing the US to make a choice between the peaceful and legal path or the violent and illegal path. It chose the latter.”

On 13 May, an unsigned eviction notice appeared on the embassy’s door. This recognised Guaidó’s self-proclaimed parallel government.

The Canary asked Flowers what compelled her, and the other embassy protectors, to risk arrest by defying the request to leave. She continued:

We did not believe the eviction notice was valid. It was on plain paper without letterhead and lacked a signature or official agency. We were there legally with permission of the elected government.
From the beginning, our goal was to stop the United States from violating the Vienna Convention by giving the embassy to the coup leaders. We viewed ourselves as interim protectors until the Venezuelan and US government could complete ‘protecting power agreements’. We hoped we could hold the space long enough for that to occur. We viewed every day we were there as a victory, knowing the US might remove us at any time. We made it clear to US officials verbally and in writing that we would not leave voluntarily until the protecting power agreements were in place. We were forcing the US to make a choice between the peaceful and legal path or the violent and illegal path. It chose the latter.
What compelled me was a deep opposition to the US foreign policy of domination, violation of human rights, and violence. I believe that, as a US citizen, I have a responsibility to do what I can to stop that. I also felt a deep solidarity with Venezuelans. I travelled to Venezuela in March and was impressed by the positive programs there such as food, housing, education and health care, and the resistance to US imperialism.

The Canary asked Flowers if the US legal system was starting to feel like a Kafkaesque nightmare:

The whole situation was Kafkaesque. We know the legal system in the US is designed to protect the interests of power holders. This has been demonstrated throughout my lifetime. So I never had an illusion it would be different. We wanted to push the US to reveal itself – its lies, its disregard for the rule of law – and that is what happened. We hope that, through this legal process, we can do more to expose the truth. And we really hope the Venezuelan government will use international bodies such as the United Nations and the International Court of Justice to hold the US accountable for its actions. In fact, we are starting to organize toward a national mobilization in New York City when the UN General Assembly meets in September.

As many have noted, moreover, this nightmare has been reinforced by a corporate media that treated the collective with near-unanimous hostility. Flowers continued:

The Washington Post did a number of articles about the events at the embassy. We viewed them as opposition media. But that is not a surprise given they are owned by Amazon (Jeff Bezos), which has large contracts with the Department of Defense. The New York Times also provided some coverage at the end, but they are also an arm of US empire. Some of the local ABC and NBC stations showed up near the end, but their coverage was similarly biased. We have a very concentrated corporate media in the US, which has little credibility because of its obviously biased coverage. We are used to having to make our own media. We had embedded journalists in the embassy from The Grayzone Project and MintPress News, and TeleSur covered us 24/7. We used social media to get our message out as much as possible. And we put our messages on the embassy itself so that any images could speak for us.

Where does the struggle go from here?

The US government has now evicted the remaining embassy protectors. But the struggle is far from over. The Venezuelan opposition has not moved into the embassy; and various parties – including the Venezuelan government – are trying to enact a protecting power agreement between Turkey and Venezuela. Such an agreement would let the Turkish government take over the embassy until the US and Venezuela can resolve their diplomatic dispute. This agreement, however, would suggest that the US lacks confidence in Guaidó’s parallel government.

We have been working for a while to reinvigorate the anti-war movement in the United States that was decimated under Barack Obama. These events brought groups together that don’t typically work together and it has brought more energy to anti-war efforts. We will work to build on that. We returned to the embassy on Saturday and Sunday for rallies, a march, and a press conference. We had meetings on Monday to discuss next steps. We will hold events through the summer to build toward a mass mobilization in New York City in September. We also understand that the US has an agreement with Switzerland to protect the US embassy in Caracas and that Venezuela is close to signing an agreement with Turkey to protect the Venezuelan embassy in Washington, DC. We hope those agreements will be approved and we will pressure the State Department to approve them. We are glad that Carlos Vecchio has not yet been given the embassy. We hope that doesn’t happen, but if it does, we will return to protest it. We are working to change the narrative around US foreign policy. The world is changing. US empire is fading. It is time for the US to recognize that and find ways to be a respected and cooperative member of the global community. We will push for peace and the rule of law and try to build national consensus around that.

There were scores of people involved in the Embassy Protection Collective. What was accomplished would not have happened without the efforts of everyone. We were able to sustain our presence in the embassy because allies showed up outside every day to rally and try to get supplies in. They experienced grievous insults, threats and assaults. Every successful effort to get supplies in took sacrifice. That meant so much to us, as did the solidarity from people and social movements in Venezuela and around the world. We are so deeply appreciative of everyone who was involved. We had a sign inside that said ‘Amor y Resistencia.’ That is what grounded us when faced with the hate and violence of the pro-coup forces. We must keep building love and resistance in our work for a better world for all of us.

And the battle is far from over. International law is only as powerful as those willing to protect it – a point which holds particular weight in Washington.