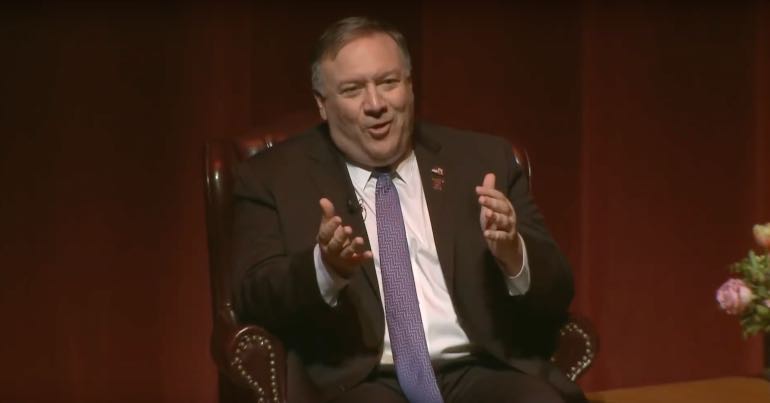 The current US secretary of state – also an ex-director of the CIA – recently put out a statement regarding Iran. And it was so outrageous that the response on Twitter was overwhelming.

Mike Pompeo claimed – apparently without a hint of irony or shame – that the Iranian government had been engaged in “40 years of unprovoked aggression”:

Going to the Hill shortly to have a serious discussion with lawmakers about 40 years of unprovoked aggression from the Iranian regime and to explain the prudent steps we’re taking to deter violence, protect American interests, and support the brave Iranian people.

The reaction to Pompeo’s assertion was swift, with journalist Ben Norton writing:

Here in the real world, the US has over 70 years of unprovoked aggression against Iran:
-Overthrowing Iran's elected gov in 1953 for oil companies
-Propping up the shah's murderous monarchy
-Supporting Saddam Hussein's bloody war on Iran
-Proxy wars
-Illegal, crippling sanctions

Overthrowing the elected government of Iran, unleashing a reign of terror

In 1952, the UK government repeatedly pushed the US government to help overthrow the progressive and democratically elected government of Mohammad Mosaddegh. In 1953, the CIA and MI6 orchestrated the overthrow of the Iranian government and imposed the brutally repressive rule of the Shah. The US and UK governments also aided and abetted Iran’s notoriously vicious SAVAK (secret police), until the Shah was himself overthrown in 1979 by a revolution.

You stopped at 40 years, why? Take it back a little further to when the US overthrow democratically-elected Iranian Prime Minister Mosaddeqh. pic.twitter.com/PSFtZnlgWD

Pompeo’s claims also ignore the murder of four Iranian civilian nuclear scientists, apparently organised by Israel’s Mossad, between 2010 and 2012. And both former US presidents George W Bush and Barack Obama attacked the country with a computer virus, reportedly to slow their nuclear programme. The Iranian government has recently claimed that its “infrastructure” has been attacked by another computer virus.

Pompeo’s statements also ignore the effect of long-standing US sanctions on Iran that go back to the early days of the revolution. The most recent US sanctions result from Washington’s illegal withdrawal from the nuclear agreement with Iran; an agreement that the International Atomic and Energy Agency and the French, British, and German governments have admitted Iran was fully abiding by. And as the following video from journalist Rania Khalek shows, US-imposed sanctions “kill”.

My latest video on how and why sanctions kill.

US sanctions are killing people in Iran, Syria AND Venezuela. It’s economic terrorism and it’s deadly. It has to stop! pic.twitter.com/lHFKLKpWHy

Phillip H. Gordon and Robert Malley, both former special Middle East advisers to Obama, called US sanctions “economic warfare” which the Iranians may ultimately have to ‘respond’ to.

The US has also been building up its military presence in the Persian Gulf and Middle East region, citing the need to “deter” Iran. US president Donald Trump also took the unprecedented step of labelling a military branch of the Iranian government a terrorist organisation. Major General Christopher Ghika, the top British officer involved in anti-Daesh (Isis/Isil) operations in Iraq and Syria, recently told journalists:

However, US central command proceeded to contradict Major General Ghika with a one-paragraph statement.

One user reflected on how Pompeo recently celebrated lying and cheating as standard operating procedure at the CIA:

Straight from the Horses Arse.

Pompeo: “I was CIA Director, we lie, cheat, we steal. we even had entire training courses. It reminds you of the glory of the American experiment" pic.twitter.com/WZtkUjZtFG

Another commentator made reference to the false claims made by the George W Bush administration that the Iraqi government was attempting to obtain “yellowcake” Uranium, to help justify the illegal Anglo-American invasion of Iraq:

Don’t forget to bring the yellowcake.

Former colonel Lawrence Wilkerson also warned recently that “we’re looking at essentially the same train of events” as the “catastrophic decision and then execution of that decision to invade… Iraq in 2003”. Wilkerson served as former chief of staff to US secretary of state Colin Powell, when Powell made the case for the illegal 2003 invasion of Iraq.

Democratic congresswoman Tulsi Gabbard has warned that war with Iran would “prove far more costly and devastating than anything we experienced in Iraq”.

Let’s make sure that Pompeo’s false and misleading characterisation of Iranian policies as being “unprovoked” are consistently challenged. For all of our sakes.