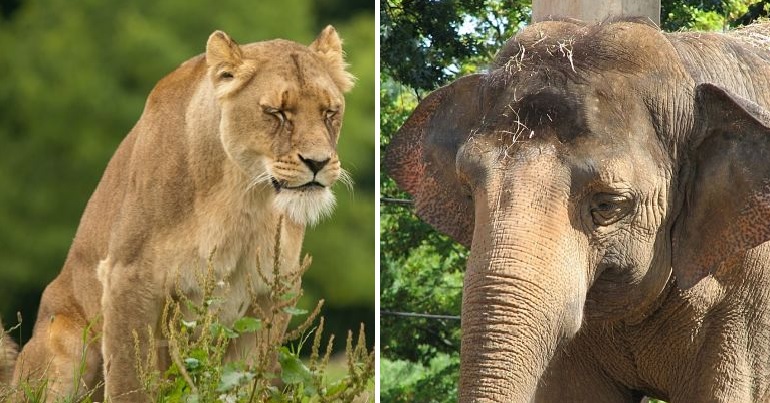 African lions and Asian elephants are in a very precarious situation. Both species have alarmingly small estimated remaining wild populations. People also keep significant populations of them enslaved for tourism. Additionally, the bones of slaughtered captive lions are a popular ingredient in Traditional Chinese Medicine (TCM).

As if that wasn’t enough, these species also have another troubling thing in common. They’re potentially at risk of contracting tuberculosis (TB) in their captive settings and passing it on to other beings they interact with, be they human or other animals.

Lions and elephants are icons of the natural world. They also play a crucial role in the ecosystems in which they exist. As The Canary has previously reported, for example, elephants are a keystone species. This means they are integral to the environments they exist in. If elephants are absent, these ecological systems collapse because so many other species are dependent on them. Lions, meanwhile, are apex predators. As with keystone species, apex predators have a profound impact on the ecosystems in which they exist, partly through their predation of other species. All these ecosystems, in turn, prop up the wider climatic stability of the Earth.

In short, these species are not only iconic, they’re essential. Unfortunately, however, they face an uncertain future. African lions numbered 200,000 across the continent just a century ago. But estimates for populations of wild individuals currently range between 13,000-20,000. Their declining numbers are due to numerous issues, such as conflict with people (often because of their predation of farmed animals). Trophy hunting, habitat loss and disturbance are also among the problems they face. Asiatic lions, meanwhile, now only number in the hundreds.

Populations of both African and Asian elephants are also a shadow of their former strength. That’s particularly true in terms of the latter, whose remaining wild populations are estimated between 20,000 and 40,000. They also face widespread loss of their homes, and people – both poachers and trophy hunters – target them for their tusks. And to make matters worse, lions, elephants and countless other species are threatened by the climate crisis too.

A life in captivity

A significant number of lions and elephants are also in captivity. South Africa, in particular, has a large captive lion farming industry. A 2020 book claimed there are around 300 lion farms in the country, which breed the big cats. As The Canary previously reported, every stage in the life cycle of these lions offers the opportunity for profit. As cubs, tourists and volunteers pay to pet and care for them. When they’re a little older, people pay to walk with them. Then hunters pay to shoot them, when they’re older still. Finally, the farms butcher their carcasses and sell their bones for TCM, which people pay to consume.

Meanwhile, elephants (African and Asian) are held captive around the world for use in tourism and entertainment. Most captive elephants used in tourism, particularly in Asia, face a training process called pajan to make them compliant. Their ‘keepers’ (mahouts) routinely beat, starve, stab, chain, and physically ‘crush’ them to ‘break their spirits’. The process is so violent and inhumane that Save the Asian Elephant’s (STAE) CEO Duncan McNair previously told The Canary that around half of the elephants who endure it die as a result.

In short, both of these captivity-based industries are operating on particularly shaky ethical grounds.

Breeding and keeping these species in captivity for tourism and TCM also has public health implications.

According to the World Health Organisation (WHO), TB is among the top 10 causes of death worldwide. In 2019, 10 million people fell ill with the disease and 1.4 million died of it, predominantly in developing countries. But it is curable and preventable. As such, it’s widely considered a “disease of poverty”, because a lack of access to diagnosis and treatment, and living conditions that encourage its spread, play a major role in its transmission.

TB is caused by Mycobacterium tuberculosis and is mainly spread from person to person, via germs they transmit in the air. But another mycobacterium called Mycobacterium bovis (M bovis) additionally causes zoonotic, or bovine, TB. A zoonotic disease is one that can transfer between humans and other animals, like coronavirus (Covid-19) appears to have done. There were approximately 140,000 new cases of zoonotic TB globally in 2019.

Although zoonotic TB is mostly associated with cows, lions can also get the disease. This is true for wild populations and captive ones. In a 2018 report on the issue, the NGO Voice4Lions argued that the risk of TB spreading among captive lion populations is “raised to a high level” because of their cramped living conditions. In a recent press release on the issue, the Campaign to Ban Trophy Hunting (CBTH) also said that captive lions regularly suffer inbreeding and farms often keep them in “unsanitary conditions, with inadequate nutrition”. It said this can “increase both transmission and susceptibility to the disease”.

The Voice4Lions report also asserted that TB present in captive lions poses a “substantial risk” to humans. It referenced a 2016 statement from Stellenbosch University’s professor Paul Van Helden, who asserted that lions can catch TB from infected prey and humans. He also stated that:

He further noted that bovine TB “has the propensity to cause TB in humans often in organs other than the lung”, which makes it more difficult to diagnose. Human TB generally affects the lungs. Yale University Medical School’s professor Irvin Modlin has also raised the alarm about the potential transmission of tuberculosis, and traces of dangerous tranquilisers, in lion bones. Meanwhile, a study produced by World Animal Protection and Blood Lions in 2020 argued that the close contact between captive lions and people, such as farm workers and tourists, “creates opportunities for the spread of zoonotic diseases”.

Elephants are also susceptible to TB, of both the bovine and human variety. In a 2020 article, National Geographic reported on the possible cases of captive elephants infecting zoo staff with TB in the US. As the outlet explained, because “elephants can get the disease from humans, they can transmit it back to us”. No one has documented cases of elephants transmitting TB to zoo-goers in the country. And Tulsa Zoo veterinarian Kay Backues insisted to National Geographic that visiting zoos and circuses isn’t a TB risk. But co-founder of Elephant Care International Susan Mikota argued that there’s a lack of understanding and studying of transmission. Moreover, she asserted that:

Tuberculosis also usually takes a significant time to develop, in both humans and other animals. No symptoms may be apparent for weeks, months, or even years.

Risk to the wild

In 2020, STAE elicited an independent scientific opinion from biologist and medical scientist Clifford Warwick on the risk of elephant-associated human TB and tourism. Warwick’s comments pertain to elephant tourism in in-situ situations, i.e. in elephants’ natural range countries, that involve activities like “rides, photo-opportunities, petting experiences, and feeding sessions”. He asserted [pdf p4] that the stress elephants face in their captive situations compromises their immune systems. This not only makes them more susceptible to disease, but also more likely to shed pathogens.

Warwick concluded that TB transmission is “unlikely safeguarded against in situations involving close contact and simplistic prevention and control measures”, which he said “are exactly the conditions” under which such elephant tourism happens.

Warwick further noted that the transmission of TB from captive elephants to wild ones has implications for conservation of the species. A 2017 study on the threat TB poses to conservation in South Asia also raised this concern, along with the risk of potential transmission to other endangered mammals and people who work with infected elephants.

Many of the people being put most at risk of TB transmission from these situations, such as farm workers in South Africa and tourism workers and TCM consumers in Asia, already live in high TB burden countries. So they hold the potential to make an already bad situation worse. The situation for the captive lions and elephants involved is, as previously described, already dire. Putting them at risk of contracting a debilitating and undoubtedly painful disease, therefore, adds one more injury to a vast list of injustices.

The fact that lion farming, elephant tourism, and even the pet trade may also pose a risk to wild populations of species already in crisis threatens to make a bad situation worse for the species in question and, indeed, everyone else. The world is already in the midst of a biodiversity crash that, on this interconnected planet, has severe implications for the future of life, including humans, on Earth. The biodiversity crisis needs to corrected, not made worse.

Clearly, the TB risk in these settings needs to be addressed. The relevant authorities could to some extent do so by introducing compulsory TB screening and testing measures. The provision of evidence-based guidance to people considering engaging with elephant or lion tourism, or consuming lion products, also needs to be a priority.

But, since coronavirus spread around the globe in 2020, the idea of a ‘One Health‘ approach to public health threats has gained traction. It’s an approach that embodies the notion that the world’s vast array of living beings are all in this together. So the health of all involved  – humans, other animals and the wider environment – must guide decision-making on health-related issues. In environmental law, meanwhile, there’s a standard called the precautionary principle. It dictates that when concerns arise that something is dangerous to the environment, or the beings within it, but scientific evidence is inconclusive, decision-makers should err on the side of caution, i.e. they should have the environment’s back.

Arguably, there’s an obvious One Health precautionary answer to the health – and indeed ethical – implications of these captive industries. It’s to phase out these inherently cruel and potentially dangerous practices.