It's time to 'Take Back Manchester' from the Tories. Here's how. - Canary 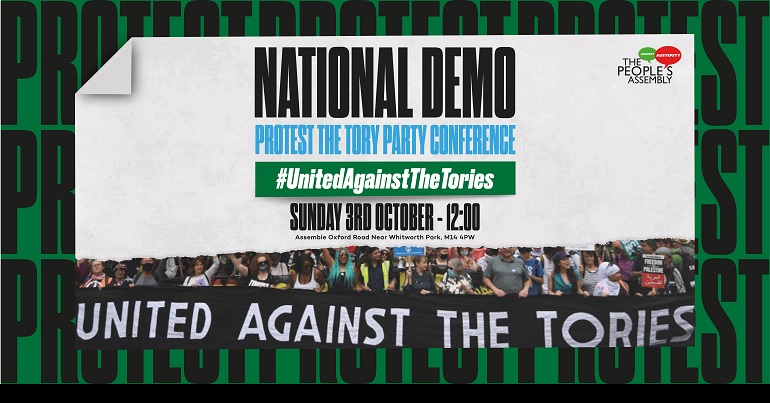 It’s that time of year again. September/October usually marks the Tory Party conference, and every other year it’s in Manchester. It is also an opportunity to protest against our right-wing overlords.

The People’s Assembly is back

The People’s Assembly first launched in 2013. Its initial mandate was clear: an end to the coalition government’s austerity programme and a reversal of its cuts. Its remit has since broadened. From protests on the rise in foodbank use to demanding a different kind of post-pandemic ‘new normal’, People’s Assembly has often been at the front of the UK’s political protest movement. And now, it’s once more got the Tory Party conference in its sights.

The group is holding a “Festival of Resistance” from 2-5 October in Manchester. Its main protest on Sunday 3 October starts at 12pm on Oxford Road (near Whitworth Park) M14 4PW: 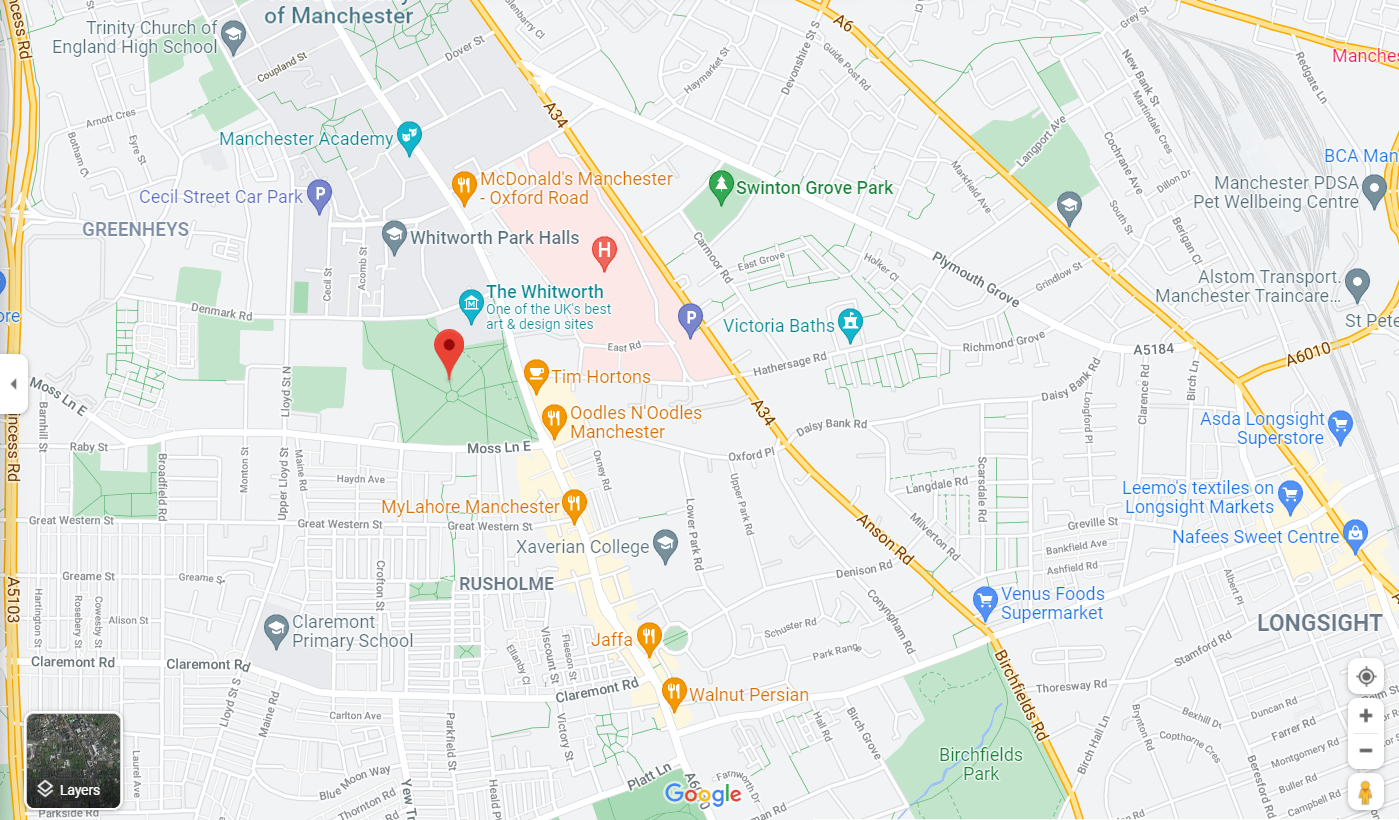 People’s Assembly said the demo would be:

where all different groups and movements are invited to come together to march in solidarity.

Groups supporting the action include CND, Jeremy Corbyn’s Peace and Justice Project, various trade unions, and more. People’s Assembly has a set of 12 demands of the Tories: 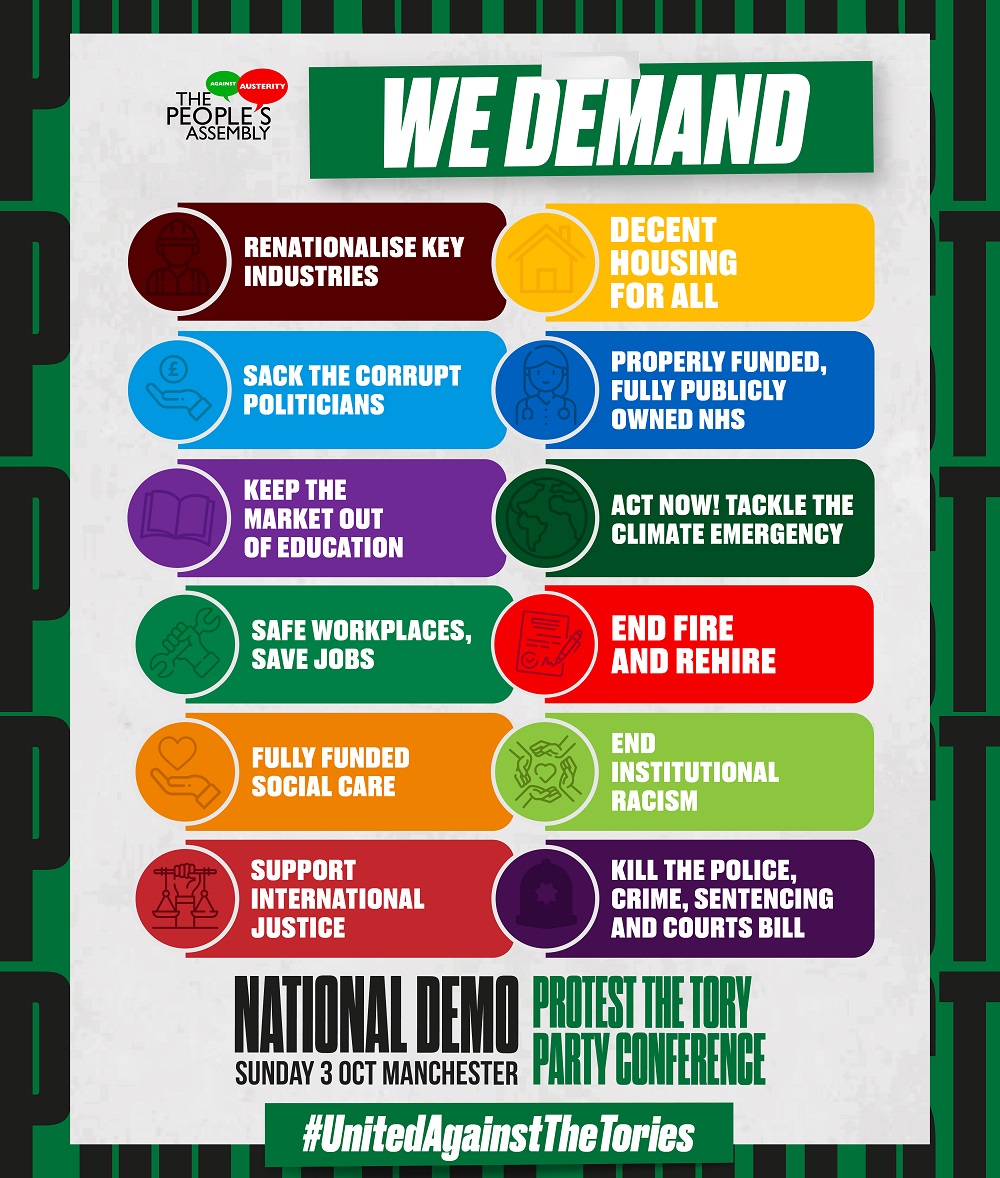 You can get involved online by posting on social media during the march using #UnitedAgainstTheTories. There are graphics you can use which are available here.

Resisting via a festival

The protest comes on top of a host of other events. Across the four days, talks and workshops will be held, along with live music and other performances.  People’s Assembly will be running these in a marquee at Piccadilly Gardens. These include:

“What option do we have”?

This is such an important moment for so many reasons. We are emerging from an intense public health crisis which we are still trying to navigate, and the effects of which are still being felt. Furlough is ending, Universal Credit is being cut, National Insurance is increasing. The NHS and social care sectors are under significant strain because of privatisation and funding cuts.

Meanwhile, the Government has set in motion seriously worrying legislation that will impact all working class people in the form of the Police, Crime, Courts and Sentencing Bill, the Elections Bill and the Nationality and Borders Bill.

They have an 80 seat majority, so what option do we have other than to oppose them and everything they stand for, in our communities and on the streets? We urge you to come to the National Demonstration at the Tory Party conference, to let them know they will be held to account, that opposition to them is growing – and that, while they hope and work for a divided working class, we will be uniting against them in our thousands.

The past 18 months have been terrible for many people. They’ve also come on top of an already diabolical decade for the poorest people in UK society. All this has been, for the most part, thanks to the Tories. So, it really is time to fight back. And in Manchester, People’s Assembly is leading the charge.