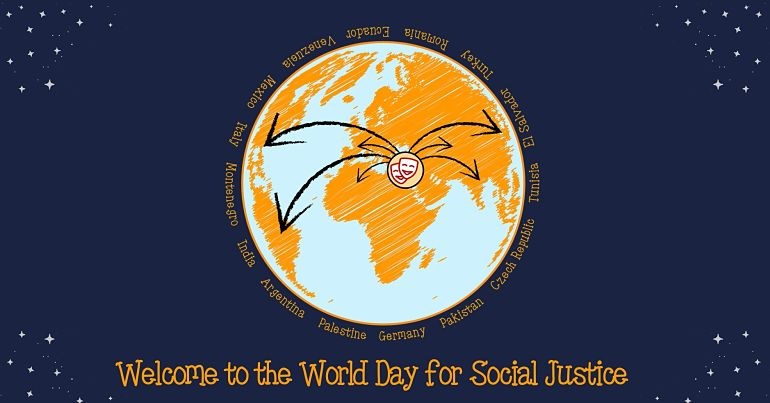 It’s World Day of Social Justice on 20 February, an occasion the United Nations has marked since 2007. This year, a UK charity called the Hands Up Project is making sure that Palestinian children and their global peers take centre stage on the special day.

As The Canary has previously reported, Nick Bilbrough started the Hands Up Project in 2016. It aims to connect “children around the world with young people in Palestine”. The initiative enables these connections through a variety of drama and storytelling activities and sessions. These happen online for the most part, in no small part due to the restrictions Israel imposes on Palestinians.

The Hands Up Project is committed to social justice, global citizenship, and freedom of expression. And so, fittingly, it has recently coordinated a competition that celebrates all those things and will reach its zenith on the World Day of Social Justice.

It partnered groups of two or three Palestinian children with similar numbers of their peers in other countries, along with their teachers, for the 2021 International Lockdown Remote Theatre Competition. In total, the children come from 15 countries, including Palestine, Argentina, Czechia, El Salvador, Germany, India, Mexico, Montenegro, Pakistan, and Venezuela.

Each group has created an approximately five-minute long virtual production of a play. They chose from a published collection of plays written by children in Palestine, called Welcome to Earth and other plays. The Hands Up Project holds a playwriting competition each year and publishes a collection of the entries.

Judges, including this writer, have evaluated the plays based on a range of criteria. These include performance, clarity, and creativity. The Hands Up Project will announce the winners in a special event at 4pm UK time on 20 February.

Bilbrough told The Canary that young people in Palestine are ‘world experts’ in remote theatre. The international competition has “given them the chance to share their skills” and build friendships, he said. For creators of the winning play, those friendships will be further cemented no doubt by the fact that the Hands Up Project is inviting them to come together in person in the UK next summer. They’ll work with a professional director to transform their remote production into one for live theatre. And the project will additionally offer a series of technical training sessions for groups involved in the top three plays.

Bilbrough admits that the level of challenge in the competition was immense, saying:

How do you create powerful theatre when all five actors and both teachers are in seven different locations, and there may be as much as 8 hours time difference between some of the actors?

But he asserted that all of the groups “have risen to this challenge with incredible energy and creativity”.

Palestinian children are, of course, no strangers to challenges. As a recent Amnesty International report made clear, Israel’s apartheid regime “systemically” deprives Palestinians of their rights. Noting the “segregation, dispossession and exclusion” that all Palestinians face, whether “they live in Gaza, East Jerusalem and the rest of the West Bank, or Israel itself”, the human rights group insisted that the international community “has an obligation to act”.

Palestinians have shown incredible resilience through the many decades of Israel’s occupation. Children there are no exception. Indeed, as Israel was intensively bombing Gaza in May 2021, young people involved in the Hands Up Project continued to meet online. They came together for events and sessions to share their stories with people around the world during the assault.

Bilbrough recently witnessed the aftermath of that assault, in his first visit to Gaza since the start of the pandemic. He said “alarming evidence” of that bombing campaign is “everywhere”, in the obliterated buildings, damaged roads, and more. However, he also described the visit as “heartening”, because:

despite the blockade and the ongoing Israeli atrocities committed against them, the young people of Gaza are not giving up and will continue to use remote theatre as their window to the world

Anyone wanting to stand in solidarity with young people from Palestine and elsewhere and listen to their stories on World Day of Social Justice is more than welcome to do so here. As a judge of the final and its phenomenal line-up of plays, this writer cannot recommend enough that everyone does so.

Featured image via the Hands Up Project