Met police: officers being investigated for another child strip search 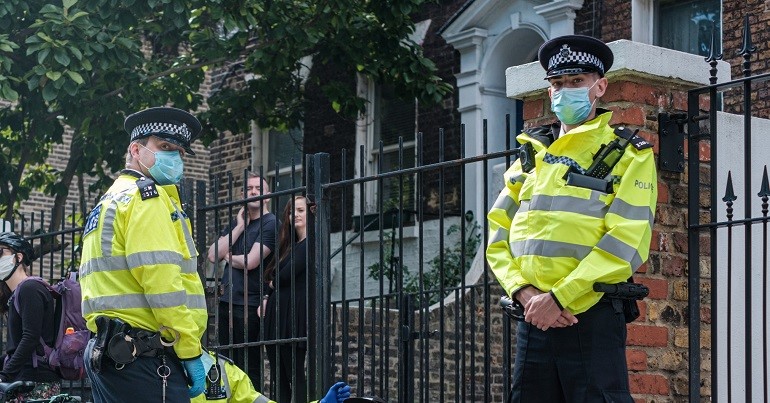 This article includes a recounting of self-harm and discussion of suicide.

The police watchdog is investigating four Met police officers who strip-searched a 15-year-old dual heritage autistic girl. The incident happened in the same month that cops also forcibly strip-searched Child Q. However, these two incidents are characteristic of the Met police’s institutionalised abuse of its power.

Olivia had been out with some friends when they had an argument with two boys, who called the police and alleged they were the victims of an attempted knife-point robbery. She was searched by police at the scene and nothing was discovered. Olivia and her friends were then arrested.

At the time, Lisa was isolating with Covid-19, but says she spoke to the police on the phone and told them about her daughter’s autism and learning difficulties, and warned them she had been self-harming.

Her mum says Olivia handed over a small blade used for self-harming to police. Then, after spending more than 20 hours in custody, she was told she could have a shower.

A sharpened stick – also used for self-harming – fell from her clothing as she changed. Lisa says it was at that point six officers handcuffed Olivia, forcibly stripped her and carried out an intimate search in the presence of male officers.

As the Canary‘s Maryam Jameela previously wrote, the police’s violation of Olivia happened in the same month that officers’ forcibly strip-searched Child Q. She noted that:

It bears repeating that Olivia is a vulnerable child who was in a distressed state. Why the police thought it acceptable to seize her and strip search her is beyond comprehension. Olivia’s mum also said that:

“Olivia was actually on her period at the time too. And they cut off her underwear in front of these grown male officers. She was absolutely distraught”.

In the time since she was strip searched, Olivia has continued to self-harm and has also attempted suicide.

Now, the Independent Office for Police Conduct (IOPC) is investigating the Met police.

BBC News reported that the IOPC told it:

We can confirm that four Metropolitan Police Service (MPS) officers have been served misconduct notices as part of our ongoing investigation,” the spokesperson said.

A police sergeant and three police constables have been served notices in relation to the arrest and detention of the child, who was strip-searched by MPS officers.

However, the IOPC also noted:

The serving of misconduct notices does not necessarily mean disciplinary proceedings will follow. Due to the sensitivities surrounding this matter, we cannot provide any further information at this time.”

The Met: broken beyond repair

Jameela wrote how police forces, notably the Met police, have an institutionalised problem with the abuse of, and prejudice against, autistic people. Then, she noted how the police are also institutionally racist, too. Magazine the Justice Gap noted that between 2017-2021 police have strip searched approximately 50 children a week. It also noted that the BBC said:

two-thirds of children who had been strip searched by the Met over the past three years were from ethnically diverse backgrounds… 78 girls were strip-searched in London police stations last year – 32 were black or mixed race.

All this comes as former Met police officer David Carrick admitted to dozens of rapes and sexual assaults – underscoring that that the force is also institutionally misogynistic and violent against women. As Jameela previously wrote:

We can’t rely on the police investigating themselves – we have to rely on each other. It’s now more important than ever to observe the police in public.

With forces like the Met broken beyond repair the calls for government defunding of the police will likely grow louder. However, it would be easy to forget that actually, police forces are operating how the state intends them to – with structural violence, and institutional racism and misogyny all crucial for the functioning of the corporate capitalist system. It’s all to easy to forget this, and the actual horror of police abuses of power, when their crimes are institutionalised to such an extent. For the survivors of police violence, there is no forgetting, though – therefore, nor must anyone else.