The whole world is watching Turkey, and here's why - The Canary 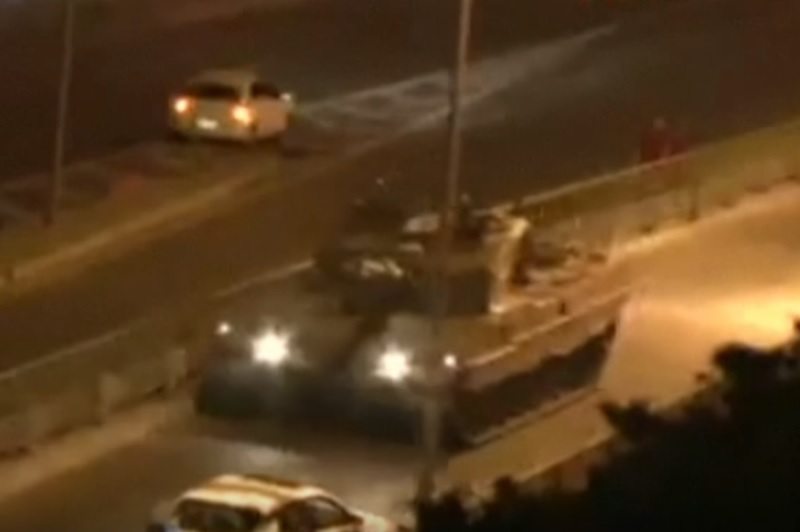 On 15 July, a section of the Turkish army – the second biggest in NATO – launched a coup against its own government. There were protests and shootouts in both Ankara and Istanbul for hours before the coup seemed to falter, and at least 265 people are thought to have been killed and almost 1,500 injured. But why did this happen in the first place?

A coup to restore democracy and peace?

In the evening of 15 July, tanks surrounded Turkey’s parliament in Ankara and blocked flights in and out of Istanbul’s main Ataturk Airport. The chief of Turkey’s military staff was taken hostage in Ankara, and a statement released by media outlets said that the military had taken control in Turkey:

to reinstall the constitutional order, democracy, human rights and freedoms, to ensure that the rule of law once again reigns in the country

It claimed that a “peace council” now ran the country and asked people to stay off the streets.

According to a European Union source monitoring the events, the coup was “relatively well orchestrated… by a substantial body of the military”. The organisation of the coup plotters would later be questioned, however, as the attempt began to fail.

Turkey’s increasingly authoritarian president Recep Tayyip Erdoğan – who has been accused of undermining the country’s traditional separation between religion and politics – soon called on his supporters to hit the streets and resist the coup. In a desperate move, he told CNN Turk (via the FaceTime app):

There is no power higher than the power of the people… Let them do what they will at public squares and airports.

This defiant message was ironic given the fact that his own regime has consistently repressed street protests, but it saw his loyal supporters flood out into the streets, where they were allegedly fired upon by dissident soldiers. Pro-regime military forces resisted the coup too, with F-16 fighter jets soon shooting down a helicopter and bombing tanks stationed outside the presidential palace in Ankara.

Who organised the coup?

The Turkish state is notorious for releasing misleading information, so it’s difficult to know exactly who was behind the coup at the moment of writing. But government ministers were quick to accuse Fethullah Gülen, a Muslim preacher and advocate of intercultural dialogue, of orchestrating the coup. Once an ally of the ruling AKP regime, Gülen fell out of grace with the party in 2013. After this, his supporters were persecuted and sympathetic media outlets were taken over. In fact, just this week criminal charges against them have been stepped up. In short, they certainly have motives for opposing Erdoğan’s government.

Gülen himself, however, responded by saying:

As someone who suffered under multiple military coups during the past five decades, it is especially insulting to be accused of having any link to such an attempt. I categorically deny such accusations… I condemn, in the strongest terms, the attempted military coup in Turkey.

The Alliance for Shared Values – a US-based organisation linked to Gülen, also condemned the coup, calling the accusations made by pro-Erdoğan circles “highly irresponsible”.

Another possible group behind the coup would be a secularist section of the army – which has long seen itself as the defender of Turkey’s secular principles – which has decided to act against Erdoğan’s attempts to blur the lines between religion and politics.

The intelligence agencies of western governments may also have had some input, given their history of interfering in foreign political processes. While leaders quickly expressed their support for Erdoğan’s regime during the coup, relations within NATO have been increasingly rocky in recent months. And with Ankara angry about the USA’s temporary support for secular Kurdish-led militias in northern Syria, the AKP has recently moved to make deals with both Russia and Syria – governments it had previously opposed – in an attempt to stem Kurdish influence. Western analysts have previously suggested that maintaining an alliance with Turkey was “getting harder and harder to justify” and that, if a coup did take place, western leaders “might offer lip service against a coup, but they would work with the new regime”.

Does Erdoğan deserve to be in power?

Erdoğan has many critics, and with good reason. When Daesh (Isis/Isil) massacred 34 left-wing activists on 20 July 2015 – just a month after elections in which the ruling AKP had performed badly, the regime waged war not on Daesh but on Turkey’s progressive Kurdish communities instead. The opposition of these areas to Erdoğan’s policies led him to destroy promising peace negotiations with left-wing Kurdish rebels in order to court the votes of Turkish fascists and pro-jihadi extremists, all in the hope of consolidating his own power.

The Erdoğan regime has since manipulated and suppressed the media to hide the reality of military curfews in Kurdish communities – which are thought to have killed many hundreds of civilians. (The Canary has covered the war crimes and destruction in just two of these areas – Cizre and Nusaybin.) The government has also been accused on numerous occasions of serving as a “mediator and ally” for Daesh and other jihadis in Syria, either directly or indirectly.

But Erdoğan’s hard-line regime has massive support from ethnic and religious chauvinists in Turkey – who either hate secularism, Kurds, or both. Any coup attempt against it would therefore face significant popular resistance – as seen after the 15 July coup attempt. And for this reason, Erdoğan has actually welcomed the plot, calling the coup “God’s gift to us, because we can clean the army” (i.e. purge it of his opponents).

If opposition parties were seen supporting such a coup, they would probably be repressed even more than they already have been. For this reason, both right-wing and left-wing parties in Turkey were quick to condemn the coup against Erdoğan. And many have praised this stance, with one Twitter user saying:

Think of the bravery of Turkish dissidents, journalists, politicians & citizens opposing a coup that's trying to remove a govt they despise.

Turkey’s a mess, but a coup will only make matters worse

In spite of all the justifiable criticisms of Erdoğan and his repressive, chauvinist and anti-democratic regime, military rule is not the answer. Even if it fostered a free media, for example, it would not change the fact that millions of Turks support the AKP.

What Turkey needs is reconciliation between the incredibly polarised sections of its society, and the silencing of one large section of society would not achieve that.

In other words, Erdoğan must not be given an excuse to repress citizens even more than he already has. Instead, his supposed respect for the ‘power of the people’ must be exposed for the hypocritical propaganda that it is. And when citizens are finally ready to unite against him and other figures who seek to divide them along ethnic or religious lines, they can take power legitimately by peaceful, democratic means. That is the only kind of coup that would truly bring reconciliation to Turkey.

UPDATE: With the failure of the coup attempt on 16 July, Erdoğan’s regime suspended almost 3,000 judges from the Supreme Board of Judges and Prosecutors (HSYK). Around 3,000 soldiers, meanwhile, including high-ranking officers, were arrested – amid allegations of torture. For Harvard economist Dani Rodrik, the failed coup would now “clear the way for total domination of Turkish politics by Erdogan”. The world must keep its eyes on Turkey.