The truth about Trident: the shocking fact that would turn us all against paying for nukes - Canary 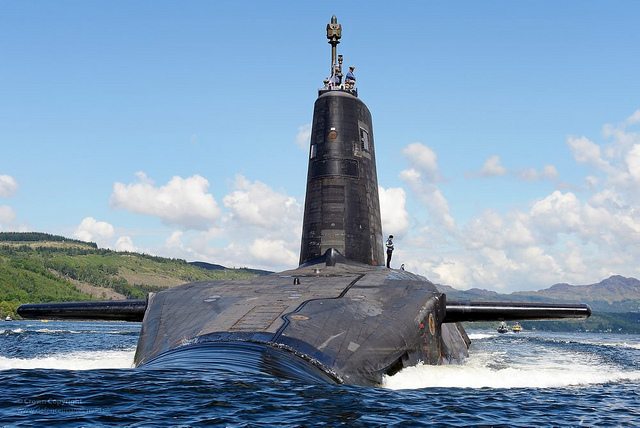 As parliament debates the renewal of Trident, the UK’s “nuclear deterrent” – the arguments surrounding the controversial weapons system rage as fiercely as ever. But there’s one aspect which has been repeatedly overlooked. UK banks not only finance our nuclear deterrent, but also our supposed “enemy” Russia’s as well, and senior politicians enjoy a direct financial profit through keeping Trident.

The name Trident refers to the nuclear missiles that are carried on four Vanguard-Class submarines. Based out of Faslane, on the Clyde in Scotland, at any one time, there is one submarine on active patrol, another in service, another preparing to patrol and a final one on exercise.

Each submarine can carry 16 Trident missiles (but since 2010 this has been reduced to eight), and each missile can hold 40 warheads.

The cost of replacing the Trident system with “Successor” (which is what the parliamentary debate on Monday is about) is disputed. The official Ministry of Defence (MoD) line is £41 bn per submarine. The Campaign for Nuclear Disarmament (CND) says the true cost is around £205 bn for all four, when you included the cost of their upkeep.

The mainstream arguments for and against Trident are fairly clear cut.

Those in favour, like deputy Labour leader Tom Watson, argue that nearly 30,000 jobs rely on Trident. They also say that for security purposes we need nuclear weapons, as a deterrent against Russian aggression, and to ensure the UK’s standing in the world.

Those against, like CND, argue that the use of Trident would be illegal under international law, that the cost of replacing it is too great, and that it doesn’t reflect our current security threats, like terrorism and cyber attack (threats the government identified itself as those of the biggest concern in the 21st century).

However, there are two arguments that both sides fail to acknowledge – maybe because if they did, it would bring the whole military industry into question. The role of multinational banks and senior UK politicians.

All aboard the Westminster gravy train

The main companies involved in Trident are US multinational Lockheed Martin (who produce the missiles), BAE Systems, Babcock & Wilcox and Rolls-Royce – who are involved in the Successor programme – and also names like Bechtel, Honeywell, Raytheon and Serco who are contracted or subcontracted in relation to the current Trident system.

According to the House of Lords register of interests, around 15% of sitting members are directors of, or shareholders in, companies that are either directly contracted to the Trident programme or invest in it.

Prominent names include Lord Hollick, a Labour Peer who is a director of Honeywell. Lord (William) Hague, chair of the Royal United Services Institute (RUSI). RUSI, who are supposedly impartial US and UK government defence advisors, are sponsored by Babcock, Lockheed Martin, Raytheon and Rolls-Royce.

But one of the most telling individuals is Labour’s Lord Hutton, defence secretary under Gordon Brown. He is an adviser to Bechtel, consultant for Lockheed Martin and chair of the Nuclear Industries Association (NIA). The revolving door (the phrase used to describe MP’s who, once finished in parliament, go into jobs related to their previous role) has never spun so quickly.

It may be no wonder then, that the majority of parliament (excluding the SNP and the Green party) are supportive of renewing Trident.

With reference to the role of multinational financial institutions, all the companies listed above, aside from being involved in Trident, share one other common denominator. They are all financed, or owned, by UK banks. Specifically Barclays and HSBC. A report by Don’t Bank on the Bomb details the involvement of major financial institutions in the western nuclear weapons industry.

What this report doesn’t cover, however, is these institutions involvement in Russia’s nuclear weapons industry.

Aside from financing state-owned Russian companies like Rostec State Corporation (heavily involved with the country’s military) via their funding of, and credit trading with, Rostec financiers Novikombank, these banks have directly financed the Trident equivalent in Russia.

The Dolgorukiy class submarine programme is Putin’s very own Trident. Made by a company called Sevmash, it’s financed by the state-owned Vnesheconombank (VEB) development bank. In turn, VEB bank is financed by a consortium of international banks. These include, of course, Barclays and HSBC.

Essentially, UK multinational banks are playing one big game of “Battleships”, funding both UK and Russian nuclear weapons programmes. Except no missiles will ever be fired, and a winner will never be declared – because that would be unprofitable.

But the most shocking aspect of this is one financial institution so far not mentioned: the Royal Bank of Scotland (RBS).

RBS are also financiers of the VEB bank who fund Russia’s nuclear submarines – and they also invest or part-own seven companies directly contracted to Trident. What is most deplorable about this is the fact that RBS is, of course, state-owned –  we bought a 79% majority stake after the 2008 financial crash.

In layman’s terms? We, the public, pay for Trident directly via taxation. We also paid for RBS, directly through taxation. In turn, RBS directly fund (with UK taxpayer money) our “enemy’s” nuclear weapon systems.

Essentially, the UK taxpayer is paying for both sides in this perceived nuclear stand-off.

The whole nuclear weapons industry – every disturbed, finger-pointed warning about Russia, every argument about our “national security” – is one mammoth ruse.

We, the taxpayer, are duped into allowing complicit Governments to squander our money on an imaginary threat, which merely serves to make former MPs richer and multinational banks and their wealthy shareholders more money.

The most dangerous enemy facing us in 2016? The lies we are told, under the premise of a threat which doesn’t actually exist.

Contact your MP if you disagree with the Trident nuclear “deterrent”.