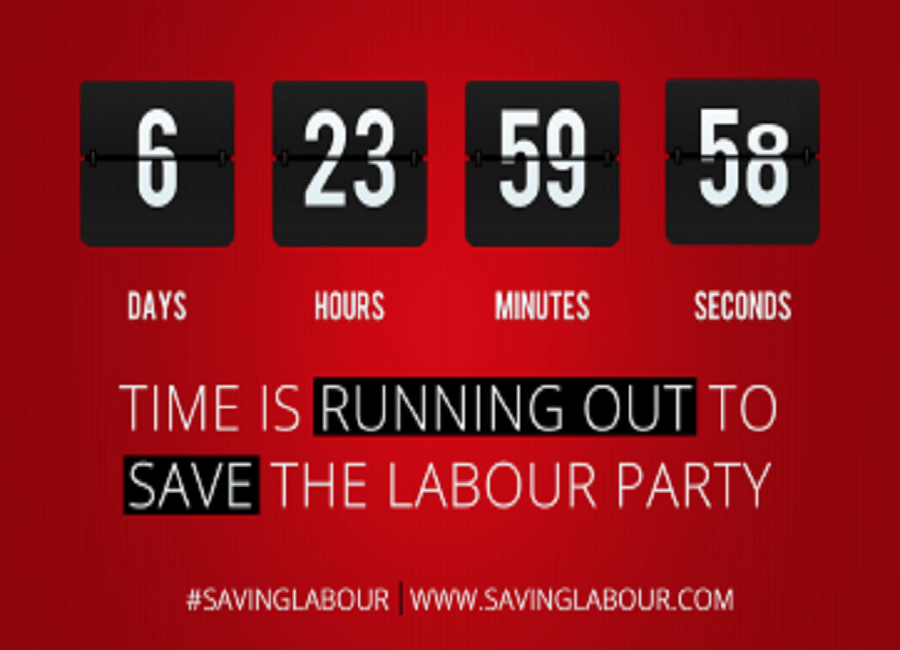 In what appears to be possible illegal activity, the Labour party faction Progress have been found to be using people’s personal details without their permission – in what may well be a breach of the Data Protection Act (DPA).

The organisation, who consider themselves “moderates”, are best known for their association with Tony Blair’s government. They have been frantically trying to recruit new members to sign up during the registered supporter window of 18-20 July, in a bid to ensure Jeremy Corbyn does not win the Labour leadership contest.

But in emails leaked to The Canary, it appears they have been actively encouraging their members to access the personal details of possibly thousands of former Labour members –  via the “Saving Labour” website.

The first email is from the director of Progress, Richard Angell and was sent on 13 July. It is a news update, covering various topics – but the first one is promoting Saving Labour. It says:

We need your help to recruit your friends and family who believe that by the strength of our common endeavour we achieve more together than we do alone and that Britain deserves better than this Tory government.

It continues by saying that:

Set yourself a target of 10 or more people to join Labour. This weekend we are going to be coordinating street stalls and phonebanks to aid this effort. Find out more here. Help change the future of the party, and of the country.

It links to this separate PDF document on Saving Labour’s MailChimp server: 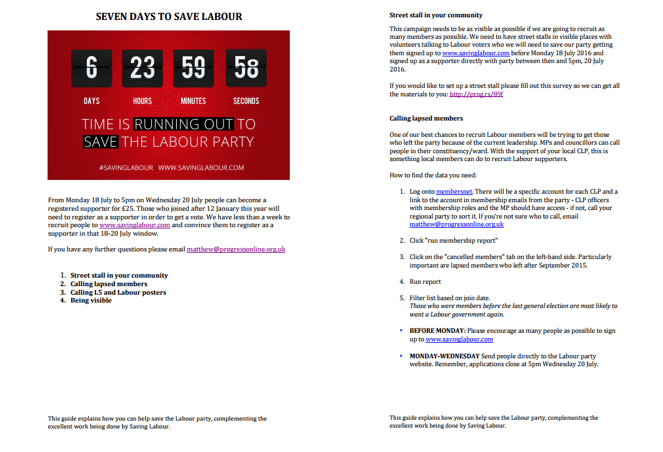 It details ways in which supporters of Saving Labour can “recruit” lapsed members and get them to become registered supporters during the 18-20 July window.

However, this is where the possible breach of the DPA occurs.

Saving Labour are specifically telling their supporters to get their local MP, councillor or constituency Labour party officers with membership roles to “support” them in getting lapsed members to sign up to www.savinglabour.com before the membership window opens on Monday. Essentially, it is suggesting that Saving Labour supporters ask those who have access, to pass them the personal details of former Labour members.

As Tim Turner, a specialist in Freedom of Information and Data Protection, comments on a blog post:

If Saving Labour (or rogue individuals) are attempting to recruit Labour members back into Labour, then the processing of data is likely to be a breach of Data Protection’s fairness requirements. If Saving Labour are trying to recruit members to Saving Labour’s mailing list or retaining data for its purposes, it’s potentially a lot worse.

However, there are two stronger arguments relating to why Progress and Saving Labour may have broken the law.

Firstly, there is the question of whether lapsed members gave their permission for their personal data to be used. Turner thinks:

it’s exceptionally unlikely that Labour would have told members that their data would be processed after their membership had lapsed. Regardless of whether Saving Labour receive the data, processing it after the membership has lapsed is likely to breach the First principle unless Labour can demonstrate that members were told explicitly.

Turner also notes that even if the Labour party had given permission to use lapsed members data, it would require Saving Labour to have a contract with the party. If they don’t, this is another breach of the DPA.

But they also may have contravened a further law. Saving Labour encourages MPs, councillors and its supporters to “call” lapsed members and get them to sign up to the Saving Labour website before Monday’s official recruitment window.

The laws surrounding data protection make it clear that any political campaigns are classed as “marketing”. Therefore, the people conducting the campaign have to check as to whether the individuals they’re targeting have opted out of cold calls with the Telephone Preference Service (TPS). Furthermore, if Saving Labour are sending emails or texts to lapsed members they would have to have the individual’s permission.

Both these examples would, if the permission of individuals was not given, breach the Privacy and Electronic Communications Regulations (PECR).

It’s extremely hard to imagine that any consent given to the Labour Party could survive a lapsed membership, and Saving Labour would not have that consent in the first place.

All this information has been passed to the Information Commissioner’s Office (ICO) for investigation.

People have been taking to Twitter to say they have received unauthorised emails:

I got email too and have no idea how they got my details.

There have also been allegations on Twitter that Momentum have been sending unsolicited emails:

The Canary are also looking into this.

The outcome of the ICO investigation has to be waited for, as they will be the ones, ultimately, who will decide if any laws have been broken. What these events do tell us is that, in what is becoming an embattled and divisive campaign on all sides of the Labour leadership race, people are getting desperate.

The question has to be asked of Progress: if Momentum had or have been doing the same thing – what would your reaction be? Because this is, in essence, wholly unethical.

Given the anti-democratic actions taken by the anti-Corbyn elements of the Labour party to date, the onus is on them to demonstrate a willingness to act democratically and with integrity. Sadly, no such demonstrations are being made right now. One has to ask: if this is how these representatives behave in opposition, how on earth could voters count on their integrity in office?