This Labour leadership contender just lost their cool, and it was incredibly revealing (VIDEO) - The Canary 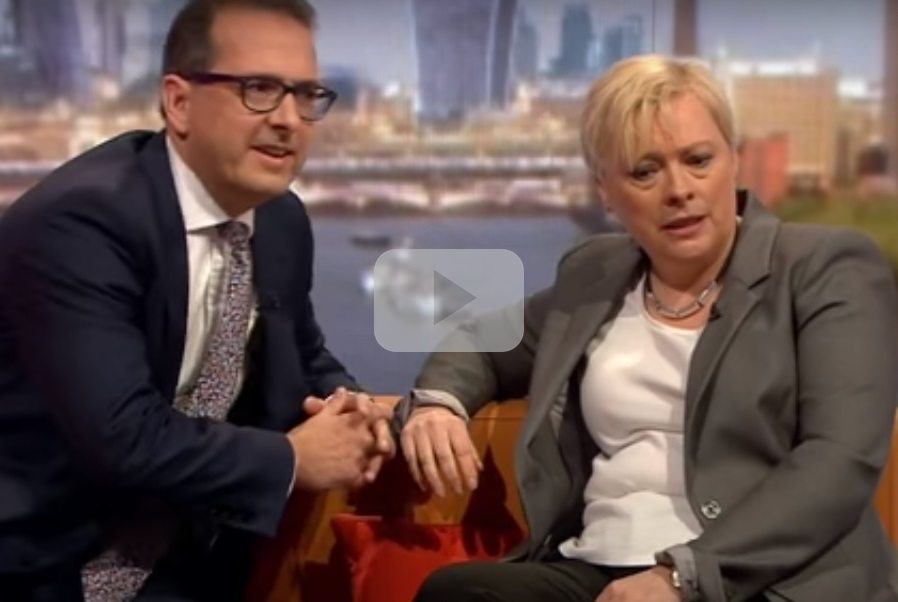 The two MPs aiming to defeat Labour leader Jeremy Corbyn in the party’s upcoming leadership elections have hit the media in recent days, attempting to show the UK why they deserve to replace him. But on 17 July, one of these leadership hopefuls appeared to lose their cool when asked if one of them needed to drop out of the race.

Speaking on the BBC’s Andrew Marr Show, Angela Eagle and Owen Smith were explaining why they weren’t yet ready to drop out of the battle with Corbyn in order to have a single candidate uniting all those opposed to the current Labour leader. When Smith said “we can make an agreement between ourselves”, Eagle laid her feelings hilariously bare – clearly unhappy about her contender even suggesting the prospect of a negotiation.

The inability to agree with each other is precisely why the party is where it is at the moment, having suffered a torrid few weeks as a result of a parliamentary coup against Labour’s democratically elected leader – which saw a carefully coordinated series of resignations, public statements and PR stunts. And while Smith and Eagle treated each other much better on The Andrew Marr Show than they have treated Corbyn since the coup, they clearly weren’t prepared to do a deal with each other in the interest of unifying opposition to the Labour leader.

Smith clearly wants to portray himself as someone who can save the Labour party from its current parliamentary crisis. But the truth is that he was a key player in the coup launched by Labour MPs against Corbyn.

At the same time, while he claims his plans for Britain are “radical”, he has clear corporate links and told Marr:

Personally, I’m going to argue today that austerity is right

He has also questioned the democratic mandate of the recent EU referendum, saying:

I don’t think we should accept that we’re on a definite path out.

And while there is clearly hunger among many Brits for justice against politicians who lied and manipulated voters in the run-up to the referendum, Smith’s promise to have another referendum is one that he almost certainly wouldn’t be able to keep. Additionally, a recent poll has suggested that 57% of Brits are opposed to a second referendum.

Eagle is the MP who doesn’t seem interested in the fact that her own constituency members don’t support her (which is not much of a surprise given how she gained her constituency thanks to the purge of a popular left-wing Labour candidate). She also shares Smith’s thoughts on the EU referendum (Corbyn believes the vote should be respected, even though he campaigned vigorously for the Remain camp). And she appears to have turned the slander of Corbyn supporters into an art form.

She also continues to defend her decision to abstain on the first stages of the Tory Welfare Reform Bill in 2015. Responding to the insistence that Corbyn voted against this package of destructive cuts, she said:

that’s what he’s done all his life.

The prospect of a second Corbyn victory

Trying to get a different kind of citizen to vote in the leadership election, Labour’s National Executive Committee (NEC) has decided to allow non-members to register to vote in the leadership elections – if they pay £25 for the privilege, that is – and that members who have joined in the last six months won’t automatically be eligible to vote Labour. If this is aimed at tipping the balance of opinion in the vote against Corbyn, we can also count on the mainstream media doing their part by keeping up its anti-Corbyn bias.

Nonetheless, there’s every possibility that Corbyn will win the leadership elections for a second time. And the response of both Eagle and Smith on 17 July when Marr asked them whether they’d accept a new mandate for Corbyn betrayed how nervous they are about the prospect. Their uncomfortable body language, combined with their reluctance to give an immediate answer, seemed to show just how aware they are that this may be their fate in several weeks’ time.

Smith eventually said (rather reluctantly) that he’d “serve and work with Jeremy if he wins”. And that may well be exactly what he and other Labour MPs will have to do when the results come in if they don’t want to see their party fall even deeper into crisis.

See more from The Canary on Jeremy Corbyn, Angela Eagle, and Owen Smith.

Sign the campaign to allow all full Labour members to vote in the leadership election.