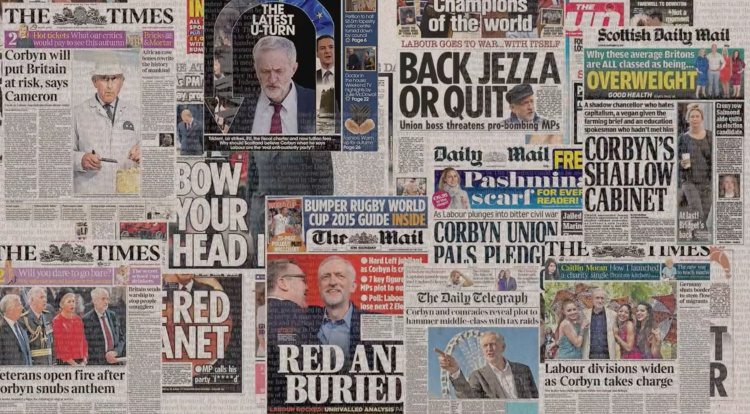 A new report, published by the London School of Economics and Political Science, has confirmed the media’s bias against Jeremy Corbyn, claiming the press have turned into an “attackdog” against the opposition leader.  It also illustrates how Labour politicians, who have been plotting against Corbyn, have been corrupting the media, long before the current coup.

Entitled “Journalistic Representations of Jeremy Corbyn in the Mainstream Press: From Watchdog to Attackdog”, the scathing report from the Media and Communications Department at LSE, heavily criticises the way Corbyn has been treated in the mainstream press.

The study analyses articles that were published in eight national newspapers between 1 September and 1 November 2015, and included both right and left wing press. It found three areas where Corbyn has not been treated fairly:

According to the report, 56% of the articles analysed about Corbyn do not give Corbyn a voice at all. The media is also criticised for giving a more prominent voice to Labour opponents of Corbyn. This is particularly relevant given this analysis was carried out before the current leadership coup. The report reveals:

In many newspapers the voice of Labour sources that are against Corbyn outweigh those that are supporting him. This is especially the case in The Independent, The Daily Telegraph and The Daily Express, but also in the left wing tabloid The Daily Mirror.

When Corbyn is given a voice, it is often distorted. An example is given of a speech he made about the commemoration of the First World War, with the reports saying he believed it was “pointless” and was “questioning” the events. However, this is the  quote, which wasn’t used:

[…] apparently next year the government is proposing to spend shed loads of money commemorating the First World War. I’m not sure what there is to commemorate about the First World War other than the mass slaughter of millions of young men and women, mainly men, on the Western Front and all the other places. […] it was a war of the declining empires.

The LSE report is forthright in criticising this misrepresentation:

Allowing an important and legitimate political actor, i.e. the leader of the main opposition party, to develop their own narrative and have a voice in the public space is paramount in a democracy. Denying such an important political actor a voice or distorting his views and ideas through the exercise of mediated power is highly problematic.

This is also something The Canary has addressed more recently. During the Brexit debates, far from being silent, Corbyn found it difficult to have his voice represented in the mainstream media. He stated that his supposed “silence” was:

partly down to the media and how they report.

Furthermore, the report found that 30% of content about Corbyn included mocking him both politically, and in appearance. And whilst, unsurprisingly, the right wing press do this far more than left, it is noted that:

He is often portrayed as a clown-like figure, mocked as the ‘Jezster’ or derisively dismissed as the comic political equivalent of the child-like TV sitcom character Mr. Bean with tabloid media repeatedly referring to him as ‘Mr. Corbean’. It is noteworthy here, however, that The Daily Mirror to a certain degree also ridiculed Corbyn. For example, Paul Routledge called ‘Jezza’s’ reluctance to use nuclear weapons ‘naïve’.

A more recent example of this sneering derisive tone can be found in this article in The Daily Telegraph. This nonsensical piece of “journalism” claims that:

The overgrown state of Jeremy Corbyn’s rambling front garden resembles the man himself.

Finally, the report examines “delegitimisation through association”, claiming that:

many journalists and commentators describe the Labour leader and his political ideas as ‘loony’, ‘unrealistic’, or ‘outdated’. Right wing newspapers, such as The Daily Telegraph, and tabloids like The Daily Express and The Sun, emphasised the supposed ‘radicalism’ and ‘insane’ nature of his political proposals. Besides describing left wing ideas as loony, they are also seen as unrealistic and highly unlikely to deliver an election victory to Labour, something the left wing and liberal newspapers also picks up on.

Additionally, it looks at the repeated mainstream media claims that Corbyn is a “friend” of the IRA, Hamas and Hezbollah, and how Corbyn is labelled as “dangerous”. As this table shows, many of those criticising Corbyn as dangerous are other Labour MPs: 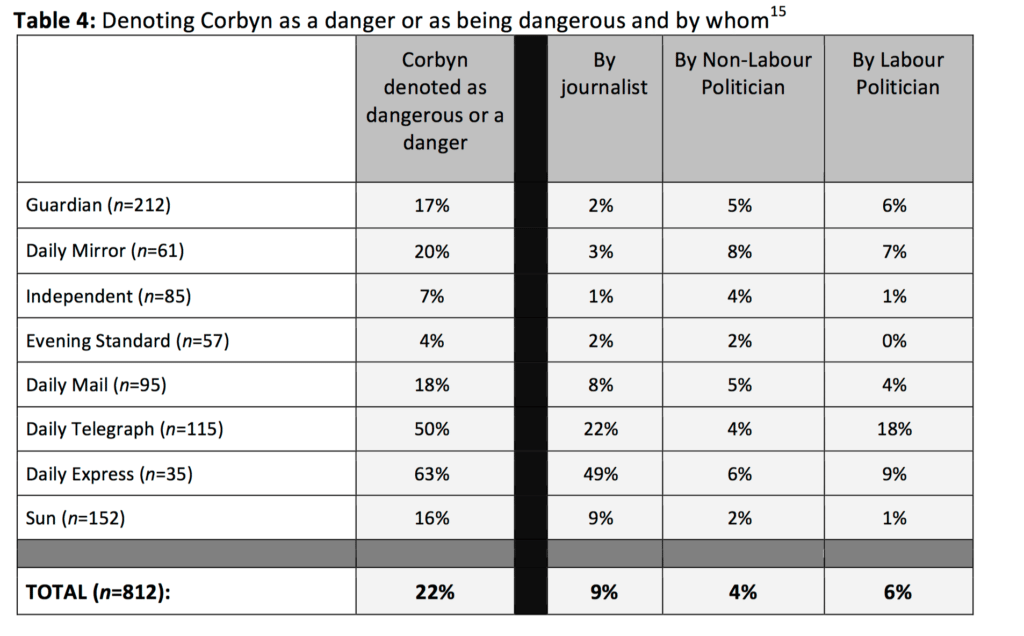 This can be seen as a clear example of how Labour politicians have been trying to portray an anti-Corbyn narrative long before the current coup. As the report states:

As Table 4 clearly demonstrates, however, the danger frame was (and arguable still is) also being pushed by Labour politicians and by journalists. Denoting Corbyn as a danger or dangerous by politicians of the Labour Party is yet another indication of the civil war being waged within the Labour Party, something which could be observed throughout the corpus. Linked to this is also the ongoing frame of persistent references to possible and potential coup attempts against Corbyn.

The LSE is categorical in their condemnation of the reporting:

To conclude, the degree of viciousness and antagonism with which the majority of the British newspapers have treated Corbyn is deemed to be highly problematic from a democratic perspective.

This report is limited to newspapers over a relatively short time span. However, it is not limited to the print media. As previously shown in The Canary, the BBC has been criticised for their bias and for attacking Jeremy Corbyn. Even Channel 4 have been shown to exaggerate the threat posed by Corbyn’s supporters.

As the Labour coup moves into its next stage, and the attacks on democracy by the Labour’s National Executive Committee get deeper by the day, this report serves as a timely reminder of the complicity of the mainstream media and Labour politicians in this coup.

The problem for Corbyn is – repeat something enough times, and people start believing it. Countless conversations and social media posts repeat the mantra that he is “not a strong leader” or is “un-electable” without reviewing the facts.
This needs to be challenged and it shows why alternative media outlets are so vital.