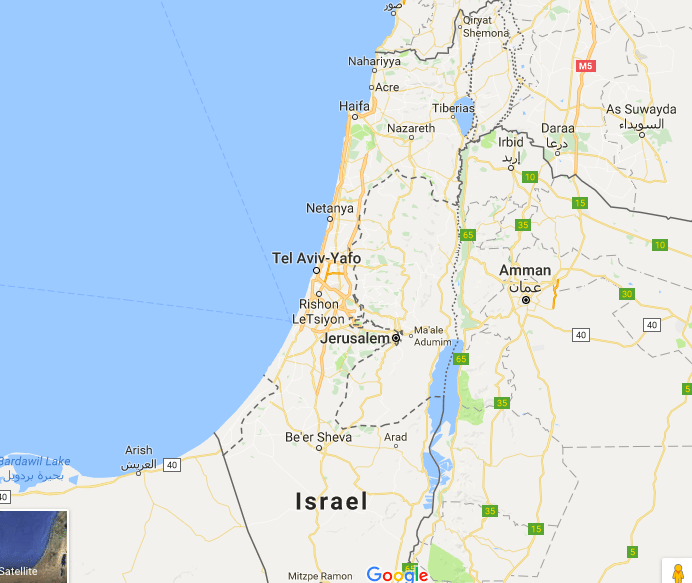 Google Maps made a decision to remove the country of Palestine from its map application on 25 July 2016, and it has received increasing and widespread condemnation.

It seems that Google Maps has renamed the entire geographical region that spans Israel, East Jerusalem, the West Bank and Gaza, as ‘Israel’, while a broken line demarcates the Palestinian territories.

I thought it was just a rumour, but it's true; no more Palestine on Google Maps! ..'Digital Fascism' no less!! pic.twitter.com/QWjeuVDxty

The Palestinian Journalists’ Forum denounced Google for the change, which took place on 25 July 2016.

The group said in a statement that it was:

part of the Israeli scheme to establish its name as a legitimate state for generations to come and abolish Palestine once and for all. The move is also designed to falsify history, geography as well as the Palestinian people’s right to their homeland, and a failed attempt to tamper with the memory of Palestinians and Arabs as well as the world.

If you search for Palestine on Google Maps you will be taken to the mentioned region of Gaza and the West Bank, two separate enclaves with Israel in between. The two enclaves along with East Jerusalem make up the occupied Palestinian territories as per UN Resolution 181 in 1948. But officially, Israel only recognises Gaza, the tiny strip of land in the south, as ‘Palestine’.

East Jerusalem was annexed by Israel in 1967 after the Six Day War, but was never recognised by the international community. The West Bank and Gaza were also occupied during the war, but troops withdrew from Gaza in 2005. But as it has been under a crippling blockade and has no control of its own borders, it is still considered as an occupied territory by many states and observers, including the US.

The occupied West Bank is also increasingly being co-opted by Israel through the illegal building of settlements and the encroachment on the land by a ‘security’ wall.

The Google Maps decision to remove ‘Palestine’ is, therefore, overtly political, and a step back from its previous decision in 2013. That year, Google made a lauded decision to change the tagline from ‘Palestinian territories’ to ‘Palestine’ after the UN recognised Palestine as an observer state in November 2012.

The removal of Palestine is now causing outrage and there are calls online to restore the name ‘Palestine’ to Google’s maps through a change.org petition.

Organisers of the petition say:

This is an important issue, as Google Maps are now regarded as definitive by people around the world, including journalists, students and others carrying out research into the Israel-Palestine situation.

Whether intentionally or otherwise, Google is making itself complicit in the Israeli government’s ethnic cleansing of Palestine.

Google has not responded to the Palestinian Journalist Forum’s statement, or to calls to return the name to its maps. However, it has previously noted of its borders policy that it tries to go with local norms and deal with ‘disputed’ regions and territories ‘objectively’.

It seems from the online response that observers are struggling to understand the ‘objectivity’ involved in unilaterally deciding to wipe a nation off the map.

Sign the petition to restore the name ‘Palestine’ to Google Maps.

Support the global campaign calling for strategic Boycott Divestment and Sanctions (BDS) against the actions of Israel that contravene international law.