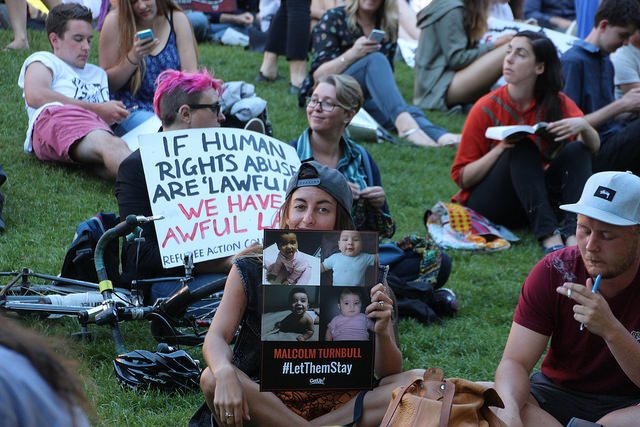 The Australian government is currently in the midst of a crisis as a result of its abusive treatment of asylum seekers. There are a number of solutions to this problem, but Canberra is refusing to budge. And the longer it refuses to act, the worse the situation will get.

A weaker and weaker position

On 22 August, the Papua New Guinea (PNG) Supreme Court confirmed that the PNG and Australian governments are jointly responsible for complying with an earlier ruling that the Manus Island refugee detention camp should be closed and that the imprisonment of the refugees there is illegal. This ruling allows lawyers representing the refugees to pursue enforcement applications for their immediate release and return to Australia, as well as financial compensation for their ordeal.

This is good news for refugees, but it leaves the Australian government without a clue as to what it should do next. Going by its past record, though, it’s likely that it will either refuse to abide by the PNG ruling or make arrangements to move the refugees to Christmas Island until a further solution can be found.

In other words, no change in policy (as to do so would mean losing face).

Neither the government nor its Labor opposition have proven themselves able to solve this problem in compliance with human rights requirements. Now, it would seem appropriate for non-governmental or international agencies – which may be more qualified to deal with such a task – to take charge.

There are a number of agencies that could lead on such an initiative. These range from UN agencies to NGOs like Amnesty International. Australian refugee or human rights agencies, along with professional associations such as the Australian Medical Association, could also help.

But there would only be confidence in the initiative if the following basic conditions were met:

The agencies managing this process would call upon a number of countries around the world to make known their offer of refuge to asylum seekers. Countries approached for offers could be anywhere (including Australian states which have also offered places).

It would be the task of the agencies running the initiative to match those offers to the needs and wishes of the asylum seekers.

This is a viable solution to the ongoing impasse.

If the Australian government refuses to move forward in this way, it will inevitably face prosecution on a variety of charges at some stage – including ‘crimes against humanity‘ in the International Criminal Court or via the principle of universal jurisdiction.

There is a solution to the crisis currently unfolding in Australia. But as long as Canberra refuses to change its current policies, the crisis will just keep getting worse.

– For more details on the legal aspects of this case, see the full investigation by the author on his blog.