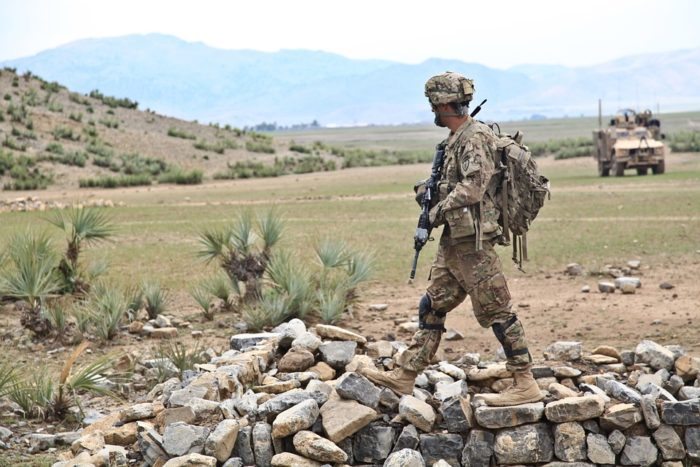 The long-lasting repercussions of the wars in Iraq and Afghanistan are evidenced by the tragic mental deterioration of British soldiers who fought in them. Analysis published by The Independent has just revealed that the number of serving and ex-forces personnel being awarded compensation for mental disorders has risen by 379% over a six-year period, reaching a record high. The number of claims has also risen by 35% in the last year.

The nature and extent of the problem

Post-traumatic stress disorder (PTSD) is one of the most serious mental disorders that can afflict a soldier of war. It’s a disorder in which a traumatic event can set off disturbing reactions (i.e. flashbacks), disrupting a sufferer’s everyday life.

At the same time, Dr Walter Busuttil, director of medical services at the charity Combat Stress, highlights that there are often different, but equally unpleasant, mental health outcomes for veterans:

It’s not just PTSD. The biggest problem from Iraq and Afghanistan is a very high rate of alcohol misuse, and then there are common mental illnesses – a bit of depression, a bit of anxiety, a bit of panic.

War has long revealed the way in which the violent events witnessed by those involved continue to plague their lives. Vietnam veterans often returned home and abused heroin (often compounding an existing addiction) in order to numb their inner turmoil.

Previous research published by King’s College London has suggested that PTSD rates among soldiers returning from Iraq or Afghanistan range between 1.3 and 4.8%. (There is an overall prevalence rate of 4% in the general population.) While this may not appear alarming at first glance, these figures include many personnel who did not experience combat. Among those involved in combat, PTSD rates are much higher, at 7%.

A government that doesn’t care

Veterans desperate for help and treatment have spoken out against a government that doesn’t seem to care about the mental scars suffered by those who have fought for their country. Dean Upson, an Iraq and Afghanistan veteran with PTSD, said:

They don’t care. The fact that you have fought for your country, done three combat tours, that counts for nothing… The visible injuries that they can’t argue with – the lost limbs – they will pay straight away.

Moreover, as Dr Busutill notes, those who are awarded compensation represent a minority of those traumatised. He says that only 4% of ex-personnel assisted by his charity apply for compensation, pointing out that “stigma is a big thing in the military”.

This also ties in with the broader problem of limited mental health services in the UK. Statistics released by the charity Mind show that 12% of people with mental health problems are stuck on waiting lists for over a year before receiving diagnosis and treatment. So if you’re a veteran from a low-income background and are unable to pay for private treatment, you could be tortuously waiting for professional help. Or you might be put on inappropriate medication by a GP because the wait is too long to see a psychiatrist for diagnosis and prescription.

One of the greatest challenges facing PTSD patients is treatment-resistance. This is when, for whatever reason, sufferers are not susceptible to any form of talking therapy, psychiatric medication, or lifestyle change. But a 2011 study, which evaluated the illegal drug MDMA (‘ecstasy’) as an alternative form of treatment because of its fear-reducing effects, offered promising results. The authors found that:

[A] decrease in Clinician-Administered PTSD Scale scores from baseline was significantly greater for the group that received MDMA than for the placebo group at all three time points after baseline. The rate of clinical response was 10/12 (83%) in the active treatment group versus 2/8 (25%) in the placebo group.

Crucially, this was a study with chronic, treatment-resistant PTSD patients, who had spent years in therapy and on medication. In addition, researchers demonstrated that there were no drug-related adverse reactions or any evidence of harm.

This was a pilot study, and there are several limitations with it (including the small sample size), but some UK researchers are optimistic about the potential therapeutic benefits of MDMA.

The not-for-profit Multidisciplinary Association for Psychedelic Studies (MAPS), which sponsored the study, is aiming to get approval by Health Canada and the US Food and Drug Administration (FDA) to use MDMA in therapy by 2021.

But the UK is a long way from having government-sanctioned MDMA-assisted therapy.

Overall, there are two immediate problems to be tackled. On the one hand, many of those adversely affected by war feel ashamed when seeking help. On the other, when they do seek help, it’s not always an easy process. Solicitor Hilary Meredith, whose law firm represents forces personnel, commented:

I have seen a turn in the Armed Forces Compensation Scheme. When it first started in 2005, far more awards were going through, on an easier basis…Then something happened. A lot of the applications were turned down and had to go to appeal.

We can see that the government has made it more difficult, not easier, for ex-forces personnel to seek compensation for their mental health conditions. When the UK deployed forces to Iraq in 2003, it appears that preparations were not made, and still are not being made, for the mental suffering experienced by personnel returning home.

– Take part in the 22 push up challenge.

– Spread the message of Mission 22 by using the hashtag #Mission22.