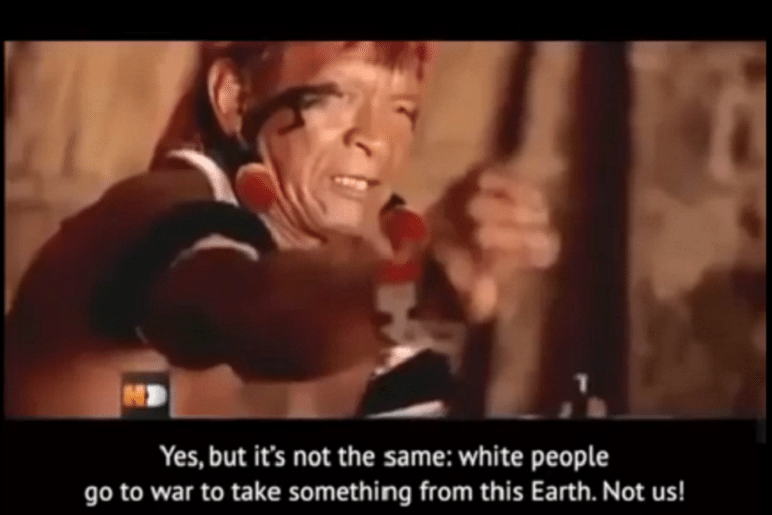 One of the most isolated tribes in the world was shown a five-minute video about life in the Western world. Without stepping one foot in the West, the Brazilian tribe show they understand more about the madness of our corporate-dominated system than its own inhabitants. And their understanding shows how backward the system really is.

The South American tribe was filmed by a French documentary team. In the film, they are shown a series of clips, ranging from pop culture and the environment, to war and terrorism. After each clip, the tribe are asked to comment on what they have just seen against the context of their own lives and culture.

The video addresses some diverse but important issues in the Western world. When shown a video of Western technology and the Moon mission, the tribe is asked, “What’s your reaction to see that a man was able to walk on the Moon?”. A member of the tribe responds:

It worries us. The Moon has been created to be far from Earth so we couldn’t touch it. But why did you go there? What did you try to find over there? What interest do humans have in going there? The Moon is there to shed light upon us during the night. We didn’t have this many eclipses in the past. You probably disturbed her.

The member goes on to link humans’ disruptive behaviour with the onset of climate change. He says:

On our end, we noticed some changes. We’re increasingly warm. We have less fresh air than in the past. With your technology, you’ll kill the Moon.

His insight into the Western world is eye-opening. As is his acknowledgment of global warming. He knows the earth is warming from lived experience, without relying on the Western world’s science and expensive technology.

The tribesmen are then shown clips of warfare, including tanks and bombing raids. When asked to comment, the member states:

When we kill an animal we feel pain. Can you imagine what we feel when we kill a human? Why do you kill? To eat? Unless this is a part of your customs?

When questioned about their wars against other tribes, he responds:

Yes, but it’s not the same. White people go to war to take something from this Earth. Not us.

Many people have already viewed the documentary and shared their views about the tribe’s insights on social media.

While many have highlighted how moving and thought-provoking the clip is, the true response will come after watching the full documentary. The tribesmen highlight some poignant issues that we in the Western world overlook. Given the fact that in just five minutes an isolated tribe can see how destructive and harmful our world is, the need to change is undeniable.

Read more from The Canary about the UK’s arms trade