Germany 70,000, England 1: not the World Cup, but the number of Yazidi refugees welcomed [OPINION] [VIDEOS] - Canary 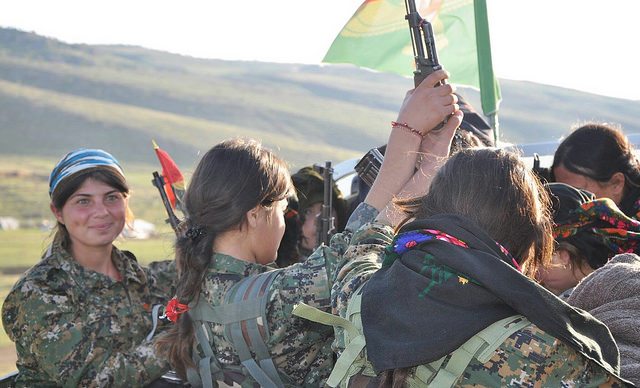 Liberal Democrat leader Tim Farron described Britain on 20 September as “mean” for the attitude it displays to refugees. There are many Britons who would welcome refugees, and Farron was no doubt referring to a certain type of British citizen (either conservative or chauvinist) rather than the population as a whole. He was also, presumably, referring to the government.

Perhaps the meanness of the British government is best illustrated by the number of Yazidi refugees it has welcomed so far. The answer is one, while Germany has embraced around 70,000. If there was a World Cup stakes in humanitarianism, right now Britain would be at the very bottom, and Germany would win hands down.

The plight of Yazidi refugees

The Yazidi religious community could be characterised as one of the most persecuted peoples in the world. Their religion borrows philosophies from numerous sources (including the Gnostic and esoteric traditions, as well as the mystical Sufi tradition within Islam). They have no formal government or army, and are ethnically Kurdish.

Their persecution by Daesh (Isis/Isil) has been well documented, and in August 2014 around 5,000 Yazidis were massacred around the town of Shengal (or Sinjar) while many thousands were forced to flee to the surrounding mountains. As many as 7,000 Yazidi women and girls were made into Daesh sex slaves. A mass grave of Yazidis was discovered in Sinuni: among the 37 skeletal remains were women and children, some who appeared to be toddlers (the victims had been herded together and beheaded or shot). The Free Yazidi Foundation has also provided details of massacres carried out by Daesh (a very graphic video can be seen here).

The official army of the Western-backed Kurdistan Regional Government (KRG) had abandoned the Yazidi population. It was instead the non-state militias of the Kurdistan Workers’ Party (PKK) and its YPG/YPJ allies which quickly stepped in, rescuing at least 35,000 refugees. Media outlets and governments spoke at the time about non-descript ‘Kurdish fighters’, lumping the KRG and the PKK/YPG/YPJ together as if they were one and the same. In reality, the latter have been vilified and attacked by the West’s powerful Turkish allies.

In the end, Shengal was liberated from Daesh by a coalition of KRG and PKK/YPG/YPJ forces. See the video below for more.

On 16 December 2015, a Yazidi woman (Nadia Murad Basee Taha) gave an impassioned speech to the United Nations. Murad had been enslaved and raped multiple times by Daesh militants, who had also executed her family.

In her address to the UN (see video below), Murad demanded that action be taken to free the several thousand abducted Yazidis that remain enslaved by Daesh. She also asked that the campaign to exterminate the Yazidis and their religious identity be recognised as “genocide”.

Yazidi areas still under Daesh control, she said, should be liberated – so that Yazidis could return and an international project could be conducted to rebuild the destroyed areas and help them to start their lives again.

Most importantly, she asked that international protection be provided to the Yazidi homelands to ensure that future campaigns of genocide against the Yazidis be prevented.

The UN subsequently agreed that what Daesh has done and is doing to the Yazidis is genocide.

On the same day that Tim Farron made his remarks about the meanness of Britain, Murad spoke again to the UN about the plight of Yazidi women still imprisoned by Daesh. Murad and her lawyer, Amal Clooney, also explained to Channel 4 News (see video below) that what has taken place against the Yazidis is a war crime by any definition. Murad made it clear that, despite the death threats made against her for speaking out, she will do everything she can to bring the perpetrators of these horrific crimes to the international courts to see justice.

In July 2015, Yazidi women founded the autonomous Shengal Women’s Council, promising: “The organization of Yezidi women will be the revenge for all massacres.” They do not want to simply “buy back” the kidnapped women, but to liberate them. Meanwhile, the YBŞ (Shengal Resistance Units) and the all-women’s army YPJ-Shengal now form part of the frontline against Daesh (together with other militias).

Theresa May: a weak and immoral leader

Contrast the courage of Nadia Murad with that of British Prime Minister Theresa May, who spoke (around the same time as Murad) about how the UN should ensure that refugees seek refuge in the first country they come to. In the case of the Syrian conflict, that country would often be either Turkey or Lebanon.

Under May’s argument, Europe would have no responsibility (humanitarian or otherwise) to help any refugee from any country that does not immediately border Europe. Some refugees would still make it to Greece or Italy by sea, but May insists they stay there (regardless of how many thousands arrive or of the impact on the economies of those countries). May’s moral get-out clause is that Britain provides millions of pounds of aid to the millions of refugees in the camps in Turkey, Lebanon and Jordan. In other words: out-of-sight, out-of-mind.

To date, of the 20,000 refugees that former prime minister David Cameron promised would be allowed into Britain, the numbers arrived so far are a mere 2,800. Altogether, more than 88,000 unaccompanied refugee children have sought asylum in Europe.

Thousands more may have gone missing (possibly kidnapped by sex traffickers). In Calais, of the 400 or so unaccompanied children, 150 are entitled to live in the UK under the Dublin Agreement. A further 200 are eligible for sanctuary in the UK. So far, just 20 unaccompanied children have arrived in the UK under these arrangements. The British government is placing the burden of responsibility for welcoming refugees on local councils, but they claim they do not have the resources, and are in turn blaming the government. Also, the paperwork involved means months of delays. And so it goes on.

The people who are taking action

The only organisations in the UK taking any real responsibility for intervening in the refugee crisis are Help Refugees UK and Citizens UK, as well as individual activists who simply use their own resources to help. Help Refugees UK are helping many of the unaccompanied child refugees stuck in the ‘Calais Jungle’. Citizens UK are doing what they can to organise the welcoming of refugees by British families. But the numbers are still embarrassingly small. It was only recently that an unaccompanied child refugee – a 14-year-old boy – lost his life trying to get to the UK.

And the right-wing Daily Mail was apoplectic when one refugee – just one! – was smuggled into Britain by Greek-based activists with ‘No Border’, a humanitarian, pro-refugee network. The paper, predictably, talked of a ‘terror threat’, and described ‘No Border’ activists as “extremists”.

Meanwhile, Nadia Murad has been nominated for the Nobel Peace Prize for her continuing work in helping to bring the plight of Yazidis to the attention of the world. Perhaps there ought to be a ‘Meanness’ Prize, too?