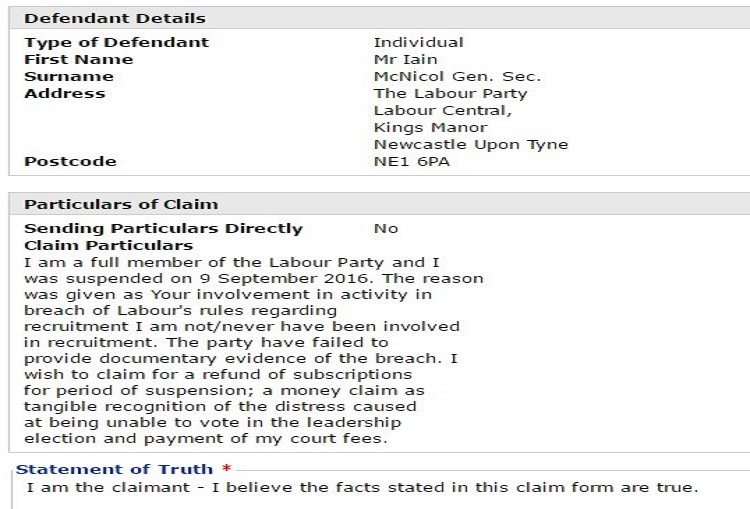 In an extraordinary twist to the ongoing Labour Party ‘purge’, one member is taking drastic action. She’s summoning the party to court over her suspension, in a move which could set a legal precedent for thousands of expelled members. What’s more, this member knows her stuff; she’s a legal advocate for a large public body.

Labour in the dock, again

The party member, whose identity The Canary is protecting but will call ‘Jane’, has made the move after she was suspended on 9 September. The reason initially given was the blanket, nondescript “breach of recruitment rules” which many members have been accused of.

She immediately issued a “Subject Access Request” (SAR). This is a legal mechanism everyone is entitled to use, which forces a company to release all the information it holds on you.

Jane believes that her suspension may be due to a Facebook page she was involved in. As The Canary reported in July, a Just Giving page, which had been set up to financially support people who were having to re-register as Labour supporters, was shut down. She donated, and believes this may be the reason for her suspension. 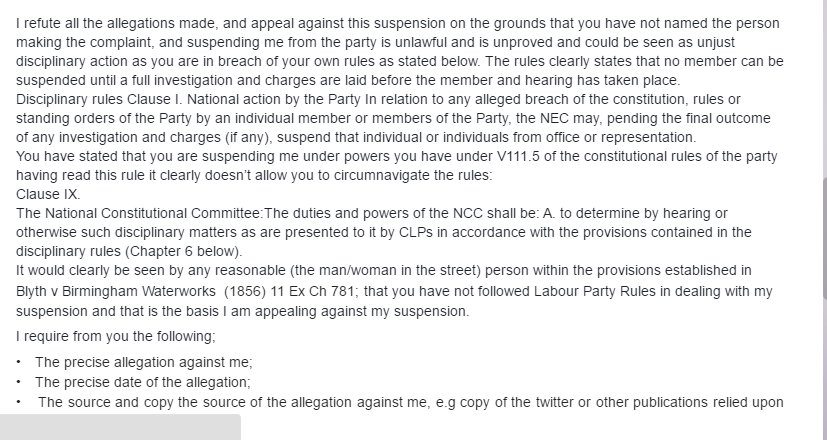 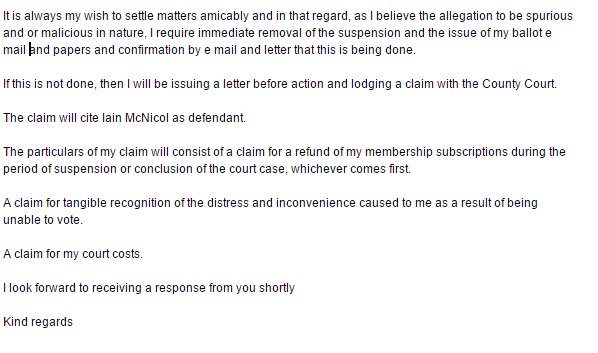 In an odd twist, Jane was repeatedly told that she would still have a vote in the leadership contest.

But the vote never arrived.

Labour has still taken her membership money, and has not said how it got her anonymous Facebook details. Speaking to The Canary, she said:

I’ve been a full Labour member for about 16 months. The ‘evidence’ against me consists of… an extract from a Facebook conversation. When it gets to court, I intend pointing out that Principles One & Four of the Data Protection Act [DPA] have been breached. This renders them liable to a fine from the Information Commissioner’s Office. I will also be requesting tangible recognition (compensation) for the distress and inconvenience caused by not being able to vote, when I was told by them (twice) that I could.

Principle One of the DPA relates to using information about a person fairly and lawfully. Principle Four is about keeping personal information accurate and up-to-date. What Jane is saying is that Labour has breached its “contract” with her, as she never gave permission for the party to use her details other than to contact her. Furthermore, it made no effort to check the information it had was actually hers before suspending her.

If Jane is successful in her case, this could, in theory, set a legal precedent. That would mean that hundreds, if not thousands, of other suspended members could take legal action.

Meanwhile, the apparent anti-Corbyn ‘purge’ has continued within Labour. Countless members have got in touch with The Canary to tell their stories.

One bizarre tale is of a member who had the same names as a Canadian citizen (living in Canada). They were suspended because their Canadian counterpart sent a tweet to one ‘John Tory’. Tory is the Mayor of Toronto, and the Canadian tweeter was congratulating him on his recycling tariff. But Labour banned the UK member, stating that he had shown support for another party. Obviously, a Labour “bot” had seized on the word “Tory” mistakenly.

Another member had his application rejected for the same reason as Jane. He had joined the party as a registered supporter, got his membership card, had been to a local meeting, voted in the leadership election, and then had his membership rejected. The reason was that he had tweeted support for the idea of lending people £25 to join as a registered supporter. But Labour rejected his membership after nine weeks, which appears to break the party’s own rules (which state that provisional membership lasts eight weeks and people can only be rejected during this time).

With voting in the leadership contest now officially over, Corbyn is still on course to win. But what this process has shown is the Labour Party’s disregard for its members. Labour elites should rightly be proud that the party is now reportedly the largest in Europe. But instead, they’ve seemed hell-bent on allowing only the purest of pure (by their standards) to be members.

Where the membership numbers, and members’ morale, will stand after this year’s conference remains to be seen. But if Jane is successful, the Labour Party could have a long few months of court cases ahead of them.

Note: Please remember that all comments made on social media are done so at your own risk.

– If you feel you’ve been ‘purged’, take this online survey, or this one.

– Request all your own data that the Labour Party holds on you.

– Read The Canary’s other articles on the Labour leadership election.

– Support The Canary, so we can keep bring you the news that matters.