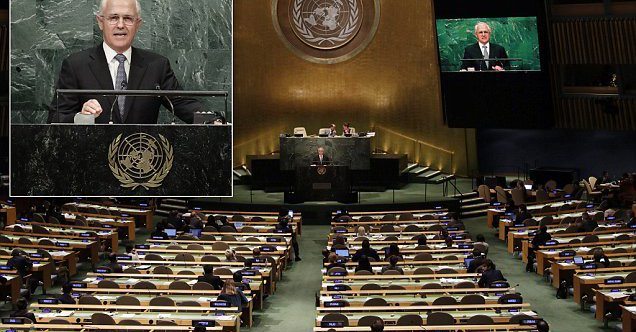 Australian Prime Minister Malcolm Turnbull cut a lonely figure as he outlined his immigration policy at the UN on 20 September. Increasingly under pressure for his government’s transport of refugees from the open seas to detention centres on Manus Island and Nauru, civil society groups have been stepping up their resistance to what they consider his divisive and damaging policies.

You wouldn’t know that from his speech, though. Speaking to a fairly empty room at the UN General Assembly and at a special meeting on refugees hosted by Barack Obama, he only referenced the offshore detention policy indirectly.

But Greg Barns and Anna Talbot of the Australian Lawyers Alliance have since made it very clear what they think about Turnbull’s views:

It is clear that Australia’s current approach breaks the commitments we have given. People are punished when they ask us for help. They are turned around in international waters, sent back to countries where some of them have been tortured or even killed, in direct conflict with our non-refoulement* obligations. If they do reach Australia (and none have for quite some time), they are sent to places where a UN expert has said that the right to be free from torture and ill-treatment is being violated.

Meanwhile, Australian Lawyers for Human Rights (ALHR) decided it can no longer wait for Turnbull’s government to find a viable solution to the offshore detention of refugees. They have instead taken direct action, sending letters to the foreign ministers of four countries (Canada, New Zealand, Germany and the USA), seeking their assistance in finding homes for the refugees and asylum seekers held illegally on Nauru and Manus Island.

New Zealand has already said it will take 150 refugees detained offshore. And Canada, under Prime Minister Justin Trudeau’s leadership, currently has an excellent record when it comes to refugee intake.

Here are the four letters: to Germany, to the USA, to New Zealand and to Canada.

The ALHR also issued a press release on the matter, which included the following statement:

If the Australian government will not act, then the international community must. Resettlement on Nauru or Manus Island is not a feasible or durable solution for those found to be refugees.

To add to Mr Turnbull’s woes, one of four submissions made to the International Criminal Court (alleging that Australian government ministers have committed crimes against humanity in relation to the country’s offshore refugee policy) has been recently updated.

The new submission attempts to show how successive Australian governments have avoided international human rights conventions, and requests that the International Criminal Court begin investigations into the actions of named Australian ministers.

Here, exclusively, is a copy of that updated submission.

In August, Human Rights Watch issued a damning report, illustrating the dreadful conditions at the Nauru detention centre. This report came hard on the heels of the publication of the ‘Nauru Files‘ by Guardian Australia.

Also in August, an article in The Canary suggested that the Australian government has forfeited any right to manage its refugee programme. The task of re-settling refugees on Nauru and Manus to appropriate countries should thus be left to an NGO or international body.

In the same month, Save the Children and UNICEF published an 84-page report on the human and economic costs of the offshore refugee processing programme. One of its recommendations was for the government:

to publicly commit to a plan, with timelines, for resettlement of those refugees currently in Nauru and Manus Island. Australia should take full responsibility for finding a permanent resettlement solution for these refugees. If Australia continues to refuse to resettle them in Australia, it must ensure third country resettlement by the end of 2016 in line with certain minimum criteria [see pages 64-65 for that criteria].

With the latest intervention from the Australian Lawyers for Human Rights, perhaps a solution can finally be found and the suffering can finally end.