David Cameron gets away with the UK's biggest crime in years, thanks to the mainstream media - Canary 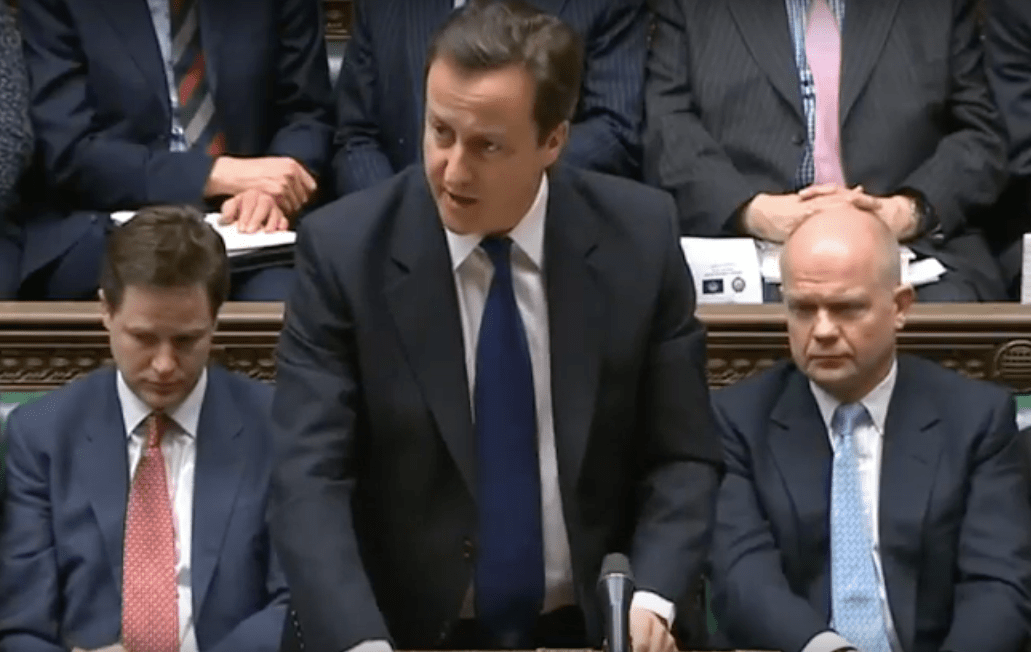 As Theresa May’s government seeks to exempt British troops from the European Convention on Human Rights (ECHR), one investigation about UK-fostered destruction abroad has been seriously under-reported and, some might say, swept under the carpet. According to one media watchdog, this proves just how much the mainstream media misinforms the public on the most important matters of the day.

On 14 September, a parliamentary report on the 2011 military intervention in Libya was released. It was a damning indictment of British involvement, but most media outlets remained quiet, focusing instead on the Labour Party leadership race.

The intervention in Libya

In the midst of the so-called Arab Spring in 2011, Libya was thrown into a bloody civil war. Undeterred by the ghosts of past interventions abroad, NATO countries quickly took a stance in favour of military intervention. There was less opposition than there was before the 2003 invasion of Iraq, and the image in the media was primarily one of Western nations saving the Libyan people from Colonel Muammar Gaddafi’s crackdown.

Only a few voices in the political and media worlds openly claimed that intervention was a bad idea. But the recently released Libya report was a clear vindication of these voices.

Where was the cross-examination?

September’s report stated that the policy to intervene in Libya:

…was not informed by accurate intelligence. In particular, the Government failed to identify that the threat to civilians was overstated and that the rebels included a significant Islamist element. By the summer of 2011, the limited intervention to protect civilians had drifted into an opportunist policy of regime change. That policy was not underpinned by a strategy to support and shape post-Gaddafi Libya.

In parliament, David Cameron had stated that intervention would be necessary to avoid another Srebrenica – a reference to the Bosnian town that suffered a genocide after Serbian forces broke through a peacekeeping operation in 1995. He gained overwhelming support for military action, with only 13 MPs (including current Labour leader Jeremy Corbyn and Shadow Chancellor John McDonnell) voting against it.

In the same vein, Britain’s mainstream media overwhelmingly promoted Cameron’s campaign, with only a few lone voices like watchdog website Media Lens repeatedly pointing to the lack of evidence for Cameron’s assertions (or, more accurately, what it calls his “lies”).

Yet another British war criminal?

Three weeks after Cameron assured parliament in March 2011 that the object of the intervention was not regime change, he signed a joint letter with President Obama and French President Sarkozy committing to “a future without Gaddafi”.

That these policies were illegal is confirmed by Cameron himself. He told Parliament on 21 March 2011 that the UN resolution “explicitly does not provide legal authority for action to bring about Gaddafi’s removal from power by military means”.

Media Lens insists that this action makes Cameron a war criminal, equating it with Britain’s invasion of Iraq in 2003.

Did no one want to see the evidence?

The media watchdog also slams the lack of scrutiny provided by mainstream news outlets like The Guardian, the BBC, The Telegraph, The Times and The Independent, and even some of the voices sitting on the ‘left’ within them.

Those outlets kept pointing to the moral obligation we had and the ‘responsibility to protect’ – an international obligation to intervene in order to protect civilians. But none pulled apart the so-called evidence the intervention was based on, or other evidence which would call into question the entire dynamic of our role in Libya and elsewhere in the Middle East (as Media Lens pointed out on 29 June 2011, 12 October 2011 and 27 October 2011).

Even with the publication of the parliamentary report on Libya, the media has failed to acknowledge the disingenuous and essentially illegal motives for the UK’s role in Libya. The Guardian still claims that, despite ‘mistakes’, the motive was essentially humanitarian, saying “memories of Srebenica spurred on decision-makers”.

But the truth is that the UK, the US, and France were all looking for regime change, further influence in the region, and a greater share of its oil.

This was not so much a ‘mistake’ as it was calculated misconduct.

And it’s a formula that is repeated all too often. Media Lens writers consistently remind us about the column inches granted to the same warmongers now looking to maintain their presence in Syria.

Let down again and again by the mainstream media

While some mainstream media outlets may be slightly to the left of others, they all essentially sing from the same song sheet. The music might be different, but the lyrics are the same. Fortunately, it seems that many people are wising up to this. And the two Labour leadership races won by Jeremy Corbyn in spite of overwhelming media hostility are one sign of this.

There’s little wonder people have such low levels of trust in the mainstream media when policies with such huge ramifications like the intervention in Libya were left with almost no scrutiny. The press rarely considered consequences like: state collapse; internal conflict; humanitarian and migrant crises; human rights violations; and the spread of weapons and groups like Daesh (Isis/Isil).

And little has changed. Even today, the continuing Libyan crisis is virtually absent from the media. But if we’re to avoid another disastrous intervention in the future, we need to keep asking serious questions about where we’re getting our information from.

– See more on Libya, and read more international reporting from The Canary Global.

– Support The Canary so we can keep holding the powerful to account and providing an independent alternative to the corporate mainstream media.