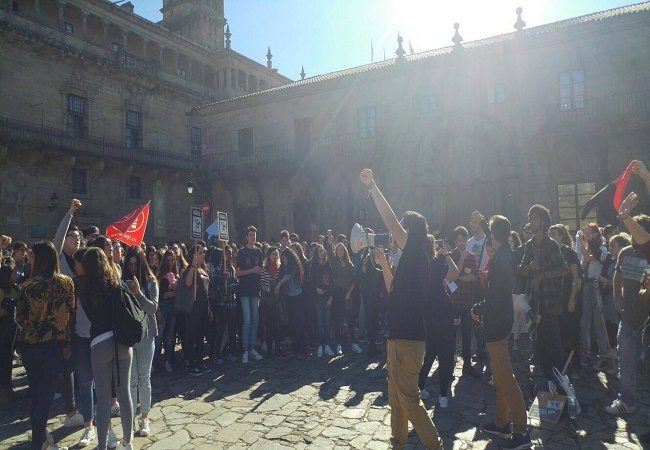 Students and parents staged a mass strike in Spain on Wednesday 26 October. The action against the Spanish government’s education reforms took place in more than 50 cities [Spanish] across the country. And the “gentrification” of Spain’s education system, as the protesters call it, bears remarkable similarities to the grammar school reforms Theresa May wants to push through in the UK.

In the name of austerity

The Spanish Students’ Union (Sindicato de Estudiantes/SE) is protesting against the swathes of cuts to education seen in recent years. The government has cut €150bn from education budgets since 2012 due to austerity measures. But while it cut the education budget by 21.9%, it cut the military budget by only 8%. Investment in primary education fell by 36.5%, and in higher education by 62.5%. This was alongside the implementation of various reforms. The SE says that this has created an education system which is “accessible only to those who can afford to pay for it”.

The government reforms include so-called ‘revalidations’. These force students to take exams at the end of primary, secondary and post-secondary education. Students must pass the exams so they can continue studying and receive the qualification that corresponds to that level of education. The changes come in tandem with a rise in university fees of up to 66%. The study of the Catholic religion has now also been forced onto the curriculum.

The return of Franco?

The SE claims that the reforms, coupled with the hike in fees, are essentially a gentrification of education. That is, the government is actively trying to stop young people from poorer backgrounds going to university. The union likens [Spanish] the measures to reforms under Spanish right-wing dictator Francisco Franco (in power from 1936 to 1975). Franco gave the Catholic Church power over education during his dictatorship, and introduced revalidations to filter out working-class children.

We do not accept a return to the Francoist revalidation of our parents’ time, when only those who had the financial means could study.

The strike on 26 October had a turnout of around 90%, according to government sources [Spanish]. It was the first industrial action of the new educational year. It was also the first under Íñigo Méndez de Vigo, Spain’s new education minister.

Madrid effectively saw a complete general strike, as all teaching unions backed the SE action. In other parts of Spain, such as Andalusia and Catalonia, teachers’ unions also declared their backing of the SE.

If this attack is carried through, we are talking about returning to an era in which education was only something for a privileged minority. The objective is to destroy public education and turn it into a market service, from which private education bosses can make big profits.

We call on the youth of the world, who all suffer along with us the attacks and cuts to education by pro-capitalist governments, to support us on this day.

The reforms in Spain will see an almost two-tier, privatised education system. They have strong similarities to the Conservative government’s grammar and free school plans in the UK. And like Spain, critics claim that only pupils who can afford private tutoring to get them through exams will progress academically. If the UK values its state education system, it may do well to look at what’s happening in Spain, and take note.

– Read The Canary‘s other articles on education.

– Support The Canary, so we can continue to bring you the international news others don’t.