As the House of Commons erupts over Brexit, May avoids one very important question [VIDEO] - Canary 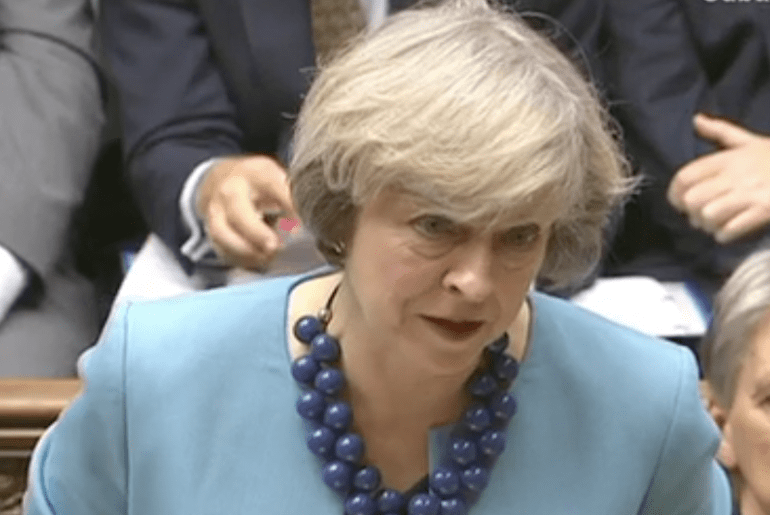 During Prime Minister’s Questions (PMQs) on 26 October, Bolton MP Yasmin Qureshi asked Theresa May to meet with her and hear about events in Kashmir. In the worst scenario, these events could lead to a nuclear war. But the PM didn’t seem to care. After spending most of her energy on an earlier response to Jeremy Corbyn’s dig over Brexit, she left just enough time to snub Qureshi.

The question was a request to discuss human rights abuses in the troubled region between India and Pakistan.

In the Indian occupied Kashmir in the last three months, 150 people have died, 600 people have been blinded by the use of pellet guns, and more than 6,000 injured (many critical), unexplained disappearances, food and medicine shortages. Would the Prime Minister meet with me and other cross-party colleagues to discuss these abuses and the issue of self-determination of the Kashmiri people as was set out in the resolution of the UN in 1948? And can she raise this matter with the Indian Prime Minister?

Kashmir is a matter for India and Pakistan to deal with. But the Foreign Secretary has heard her representation and I’m sure will be interested in taking those issues up with her.

Foreign Secretary Boris Johnson nodded in agreement with May, perhaps indicating he would not be that interested. Qureshi, meanwhile, might feel that May has just ignored her concerns.

But what does Qureshi actually expect the UK government to do?

The deal with Kashmir

To understand Britain’s role, we just have to take a quick look at the history books.

Kashmir is a territory that shares a border with both India and Pakistan. The dispute in Kashmir dates back to 1947. As such, it is older than the dispute between Israel and Palestine, and is one of the longest international conflicts in modern history.

When India gained independence from British colonial forces, Pakistan also formed as a state for Muslims. This was due to religious tensions at the time. There were 650 states run by princes. And the idea was that each prince could decide which country to join. In practice, it was the people who influenced the decision. But one state, Kashmir, never made the decision. Its prince, Maharaja Hari Singh, was Hindu. Most of his subjects were Muslim. He therefore decided to remain neutral. But Indian and Pakistani relations have been far from neutral as a result of this decision.

India occupied the State of Jammu and Kashmir in 1947. Tensions have been present in the region ever since, but have boiled over again in recent months.

India accuses Pakistan of allowing terrorist attacks in Indian-occupied Kashmir. And India has carried out surgical strikes against Pakistani militants.

What can the UK do?

The UK should be concerned that two nuclear states are on the brink of war. It holds good relations with both India and Pakistan. And it could therefore use diplomacy to hold discussions which could help to avert further escalation.

But Qureshi didn’t ask May to just help resolve the dispute. She also mentioned human rights abuses in the territory. One London meeting on Kashmir, for example, has raised concerns about mass graves. And 20,000 women have no idea if their husbands are dead or alive.

Qureshi simply wants May to hear the evidence. And then, perhaps, she could use Britain’s good relations with India and Pakistan to help end crimes against humanity.

May’s blind eye probably revolves mostly around maintaining good trade relations with India and avoiding a conflict with Pakistan – which is key to NATO-armed action in both Afghanistan and tribal Pakistan. But when war between two nuclear powers is on the cards, finding a solution in Kashmir is an issue which should matter to us all.

[Editor’s note: From the late 1970s onwards, UK ally Saudi Arabia and its state doctrine have played an increasing role in the Kashmiri conflict.]

– Write to your MP, Boris Johnson, and Theresa May to ask them to act on the Kashmiri question.

– Read more articles on international issues in The Canary Global.