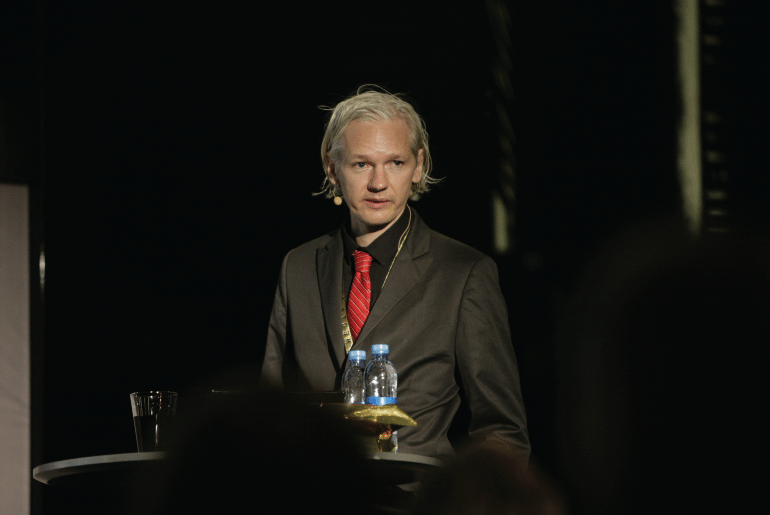 Julian Assange and Wikileaks have received tributes from very noble sources for their work. But now, they’ve also received one from David Duke, the former Imperial Wizard of the Ku Klux Klan (KKK).

David Duke and the KKK have long been supportive of Donald Trump’s presidential campaign. And because WikiLeaks has helped Trump (intentionally or not), those who support the new US President are very appreciative.

Duke hasn’t given up on his racist or imperialist beliefs since leaving the white supremacist group. And his comments on Twitter reveal his strong support for Trump’s mission:

Donald J. Trump now has the chance to become one of the greatest Americans to have ever lived – we have the moral high ground, 100%!#MAGA pic.twitter.com/l9EsAMrMKR

All you filth in Hollywood, who promised to leave -> BYE BYE – your poison is no longer wanted here -> GET THE HELL OUT!#PresidentTrump pic.twitter.com/6lLr7IgqJn

In the run-up to the US elections, Wikileaks released many emails about Hillary Clinton and the Democratic Party. And it came in for criticism because it didn’t release anything about Donald Trump or the Republican Party. This led to accusations from the US government that Russia was using Wikileaks as a tool to damage Clinton.

Trump was clearly more favourable towards Russia and Putin than his opponent was. And several of his businesses, associates, and advisers are linked to financiers within both Russia and Putin’s inner circle. There is also speculation that Trump is being used as a “useful idiot” by Russia to destabilise NATO. Evidence for this includes Trump ignoring or denying American intelligence on Russia; and Trump spreading propaganda and misinformation that originated from Russian sources. One Mother Jones article even claims Trump has been “compromised” during visits to Moscow.

What is Assange’s position, then?

Assange released a statement on the eve of the election, in which he said:

We publish material given to us if it is of political, diplomatic, historical or ethical importance and which has not been published elsewhere. When we have material that fulfils this criteria, we publish.

At the same time, we cannot publish what we do not have. To date, we have not received information on Donald Trump’s campaign… or any of the other candidates that fulfils our stated editorial criteria.

This is why, irrespective of the outcome of the 2016 US Presidential election, the real victor is the US public which is better informed as a result of our work.

WikiLeaks remains committed to publishing information that informs the public, even if many, especially those in power, would prefer not to see it. WikiLeaks must publish. It must publish and be damned.

Regardless of whether or not Assange had links with Russia or Trump (which seems unlikely considering his comments), it is clear that the leaks helped Trump; that Trump will help Russia; and that Russia may have aided Trump.

But WikiLeaks and classified disclosures are not going away. And they do not exist in a vacuum. This means that, if the world wants Trump gone, parties opposing him (and their candidates) cannot afford any degree of corruption whatsoever. And neither can the media.

– Engage with Wikileaks and make your own mind up.