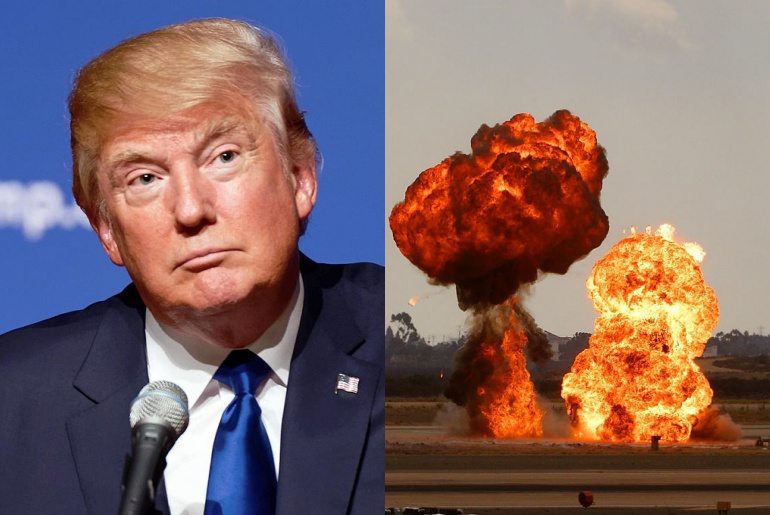 While the world reels from Donald Trump’s election victory, it’s becoming clear that corporate America has been a big winner. Shares in arms companies, private prisons, and big pharma have all rocketed since the results came in. And that’s a big cause for concern – both at home and abroad.

BAE Systems, the world’s third largest arms company, saw its figures reach a record high following the vote. Among many other things, BAE Systems sells Saudi Arabia the jets they have used to bomb children and other civilians in Yemen.

Speaking to The Canary, Andrew Smith from Campaign Against the Arms Trade (CAAT) stated:

It’s the threat of war and conflict that keeps the arms companies in business. They thrive on instability. The fact that BAE will be toasting a Trump victory tells us everything we need to know about what the markets think of his foreign policy approach.

What is good for arms companies is never good for civilians. The work of human rights campaigners and those opposed to militarism, both in the US and beyond, could not be more crucial.

Arms dealers profit from calamitous situations. Following the Paris attacks and the UK’s decision to bomb Syria, there was a steady rise in their share prices. And they have been quick to gloat over how the situation in the Middle East is good for business.

Lockheed Martin is the world’s largest arms company. At a conference in 2015, its Executive Vice President Bruce Tanner spoke of the “indirect benefits” of the conflict in Syria, largely in relation to Turkey shooting down a Russian plane. He said this event made Syria “an incredibly dangerous place to fly”. And he celebrated this escalation in conflict, because it would mean more sales of Lockheed’s F22 aircraft. He described the company’s increase in profits as:

an intangible lift because of the dynamics of that environment and our products in theatre.

A sign of things to come in the US

And it’s not just arms companies profiting from Trump’s victory. There has also been a massive spike in the shares of private prisons (which Trump supports):

#privateprisons stocks spike after Trump victory. A sign of things to come. pic.twitter.com/IFrTO90XIf

The Obama Administration was phasing out private prisons. And Hilary Clinton vowed to abolish them. Speaking about the decision to end their usage, Deputy Attorney General Sally Yates said:

The fact of the matter is that private prisons don’t compare favorably to Bureau of Prisons facilities in terms of safety or security or services, and now with the decline in the federal prison population, we have both the opportunity and the responsibility to do something about that.

Trump, on the other hand, is not only a supporter of prison privatisation. One of America’s biggest prison companies – the GEO Group – actually funded his campaign. The group currently runs both prisons and immigration detention facilities, and donated $673,200 to Trump’s efforts. And during his campaign, Trump said:

I do think we can do a lot of privatizations and private prisons. It seems to work a lot better.

The decline of health

In contrast, shares in pharmaceutical companies soared. Pfizer, which Oxfam has criticised for putting life-saving drugs out of the reach of poor people in developing countries, has seen its shares jump by 9.8%.

Overall, while there may not have been the big market crash that was predicted in the early hours of the morning, it only takes a quick look at the companies who are profiting from Trump’s win to see which direction the US is headed. And that direction should worry us all.

– Find a local CAAT group and help to stop the arms trade.

– See more on Donald Trump at The Canary Global. And visit our Facebook and Twitter pages for more of our international coverage.