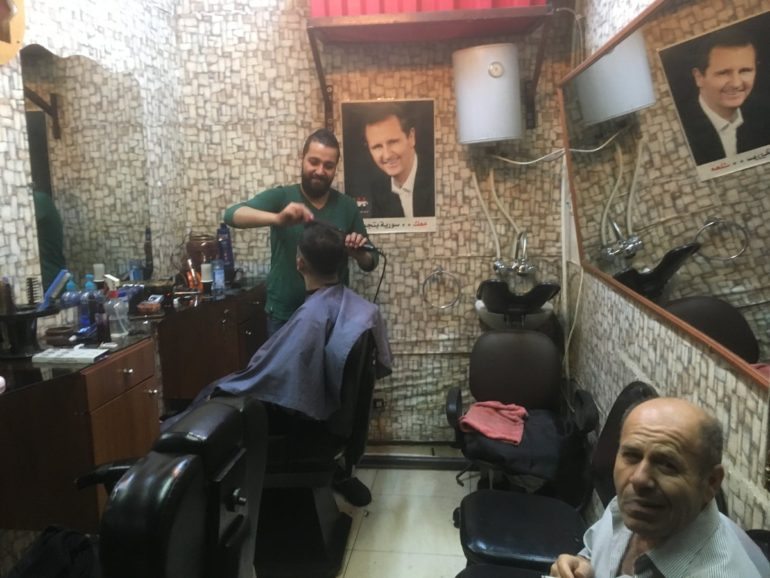 There’s a celebratory and optimistic mood on the streets of Damascus. Donald Trump’s election victory in the US has resulted in a general sigh of relief from pro-government areas of Syria. And this might come as a surprise to those familiar with Trump’s inflammatory rhetoric directed against Muslims and Middle Eastern immigrants in general.

We could perhaps consider citizens in government-held areas of war-torn Syria ‘single issue voters’ in their attitude towards the US election. The reason? On the issue of Assad’s future, they see Trump as a friend.

In 2013, the US and its allies considered attacking Syrian government positions in order to bring the country’s civil war to an end. This attack never materialised. But influential policy makers in the West have periodically continued to push for Assad’s removal through direct military action.

Proposals have included the imposition of a ‘No Fly Zone’ (widely considered an act of war), strategic airstrikes on regime facilities and infrastructure, and an all-out attack on the Damascus-based government itself. For Syrians I spoke to, Hillary Clinton most represented this push for escalation against the Syrian government.

3. No attacks against regime

I personally surveyed a dozen or more Syrians in brief ‘man on the street’ interviews while on the ground in Damascus recently. All hoped for a Trump presidency over the perceived ‘pro-war’ Hillary Clinton. Of course, this is just anecdotal evidence. But the rationale of ordinary Syrians I interviewed briefly received general confirmation when I met and spoke to private advisers to the Syrian government while attending a conference organised by the British Syrian Society.

Clinton seen as another Bush

A Christian woman named Reem, who I spoke to in a suburban neighborhood of Damascus, considered Clinton to represent a continuation of George W Bush’s interventionist policies:

Look at Iraq… and look what she did in Libya. We don’t want Syria to become another Libya.

This was a common refrain among people I spoke to. They generally perceived Trump as being more ‘hands off’ in his approach to the embattled Assad government, and Clinton as desiring regime change. Another young woman, echoing similar sentiments, said:

Hillary wants to bomb us, but Russia is good, and Trump is OK with Russia.

The quote above, of course, was a reference to Trump’s generally relaxed approach to Russia, and his reluctance to condemn Russian intervention in the Syrian war. Indeed, Trump’s election was officially lauded in Russia’s parliament.

In just about every taxi around Damascus, I heard “Putin good!”. Eager Syrians, meanwhile, constantly asked me “Are you Russian?”, ready to heap praise on me personally. Disappointment soon followed when I responded with an emotionless “no”.

There were also uncomfortable moments when passersby merely began shouting random pro-Russian slogans in my direction, something which brought me unwanted attention as an American trying to keep a low profile. It seemed pro-Russian and pro-Trump sentiment went hand in hand.

the devil you don’t know.

Al-Khoei argued that Trump’s stated perception of the Middle East as one big “quagmire” for US policy means he could rip up the conventional “Washington playbook”, which gravitates toward military solutions to crises such as Syria.

Indeed, the Assad government has already begun reaching out to Team Trump through intermediaries. And I have personally recevied confirmation that a private adviser to the Syrian government is going to meet with a Trump national security adviser in Washington DC this week.

In short, while the Syrian side still sees Trump as largely an ‘unknown’ concerning Assad’s future, it remains cautiously optimistic.

Stay tuned for Part V in our series of articles from the ground in Syria.

– Watch [free] the important documentary Leading to War, which chronicles how the public was misled about the invasion of Iraq.

– See other Global articles from The Canary, and more on Syria here.

Featured image via Brad Hoff for The Canary